Home Investing Living Paycheck to Paycheck on $100,000 a Year

I’ve looked at data in the past that shows millennials are behind previous generations at their age when it comes to building wealth.

Bloomberg’s Allison Schrager took the other side of this one: 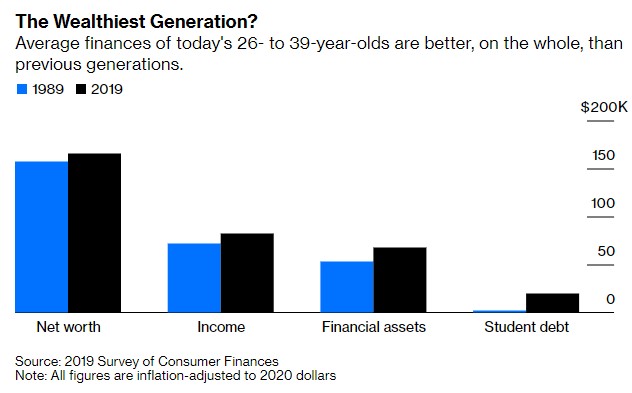 Surprisingly, millennials in the 26-39 age range are actually better off than people at that age in 1989.1 The biggest difference here is they have far more student debt.

But over the long haul that’s a good thing. This debt is an investment in their future earnings power which should be higher:

So millennials not only have more financial assets, on average, than the previous generation, but the debt they’ve taken on should only help them increase those assets in the future.

The other difference Schrager pointed out is 52% of people 26-39 owned a home in 1989 versus 48% today. Maybe young people aren’t as enamored with homeownership. Or maybe they are all playing catch-up over the past year. We shall see.

However, there was a survey that came out this week that paints a slightly different picture.

These numbers were even worse for millennials, where 70% of them live paycheck-to-paycheck including 60% of those making $100k or more.

This seems absurd. How is that possible?

Well some of these people could live on the coasts where the standard of living is much higher and your money doesn’t go as far. The results could also be bunk. I’m generally anti-survey because everybody lies on these things so take these results with a grain of salt.

But it could also be a case where living paycheck-to-paycheck has different connotations to different households. This is from the survey’s researchers:

Living paycheck to paycheck sometimes carries connotations of barely scraping by and of poverty. The reality of a paycheck-to-paycheck lifestyle in the United States today is much more complex, and the current economic environment has made it even more complicated.

Many high earners increase their standard of living when their income rises. Some people either prefer a more expensive lifestyle or fall victim to lifestyle creep. For many this is a choice they make. What we consider necessities has certainly changed over time.

I would be shocked if this 60% figure didn’t include people who are already saving in a 401k or similar retirement vehicle. I do like to treat my savings like a bill payment but if that’s the case you’re not actually living paycheck-to-paycheck.

And if you are making six figures and truly living paycheck-to-paycheck, there’s never been a better time to start than now.

There are certainly people in this country that are hurting financially. But collectively, U.S. households are in better shape financially than they have ever been.

Michael and I discussed this survey and much more on this week’s Animal Spirits video:

Subscribe to The Compound for more of these videos.

Further Reading:
Life is Too Short to Save Everything

1Check out this piece from Nick too that looks at these numbers from a number of different angles.

Quanterix Stock: A Way to Play the Proteomics Boom