Home Investing How Much Money Do You Need To Make To Be Considered Rich?

If the last year or so has taught us anything about U.S. government debt, it should be that we don’t need to “pay” for more spending.

The money is essentially created out of thin air by issuing more U.S. treasury bills and bonds.

It’s not like the government came to each household and asked for more tax revenue before spending trillions of dollars.1

There is, however, a psychological and redistribution lever the government can pull when it comes to tax policy. Many people have been calling for higher taxes on the wealthy for years now. It looks like they could get their wish.

But how do you even define wealthy?

According to people with knowledge of Joe Biden’s tax plan, that number is households who make $400k a year or more. CNBC reports no one making less than $400k (or $200k for individuals) will see a tax hike and only money above $400k that people earn will see an increase.

This represents less than 2% of all households but constitutes an estimated 25% of income in this country.

I’m sure there are people who live in a place like San Francisco or New York City who would scoff at this distinction but it’s hard to argue when looking at the income levels of the country overall:

The Pew Research Center broke things down by lower, middle and upper income levels to show how things have changed over time:

So while the middle class has shrunken over time, part of the reason for that is more people have moved into the upper class. 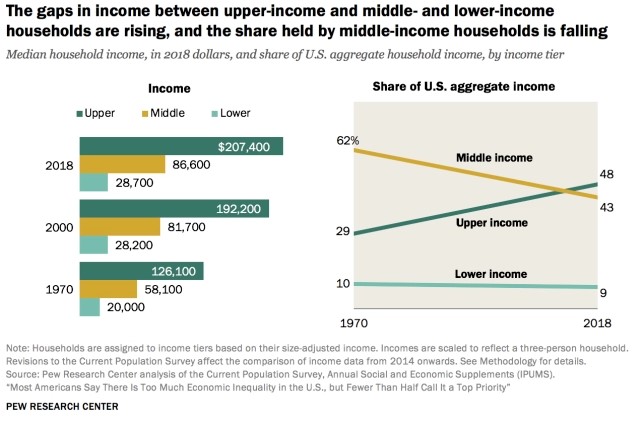 And the share of income going to upper income households has exploded since the 1970s while the share going to the middle class has fallen. So you could quibble with the reasons for increasing taxes right now but it’s understandable this is the group the government is choosing to go after.

The problem for many people is once you make more money, you probably spend more of your time with people who make even more money. So on an absolute basis you are making more than the majority of the country but on a relative basis you don’t feel all that wealthy because there are always going to be people in your peer group making more than you.

Obviously, different levels of income can get you further in certain areas of the country than others. Just look at the debt levels by state from the New York Fed:

Real estate is more expensive in places like California and New York and cheaper in places like Michigan and Ohio.2 There are always trade-offs in where we choose to live from weather to living standards to job prospects to income to proximity to your family and more.

I understand earning six figures may not feel like a lot of money in some places.

But it’s also important to remember that we’re talking about income here when trying to define wealth. Income is not wealth. Spending is not wealth either. Spending can help you live a rich life if you spend your money on the right things but it’s not the same thing as wealth.

Wealth is the income you don’t spend. Wealth is what you set aside from your income. Wealth is failing to keep up with the Joneses (at least when it comes to buying stuff).

There are many factors that impact your ability to generate wealth. Where you live is one of them. The family you were born into can help (or hurt) as well. Then there are things like career choices, education, opportunities, investment skill and luck.

Your level of income does help a lot.

But income is just the first step. If you don’t have the ability to save and live below your means you will never truly build wealth.

This is true no matter how much money you make.

Michael and I discuss the idea of how much you have to make to be considered wealthy and more on this week’s Animal Spirits video:

Further Reading:
The 3 Levels of Wealth

1Inflation is the biggest risk, not running out of money.

2On the other hand, people in places with higher housing prices have also likely seen bigger gains as homeowners.

Who Owns Stocks in the United States?