It could always be worse.

This is one of those things people often say to make themselves or others feel better. It’s a conversation ender. Stops you in your tracks if you’re whining about some thing or other. Only takes you a second to realize they’re right. What the hell are you complaining about, did you hear about Joe down the street? Or Stephanie that you went to high school with? You don’t even know the meaning of the word problem compared to them.

I’ve been watching these videos on Instagram where small businesses tell their stories of hardship and then Dave Portnoy from Barstool facetimes them to say “We got you, don’t worry.” Marcus Lemonis from CNBC challenged Dave to put his money where his mouth was after a series of rants about how the shutdown was destroying business owners’ lives. Dave accepted the challenge and has raised over $10 million so far. One by one he’s getting back to the moms and pops who’ve submitted videos to Barstool asking for help. He’s not just writing a check, he’s committing to continue sending checks for as long as the pandemic continues. I know I’m super basic, but I get tears welling up in my eyes every time I watch one of these.

I had a tough year personally but a good year professionally. Are these two things even distinct from one another anymore? I don’t know where one ends and the other begins, I’ve never been very good at compartmentalizing. I am my career and my career is me. It ate me and transformed me. Peter Parker and the Venom suit.

We did a good job as a firm and I thank God my business hasn’t experienced any sustained issues. The switch to remote work went okay, mechanically speaking. But personally, emotionally, I’ve spent the last ten months with what seemed like the weight of the world on my shoulders. Took this shot in Manhattan Tuesday night. I feel you, big guy:

I stopped talking to a lot of people. I withdrew. Spent so much time alone that I’ve established a running dialog in my head so amaranthine that I almost get offended when someone intrudes on it by attempting to talk to me. Every day the same: Wake up, sit by myself, Zooms, emails and phone calls, back home to the wife and kids, knife fights and turf wars til bedtime, books and tequila til the lights go out. Ironically, the home life part was harder than the work life part most of the time. We fought like wild animals until I got a small office in the next town over. Best decision I made all year.

All things considered, it could always be worse.

My firm’s CFO Bill Sweet reminded me that not once during the whole year did any of our people have to worry about paying their bills or losing their health insurance. If we accomplished nothing else in 2020, this would have been enough for me. No matter what went wrong this year, the mantra I kept repeating to myself was Survive and Advance. Survive and Advance.

In comparison to the stories of other small business owners – the ones you see in the Barstool videos – I’ve been lucky. My complaints look and feel ridiculous in the shadow of what others are going through right now. Yours too, probably. Because no matter who you are or what you’re dealing with, it could always be worse.

I worked for an idiot savant once, at a brokerage firm long ago and far, far away. He was terrible at everything except one skill in particular – convincing other people he wasn’t terrible. He had the clothes, the demeanor, the country club membership of a guy who had his life together. He didn’t, but no one could have guessed. Anyway, one month (pay period) after a particularly horrendous run of crushed stock prices and failed commission opportunities, I walked into his office and just unloaded on him. All my problems, complaints, issues, etc. He says to me, “Josh, if everyone you know were to sit in a circle and put all of their problems into a pile, if given the choice they would all take back their own.”

I don’t know if that’s always true, but I have found that it’s usually true. I certainly would take back my own problems today. My family is healthy and my business is okay.

If you’re reading this blog post, chances are you’re focused on allocating your assets, not choosing which debt to pay off and which bills to ignore. So you’d most likely take your own problems back out of the pile too. It could always be worse.

An even bigger idiot

One day – it might have been a Tuesday or maybe a Sunday, what’s even the difference anymore? – I was moping around the house feeling sorry for myself. Some deal fell through or some piece of shit was harassing me on the internet, whatever it was. And my daughter asks me “What’s wrong?” Whatever I said, she was like “Dad, you realize I missed my eighth grade dance and my junior high school graduation, right? Are you kidding me?” That’s really how she talks, wonder where she gets it from.

I must have sounded like the biggest idiot on earth to her in that moment. There are 125,000 people currently in the hospital with the virus. Right now. Over 3000 people a day passing away. Millions of people suffering through job loss and illness and crushing debts and existential uncertainty. You snap out of it real quick when you look around. Perspective.

“Be kind, for everyone you meet is fighting a hard battle.”

I will never forget.

I appreciate it. And I hope I’ve paid it forward. I have found that helping others is the best distraction from my own issues. As a community we did epic stuff for organizations like Wall Street Bound and the Harry Chapin Food Bank this year. I intend to do a lot more of this sort of thing going forward.

I got a text the other day from the biggest smartass I know. Haven’t spoken to him in years. He said, “Happy New Year dont die”…

How does one respond to that? Laugh/cry emoji.

Happy New Year, don’t die is a pretty fitting way to say goodbye to 2020. This one’s in the books. Another one to hang in the gallery. See you next year. 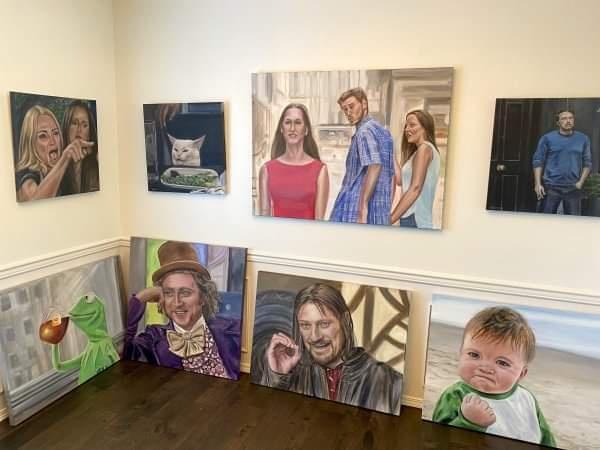