The chorus is growing louder for Joe Biden to cancel some or all student loan debt for borrowers once he is inaugurated. This is from NPR:

President-elect Joe Biden has affirmed his support for erasing some student debt “immediately.”

Student debt forgiveness was a major campaign plank of some of his more progressive rivals for the Democratic nomination, but it remains controversial even among some Democrats.

In answer to a question at a Monday press conference, Biden repeated his support for a provision passed as part of the HEROES Act, which the Democratic-controlled House updated on Oct. 1. The provision calls for the federal government to pay off up to $10,000 in private, nonfederal student loans for “economically distressed” borrowers. Biden specifically highlighted “people … having to make choices between paying their student loan and paying the rent,” and said the debt relief “should be done immediately.”

Michael and I discussed the possibility of the government wiping out some or all student loan debt for borrowers on this week’s Animal Spirits:

I don’t actually think the government is going to cancel credit card debt and I would be surprised if all student loan debt gets canceled.1

This discussion did get me thinking about which type of debt is a bigger problem for the economy. Here are the outstanding debt levels for both student loans and credit card debt:

Student loans outstanding passed credit card debt in 2010 and hasn’t looked back since.

Credit card debt fell following the Great Financial Crisis and has ticked down from the pandemic as well. It may seem counterintuitive for borrowing to slow during a recession but this likely has more to do with the banks reining in the availability of credit considering credit cards are unsecured debt.

Based on my research, the average student loan interest rate is around 6% while credit card rates remain pegged at closer to 15%. If we mapped those rates onto the $1.5 trillion in student loans and $800 billion in credit card debt, the annual interest expenses would be roughly $92 billion and $121 billion, respectively.

Of course, not everyone pays interest on credit card debt because some people pay off their balance every month. The Federal Reserve says just 45% of those who hold a credit card pay it off every month. So let’s assume the interest expense for the two types of debt is fairly similar depending on how interest rates look across the student loan spectrum.

According to the Brookings Institute, just 6% of borrowers owe more than $100k and this 6% accounts for one-third of all outstanding student loans: 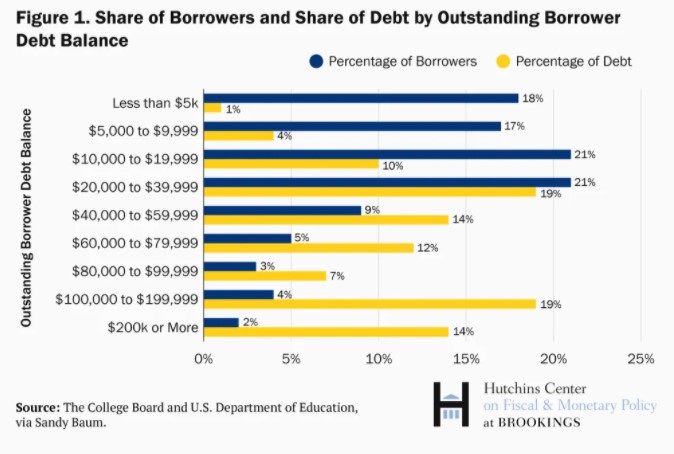 The average credit card balance, on the other hand, is estimated to be more than $6,200 per borrower. People often carry more than one credit card but the sheer number of these cards out there is an eye-opening number:

That would be good enough for nearly 2 credit cards for every man, woman and child in America right now.

Credit card debt is fairly spread out among income levels: 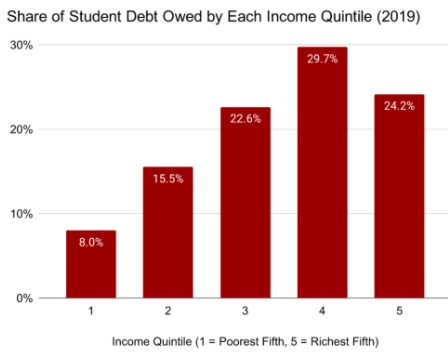 This makes sense when you consider average incomes by education level:

So at least student loan debt is an investment in something (yourself and your career). Holding credit card debt is one of the easiest paths to wealth destruction.

The other big difference is credit card debt can be expunged in bankruptcy while student loans cannot.

Regardless of what the government does with student loan debt, someone will end up angry.

Young people who are saddled with much higher debt than previous generations are already fed up while those who have paid off their loans likely wouldn’t consider it fair that they didn’t receive the same treatment.

Wiping out student loan debt doesn’t solve the bigger issue of ever-rising tuition are colleges but that’s a topic for another time.

My biggest problem with both forms of debt is this — why are the interest rates so high?

I came out of school with around $25,000 in student loan debt. But the interest rate I paid on that debt was a shade over 2%. Today rates are around 6%.

Why doesn’t the government take the rates down from the current 6% or so to the 10-year treasury rate? Or maybe closer to mortgage rates?

What’s the point of charging our young people such egregious borrowing rates when the government is administering most of these loans?

And why has every interest rate on the planet fallen since the Great Financial Crisis except for credit card rates?

Maybe a good first step for helping out those borrowers in need would be to lower their borrowing rates to make the debt burden easier to stomach.

Further Reading:
Why Are Credit Card Interest Rates So High?

1My guess is those borrowers under a certain income threshold could see some relief which makes reasonable sense to me.

The Portfolio Puzzle of Our Lifetime