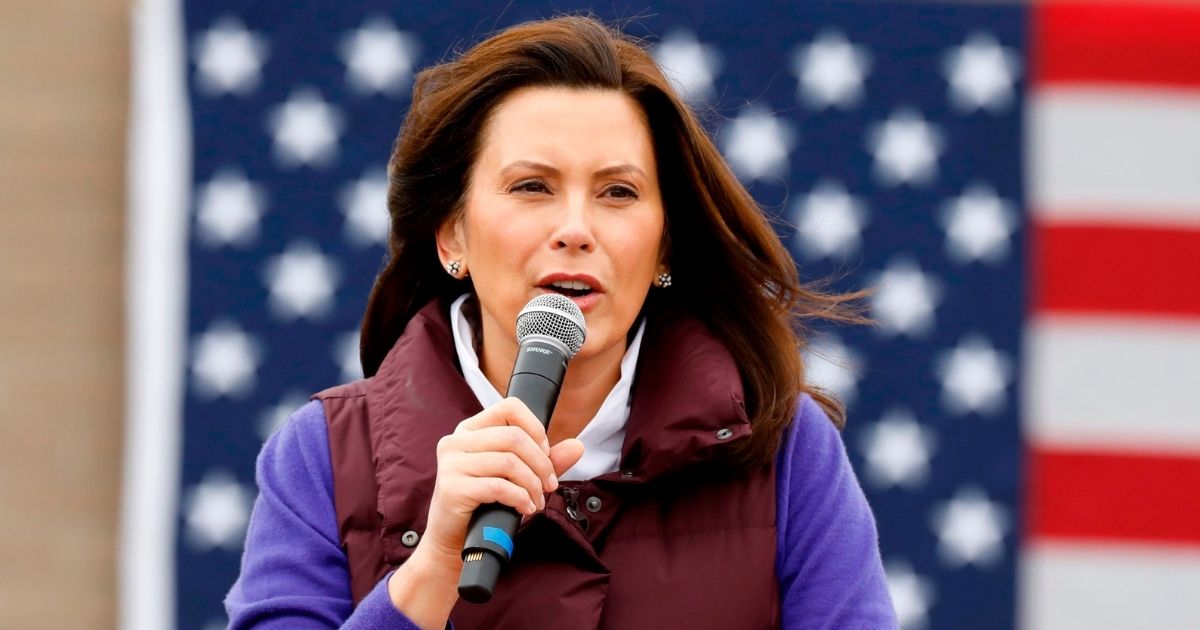 Nobody expects Michigan Democrat Gov. Gretchen Whitmer to be particularly thrilled at President Trump inviting the two top Republicans of her state legislature to the White House to talk about the certification of the presidential election results.

It all becomes a bit much, however, when she seems miffed at the lack of an invitation.

Whitmer was appearing on MSNBC’s “All In With Chris Hayes” on Thursday to talk about Michigan Senate Majority Leader Mike Shirkey and Speaker of the House Lee Chatfield, both GOPers, to 1600 Pennsylvania Ave. on Friday to discuss the president’s legal challenge to the state’s vote count.

Granted, she was speaking of the matter in the future tense and hindsight is 20/20, but the actual event ended much like you’d expect: According to Fox News, both said they saw nothing that would “change the outcome of the election,” although they’d conduct a review.

“The candidates who win the most votes win elections and Michigan’s electoral votes,” they said in a statement. “We have not yet been made aware of any information that would change the outcome of the election in Michigan and, as legislative leaders, we will follow the law and follow the normal process regarding Michigan’s electors, just as we have said throughout this election.”

Whitmer, however, thinks they needed a chaperone, telling Hayes that Chatfield and Shirkey were “summoned there by a president who lost the state and I wasn’t invited to the meeting.”

The governor made the remark in response to a question regarding two separate certification issues: A Republican on the four-member state Board of Canvassers considering voting against certifying the count and the two Wayne County Canvassing Board members who want to rescind their votes in favor of certifying the county’s tally.

Should these state lawmakers have gone to the White House without Whitmer?

Neither would likely make much difference in the official certification process.

The vote in Wayne County (home of Detroit) is official, despite the GOP members’ reservations.

And as to the state Board of Canvassers, there would still likely be three votes in favor, a court would probably force the board to certify anyway if there were a 2-2 deadlock, given that the law stipulates the board can only deny certification if they have incomplete results or information, and Gov. Whitmer can replace any member of the board at any time for any reason, according to CNN.

The mere fact some Republicans might not add their imprimatur to vote certification — no matter how fruitless the gesture may be — stuck in Whitmer’s craw.

RELATED: Whitmer’s Michigan Takes Another Step Toward Authoritarian State After What Diners Must Give Up Now

“I think it’s really dangerous, to be honest, the fact that our two highest-ranking Republicans in the legislature are going to the White House,” she said.

“They’re being summoned there by a president who lost the state, and I wasn’t invited to the meeting. I have not been briefed on what they’re going to cover, but we’re all assuming he will try to implore them the way he did these county canvassers to do whatever he can to not certify the will of the people of Michigan. I think it’s incredibly dangerous they’re even entertaining the conversation.”

Her appearance is below:

She furthermore went on to tie the very act of talking about irregularities in Wayne County — home to Detroit — as indicative of (sigh) racism.

“We all know what the law is in Michigan. This is an embarrassment to the state, and it’s an effort to disenfranchise the most populous county in our state, which by the way, is the county that is home to the most largest African-American part of our population,” Whitmer said.

“This has so many ramifications, many legal, many ethical. I would advise anyone to tread very carefully because there could be much longer-term problems for anyone who participates in an effort to undermine the election by a candidate who was on that ballot.”

There was no enumeration of what these legal “ramifications” were. Don’t expect one in the coming days, either.

While Trump’s campaign has alleged voter fraud and irregularities in a number of states — including Michigan — his attorneys have yet to come forward with concrete proof of deliberate tampering.

The Trump campaign has dropped its legal challenges against the state’s vote after several court losses, leaving it with two options in the state: delaying or denying certification of the vote, or pinning their hopes on an audit of the vote.

Whatever the case, Trump is behind by over 150,000 votes in Michigan — a sizable number for any recount or audit to eliminate, particularly if there are no legal challenges. With all that said, however, it’s curious the celerity with which the Democrats insist this process happen.

In the run-up to the election, we were being told that we might have to wait weeks for a winner to be declared. There might be legal challenges, vote-counting issues, disputed states. Hypotheticals were floated where the speaker of the House or the president pro tempore of the Senate might have to temporarily take up residence in the Oval Office. Hillary Clinton said that if it was close, “Joe Biden should not concede under any circumstances because I think this is going to drag out.”

Then the media predicted Biden was the victor. All right, the whole thing is over. Pack it up. Move, move, move toward the exit, you Trumpsters. Concede! Reconciliation. Healing. Unity. Hurry, hurry, hurry. What are you waiting for? You’re eroding democracy.

Whitmer seems genuinely annoyed that Shirkey and Chatfield didn’t get permission slips for their trip to the White House — but again, picture a mirrored counterfactual where Donald Trump was the declared winner and Joe Biden wished to challenge the state’s vote.

No matter how large the gap, is there any doubt he’d be meeting with Whitmer about certification? Do you think Shirkey, Chatfield, or any other self-identified Republican (save, perhaps, a member of the Lincoln Project) would be in the room for that conversation?

The question answers itself, which is why Whitmer is undermining — not making — her case by appearing on MSNBC in a state of minor-key pique and panic. These visits are unusual, but so is the 2020 election.

One isn’t surprised to see the governor making these arguments, of course. But no one should be obliged to take her seriously, either.