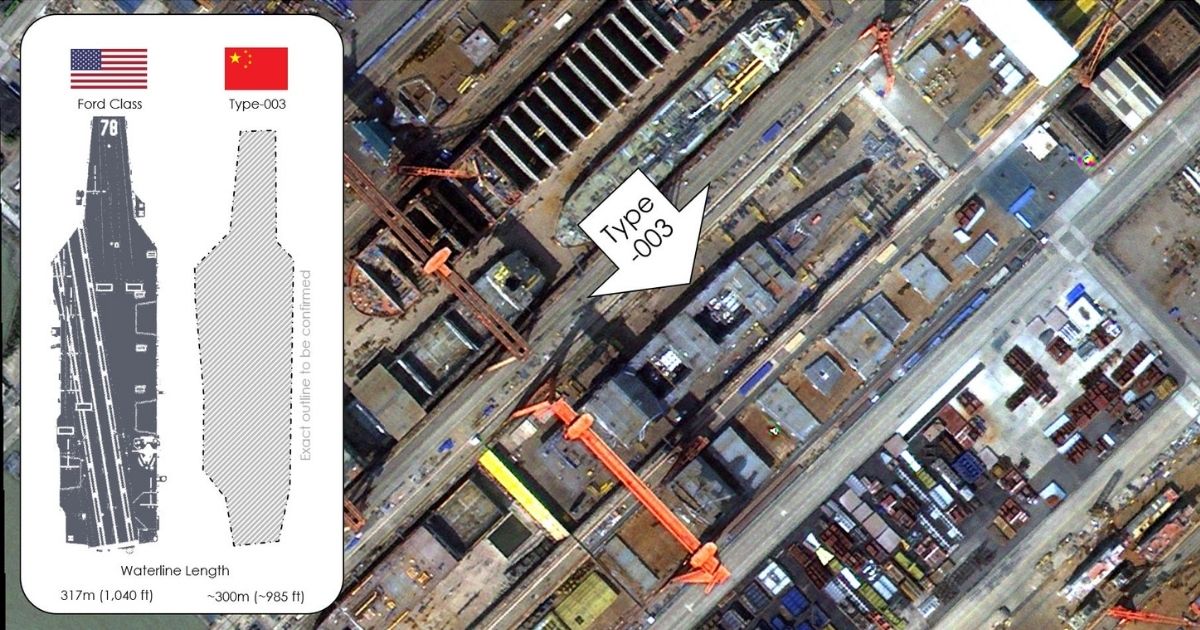 Satellite images released this week revealed the progress that China has made toward completing its latest and most technologically advanced aircraft carrier, the Type-003.

The images, taken from over Shanghai, reveal a new aircraft carrier that is only about 55 feet shorter than the U.S. Navy’s Ford-class carriers, according to Naval News.

The carrier likely will be capable of deploying heavier jets than its U.S. counterpart due to improved launching and recovering configurations including electromagnetic launch catapults, the report said.

Defense policy analyst Peter Martin tweeted a photo of the construction Friday with a comment that the new carrier was “significantly larger than the current two in service with the Chinese Navy.”

The Type-003 is, in overall terms, similar in size the the U.S. Navy’s super carriershttps://t.co/b081PijkvJ pic.twitter.com/iCFIsczS4s

The news is the latest development in China’s radical modernization program, and it comes at a time of increased tension with the U.S. and its allies.

China has repeatedly broken records for the largest incursions into Taiwanese airspace this year and even simulated a full-scale invasion of Taiwan earlier this month.

During one such incursion, China simulated a strike on a U.S. aircraft carrier, according to Newsweek.

Experts have warned of the potential for catastrophic violence between the two superpowers should China seek to annex Taiwan against its wishes, and the U.S. has since ordered the construction of new bases along the island chain leading from Guam to Australia to prepare for armed conflict with China, according to Insider.

For its part, China has vowed to conquer Taiwan, which it has claimed as its own territory since 1949, when the Chinese Communist Party pushed the Chinese Nationalist Party off the mainland and onto the island during the Chinese Civil War.

Taiwan President Tsai Ing-Wen vowed to increase her country’s collaboration with the U.S. and its partners in the face of such threats, tweeting that the nations would continue to work together to “advance maritime safety.”

“We in #Taiwan will continue to work with the #US & other countries in the region to advance maritime safety together with humanitarian & conservation initiatives,” she said March 26.

Pleased to see Rep @bikhim sign an agreement on coast guard cooperation with the US. We in #Taiwan will continue to work with the #US & other countries in the region to advance maritime safety together with humanitarian & conservation initiatives. https://t.co/jlw5fqGrKw pic.twitter.com/RodLyxGUR3

Amid all this escalation, images of the nearly completed Type-003 are less than welcome news in the West.

To be sure, the Chinese carrier will not be capable of going toe-to-toe with its U.S. Navy counterparts and emerging victorious, but it doesn’t have to.

That the Type-003 lacks the nuclear drive or sheer scale of the Ford-class carriers does not matter much, given China’s already dominant position in the South China Sea. Indeed, even without factoring for the arrival of the Type-003, classified U.S. wargames suggest that a Pacific conflict over Taiwan would end in a U.S. loss, Yahoo News reported last month.

Coupled with new hypersonic ship-killer missiles, improved stealth fighter jets and an aggressive coastal defense policy, it is clear that China is hardening its own defenses to a point where America will have trouble projecting power in the surrounding waters, much less carrying out military operations during an active conflict.

China is rapidly arming itself with immensely powerful tools that can counter some of the most destructive weapons in the U.S. arsenal. Unless President Joe Biden implements active economic and military deterrence initiatives soon, America is sure to lose the dwindling competitive edge it has left.