Home Daily News We Need More ‘We Are the World,’ Less Critical Race Theory and... 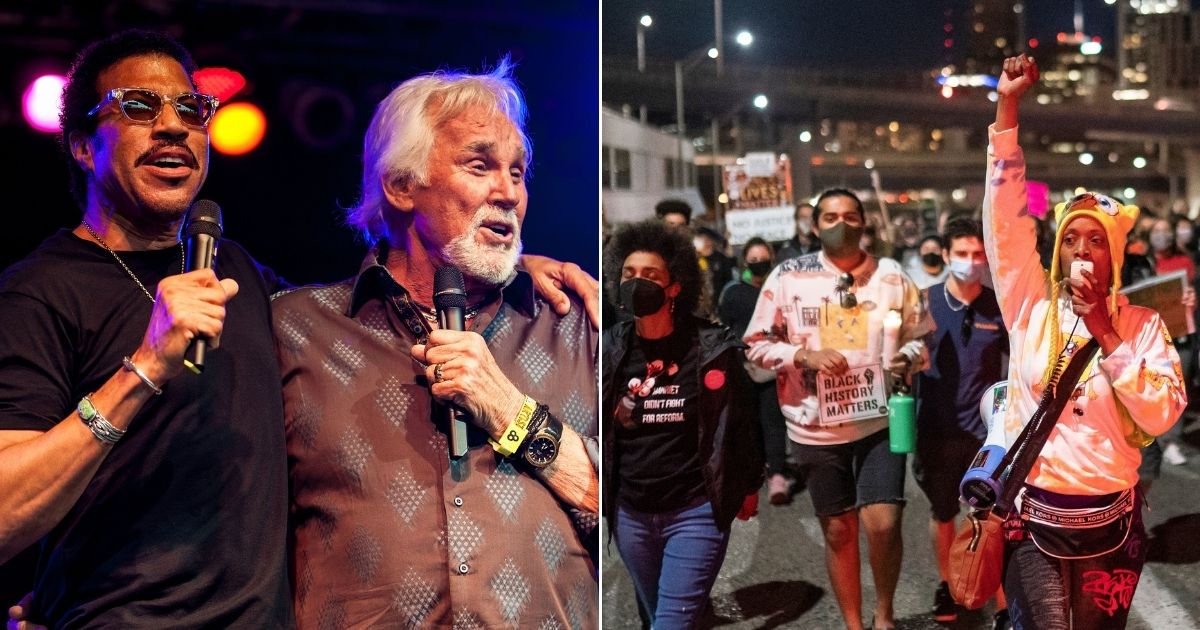 Thirty-six years ago this week the single “We Are the World” reached the top of the Billboard’s pop music chart, where it would reign supreme for four weeks.

It was the fastest-selling pop single in history, with over eight million copies sold in the U.S. and perhaps an additional 20 million sold worldwide, according to Rolling Stone.

The central point of the song was our common humanity in contrast to critical race theory and Black Lives Matter’s message that what defines us most is our race.

USA for Africa, the nonprofit organization behind the effort, raised more than $75 million for famine relief thanks to the song and the accompanying album and other merch such as sweatshirts and T-shirts.

The 46 artists who participated in “We Are The World” included a cross-section of American music talent from the ’80s and before, including Lionel Richie and Michael Jackson (who co-wrote the song), Huey Lewis, Cindy Lauper, Bob Dylan, Steve Perry, Kenny Rogers, Willie Nelson, Bruce Springsteen, Billy Joel, Diana Ross, Tina Turner, James Ingram, Ray Charles and Stevie Wonder, to name a few.

One of the nicest and most meaningful things looking back at it through today’s eyes is the black and white performers coming together to help the people of Africa.

The visual message it sent alone was one of racial harmony, not to mention the lyrics, which proclaimed, “We’re all a part of God’s great big family.”

One of the most powerful parts of the song is Springsteen and Wonder juxtaposed belting out: “We are the world, we are the children, we are the ones who make a brighter day, so let’s start giving.”

Dr. Martin Luther King Jr., in his famous “I Have a Dream” speech, saw us as all part of God’s family too.

Just this past weekend, my pastor, Michael Maiden of Church for the Nations in Phoenix, observed in his sermon, “We treat people differently when we view them as the children of God.”

It seemed this way of thinking was more prevalent when I was growing up in the 1970s and ’80s.

RELATED: BLM Protesters Kneel, Rally for Man Killed by Police, Then It Turns Out He's White

Certainly, the message came through church camp when I had my first real chance to interact with African-Americans and people of other races.

Television shows like “The Jeffersons,” “Good Times,” “The Cosby Show” and even “Sesame Street” dealt with issues of race in a positive way.

I was a high school senior when “We Are the World” came out. Like many, I loved it.

Though in a more salty way (at times), comedian Eddie Murphy deftly poked fun at racism, taking jabs at both black and white people through his stand-up acts, on “Saturday Night Live” and through his movies like “Beverly Hills Cop.”

“Racism ain’t as bad as it used to be anyway,” Murphy contended.

“I went to Texas, though, looking for racism,” he told the audience.

When he got off his plane and a white man asked him, “Is this your bag?” trying to help, Murphy said he responded, “Yeah, it’s my f***ing bag!

“Why motherf***er? A black man can’t have a suitcase?”

How much, if any, of the account is true doesn’t really matter. The point Murphy made, in a hilarious way, is that sometimes we read or inject race into situations where it just isn’t.

In 2019, in a revival of his 1980s SNL character Mr. Robinson (a black, inner-city knockoff of Mr. Rogers), Murphy made fun of just how fearful white people can be of being accused of racism.

A white couple in his building knocks on Mr. Robinson’s door to ask if he’s seen a new flat-screen TV they ordered, which was delivered to the lobby.

Murphy turns to the camera and says, “Don’t worry boys and girls, Mr. Robinson knows just what to say in situations like this.”

“Oh, you think I stole your TV because I’m black!” he yells in the couple’s faces.

They immediately cower, responding apologetically, “No, no … Oh God, no.”

Murphy looks back at the camera, “It always works, boys and girls.”

The couple backs away from the doorway.

Murphy slams the door and returns to his living room saying to the camera, “Can you believe the nerve of them, boys and girls? There’s a special word for that.”

He grabs a remote and turns on the new, stolen flat screen, which displays the word “racism.”

Messages that question or make light of the current critical race theory/Black Lives Matter narrative that America is systemically racist are few and far between.

Most of the culture’s most powerful influencers are fully on board the CRT/BLM bandwagon, including Hollywood, academia, the arts, corporate America, much of the federal government and even professional sports.

One welcomed break from the orthodoxy came from former NBA star and sports commentator Charles Barkley, who recently offered some “We Are the World”-like sentiments.

“Man, I think most white people and black people are great people,” he said. “I really believe that in my heart.”

“But I think our system is set up for our politicians, whether they’re Republicans or Democrats, are designed to make us not like each so they can keep their grasp of money and power. They divide and conquer,” Barkley continued.

America is a wonderful country offering opportunity and freedom to people of all races to pursue their dreams.

We just need to be reminded from time to time: “We are all a part of God’s great big family.”