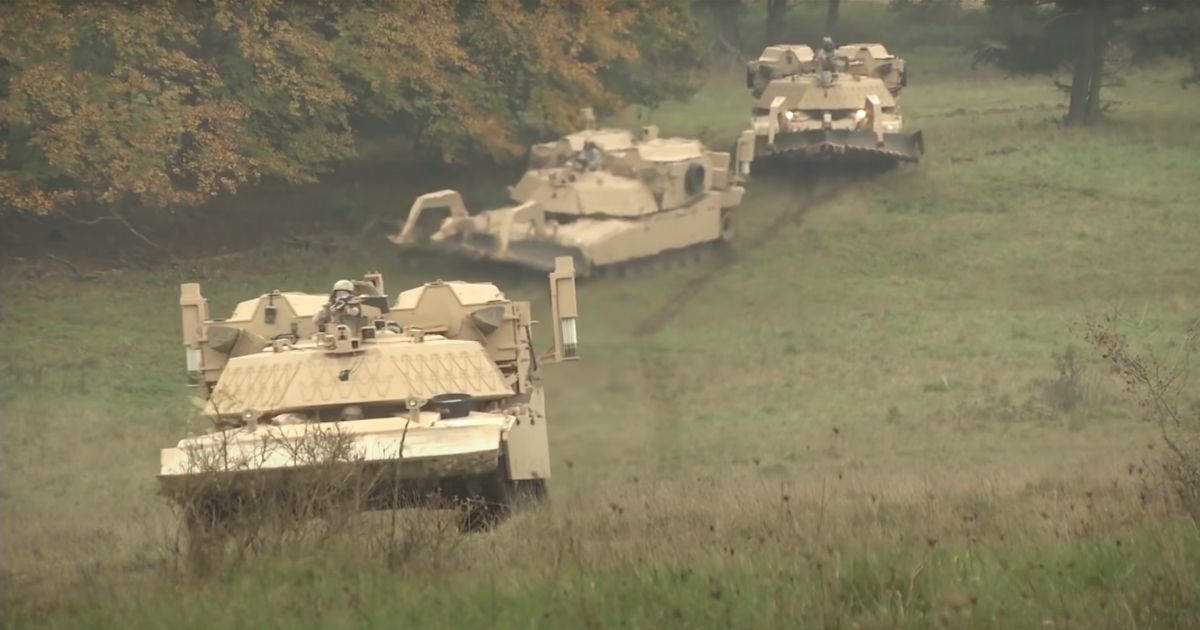 Imagine you’re commanding a military ground force tasked with breaching a heavily defended enemy position. Behind fortified barriers bristling with gun barrels, crew-served weapons are waiting to pick off any of your infantry. Mines silently await the chance to flip any approaching vehicle and allow enemy mortars to orient and rain hellfire on the trapped crew.

It’s any attacking forces’ nightmare, and even victory seemingly would come at a high cost.

If you have a few of the United States Army’s Assault Breacher Vehicles at your disposal, however, overrunning even enemy lines as fortified as these would be a cakewalk.

Built on the chassis of the legendary American M1A1 Abrams battle tank, the ABVs are speedy, durable and hard to kill.

Although the ABV isn’t armed with a cannon, this behemoth has plenty of tools useful in combat.

According to the Army, the armor can be outfitted with a Combat Dozer Blade, line charges and high-tech communications equipment. A mine plow attachment allows the brute to toss explosives to the side, where they detonate with minimal harm to the ABV.

Watch the video below, taken during the Combined Resolve III training exercises, to see some of what these powerful war machines can do.

Gliding effortlessly through the ground and any emplaced positions, the real fun begins once the ABV has created a complete breach of an enemy line.

Should the military fund game-changing equipment such as this?

At the end of the video above, the column of tanks advancing in the ABV’s path proves that enemies should not just be afraid of the combat engineer vehicle, but be downright terrified of what follows it.

A similar tactic was used with brutal efficiency in the early days of World War II, when the German military would blitz enemy defenses with a powerful and speedy armor attack before moving an endless stream of troops through the gap to encircle and destroy its foes.

For any enemy who thinks a fortified island (say, for example, any hostile forces occupying Taiwan) will keep them safe from the Army’s armor, they might be correct.

But an island is no guarantee of safety from the United States Marine Corps, which has its own ABVs and proved in 2017 that these beasts can even spearhead an amphibious assault.

When facing an unconventional enemy, such as insurgents and terrorists, the line charges carried by the ABV can detonate improvised explosive devices and explosives on the surface with ease. It’s no wonder why our military loves the ABV — it has the ability to do the seemingly impossible things that no other piece of equipment can do.

More than 2,000 years ago, when the Carthaginian general Hannibal Barca was told he could never take elephants over the Alps to wage war against Rome, the infamous military commander supposedly had only one response.

“I shall either find a way,” the great general proclaimed, “or make one.”

In present times, the general’s steely determination to breach the unbreachable has been adopted with deadly resolve by the United States military.