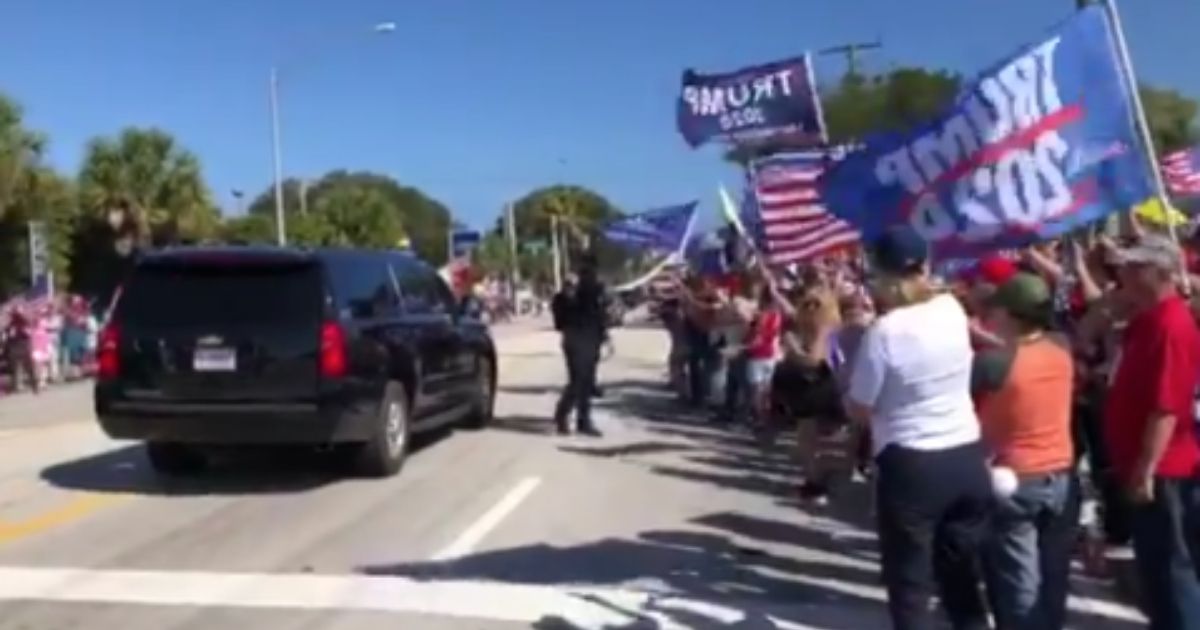 For those who think it’s time to write off former President Donald Trump as a political has-been, the crowd on hand in southern Florida to greet his motorcade on Presidents Day should disabuse them of that notion.

“The rally was reportedly organized to mark Presidents Day and to celebrate Trump’s acquittal Saturday in his Senate impeachment trial,” the news outlet added.

Trump’s former deputy chief of staff, Dan Scavino, posted video on Twitter of the moment, relating that Trump was returning from a golf outing.

This is unbelievable! 45 returns to Mar-a-Lago this afternoon, after an awesome day out on the links….to this….❤️🤍💙🇺🇸🦅 pic.twitter.com/QJwR3hAgMs

In another video posted by WPEC-TV, the 45th president can be seen waving to the crowd as the MC Hammer song “U Can’t Touch This” plays in the background and the crowd chants “USA, USA, USA!”

“That’s my president!” a woman can be heard yelling.

Donald Trump waives to crowd of supporters from inside an SUV in West Palm Beach: https://t.co/Enw4LJTBVc pic.twitter.com/WVN7KTs21s

Do you think Trump would win a second term?

The Senate acquitted Trump on Saturday in his second impeachment trial in roughly a year by a vote of 57 to 43, giving him a 10-senator margin to spare.

Some of Trump’s supporters proclaimed afterward that he enjoyed the distinction, thanks to congressional Democrats, of being the “most acquitted president ever.”

“Our historic, patriotic and beautiful movement to Make America Great Again has only just begun,” he said.

“In the months ahead I have much to share with you, and I look forward to continuing our incredible journey together to achieve American greatness for all of our people. There has never been anything like it!” Trump added.

“We have so much work ahead of us, and soon we will emerge with a vision for a bright, radiant, and limitless American future,” the former president said.

“Our historic, patriotic and beautiful movement to Make America Great Again has only just begun. In the months ahead I have much to share with you…” pic.twitter.com/uDFydj7Xy0

It looks like the MAGA movement is alive and well.

Grover Cleveland has been the only past president to serve non-consecutive terms. It will be interesting to see if Trump can become not only the 45th, but the 47th president.