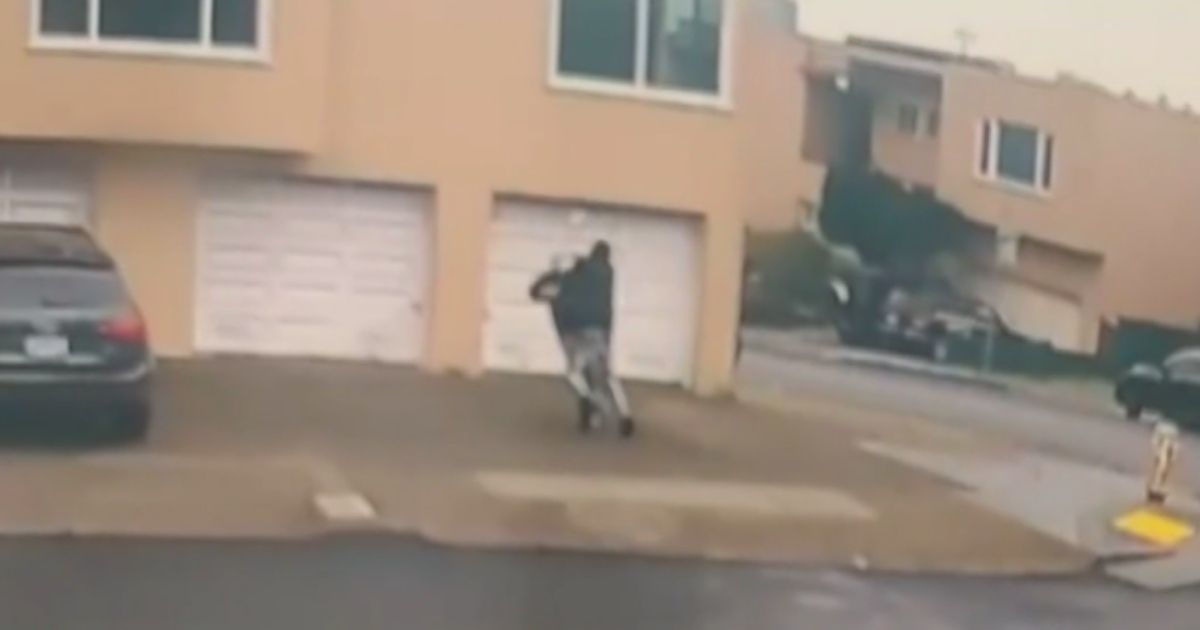 Eighty-four-year-old Vicha Ratanapakdee was walking in a residential neighborhood of San Francisco when, apparently without provocation, a man sprinted across the street and catapulted the elderly man to the ground.

The assailant then fled on foot with a female companion, KGO-TV reported.

Police officers discovered Ratanapakdee lying on the sidewalk. He was transported to a hospital, but ultimately succumbed to his injuries.

A neighbor’s security camera captured the deadly attack, which occurred at 8:30 a.m. in broad daylight, according to KTVU-TV.

WARNING: The following video contains graphic violence that some viewers may find disturbing.

HORRIFYING: 84-year old man was assaulted at Anzavista & Fortuna Thurs & passed away yesterday. Nearby homeowner says she is scared to death.

Two suspects — 19-year-old Antoine Watson and 20-year-old Maylasia Goo — were eventually arrested by San Francisco police in connection with the attack. Watson has pleaded not guilty to murder and elder abuse causing death, KPIX-TV reported, while Goo is facing a charge of accessory after the fact. The motive for the attack remains unknown.

The attack happened on the same day that another senior, 76-year-old private investigator Jack Palladino, was mugged in broad daylight by two men who were attempting to steal his camera in the city’s Haight-Ashbury neighborhood, according to NPR. Palladino, who struck his head on the pavement after being knocked to the ground by the men, also died from injuries he sustained in the unsuccessful robbery.

While overall crime rates have trended downward nationally and even specifically in San Francisco during the pandemic as a result of people staying home, certain crimes have become much more common. For instance, burglaries were up 46.5 percent last month when compared to January 2020, while motor vehicle thefts were up 20.4 percent and arsons were up 73.7 percent, according to the San Francisco Police Department.

As the rates of some crimes increase, it’s worth remembering that the city’s soft-on-crime policies only embolden violent criminals — like the ones who killed Ratanapakdee and Palladino.

The city’s radical district attorney, Chesa Boudin — the son of Weather Underground terrorists who were convicted of and imprisoned for murder after three people, including two police officers, died in an attempted armored car robbery — has eliminated cash bail for even the most violent criminal offenders and refuses to prosecute quality-of-life offenses such as prostitution, drug use, public camping and public urination, Fox News reported.

According to an August statement from Frank Noto, president of Stop Crime SF, a San Francisco victims’ rights group, “[m]uch of the blame for rising crime falls on San Francisco District Attorney Chesa Boudin, as his office fails to prosecute many criminals, including drug dealers who poison the Tenderloin and other neighborhoods with heroin and fentanyl.”

Indeed, instead of prosecuting drug offenses, city officials want to create “injection sites” where drug addicts can openly shoot up without fear of arrest and prosecution.

Such lawless policies are bad enough, but the city officials’ open hostility toward law enforcement has made matters much worse.

At a party celebrating the election of Boudin as the city’s top prosecutor, city Supervisor Sandra Lee Fewer led the crowd in a chant of “F— the POA!” — a vulgar attack on the city’s police union, the San Francisco Police Officers Association, according to the San Francisco Chronicle.

And, in the wake of the death of George Floyd, the San Francisco Municipal Transportation Authority tweeted that it would “no longer transport SFPD to anti-police brutality protests.”

And 3. The SFMTA will no longer transport SFPD to anti-police brutality protests.

Further, although a city-commissioned study performed in 2019 concluded that SFPD’s patrol staffing was “severely inadequate,” San Francisco’s Democratic mayor, London Breed, announced in July that she would be slashing the budget of the San Francisco police and sheriff’s departments by $120 million. That same month, the San Francisco Board of Supervisors voted unanimously to place a measure on the ballot to do away with a minimum SFP staffing requirement, according to Vox. That measure was overwhelmingly approved by the voters in November, the Chronicle reported.

The pro-criminal and anti-cop atmosphere in San Francisco has led police officers to resign from the SFPD in droves, placing further strain on the department and making the city less safe.

We may not know what motivated the brazen assault on Vicha Ratanapakdee, but one thing is clear: The policies being championed by the left in San Francisco encourage such lawless behavior.

The horror of this attack and others like it should be a wake-up call. This could soon be coming to a neighborhood near you.