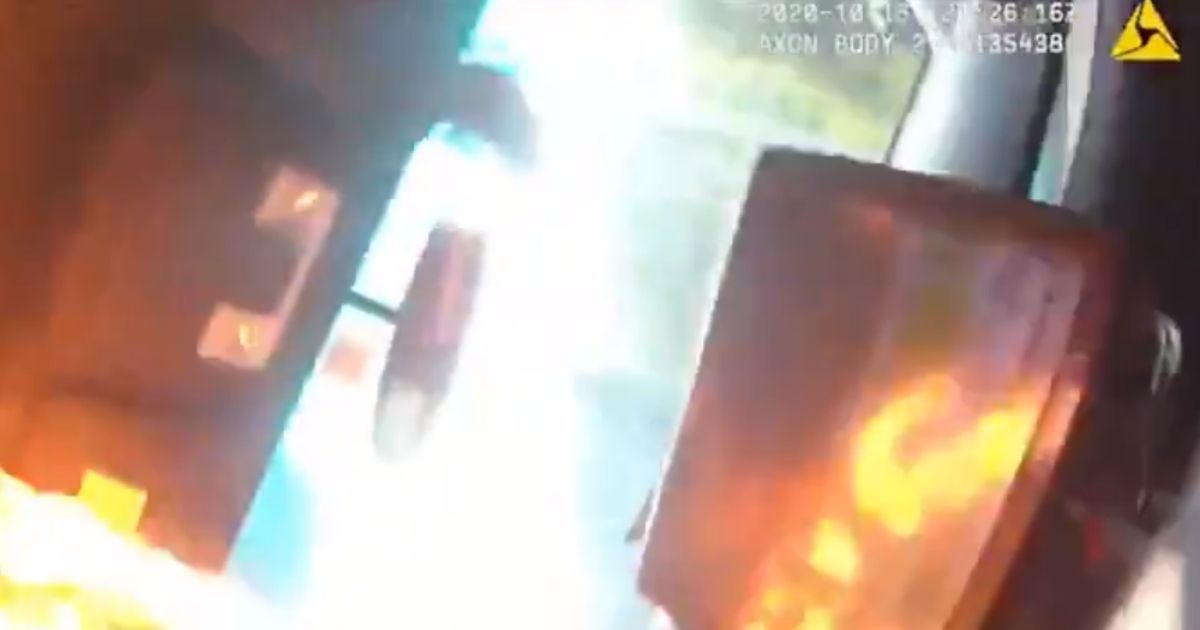 A Seattle police officer is recovering from minor burns after a man threw a blazing piece of wood into a police cruiser Thursday.

Multiple videos of the incident show a man walking down an alleyway with a large burning wooden stick in the city’s South Lake Union neighborhood.

Videos from the responding police officer’s dash and body cameras were released by the Seattle Police Department, as well as another clip which was apparently taken from a nearby surveillance camera.

WARNING: The following videos contain vulgar language and violent images which some viewers might find disturbing:

JUST-RELEASED video shows man in South Lake Union torch a Seattle Police cruiser with an officer inside. Officer is recovering from burns on his hands and a leg injury. (warning: graphic language) pic.twitter.com/tU4lx1FKSS

In the videos released by police, the man with the burning wood was walking when he was ordered by the responding officer to “stop.”

The officer also reported the subject’s activities on his radio.

Do you think cities that move to defund their own police departments should be denied federal funding?

The Seattle officer approached the subject from his police SUV and identified himself as a police officer. But rather than obey the officer’s commands, the man screamed an expletive at him.

The situation then escalated quickly.

The officer pursued the subject from the SUV, and the man turned, approached the vehicle and threw the flaming piece of wood into the police cruiser through the driver’s side window.

The officer fired at least a half-dozen shots as he reversed the vehicle, but the attacker was apparently uninjured while succeeding in setting the car ablaze.

KCPQ-TV shared an image of the burned-out car, which appeared to be a total loss due to the fire damage.

Authorities took one person into custody after a Seattle Police car was set on fire with an officer inside.https://t.co/ogJSpmedei pic.twitter.com/AZwfVNa4Ui

KIRO reported the man alleged to have thrown the burning wood was later arrested at a nearby parking garage.

Police confirmed on Twitter that a person was arrested:

Seattle PD has one in custody in the area of Dexter Av and John St after suspect set fire to a police vehicle while officers were inside. PIO is on scene.

The car reportedly caught on fire as the suspect was being taken into custody.

“All of a sudden the car blows, catches on fire. We’re like ‘oh snap.’ And then flames just started getting bigger and bigger,” a witness said.

The officer was treated for what KIRO reported to be non-life-threatening burns.

“It was an incredibly dangerous situation for our officer. He did suffer some minor injuries, some minor burn wounds,” Seattle Police Department Assistant Chief Deanna Nollette said.

Mayor Jenny Durkan has helped lead the charge to cut significant funding for police in the city, despite a summer crime wave and a month-long insurgency in one neighborhood by leftist activists who also took over a police precinct.

The department has yet to replace the 28-year veteran with a new permanent police chief.