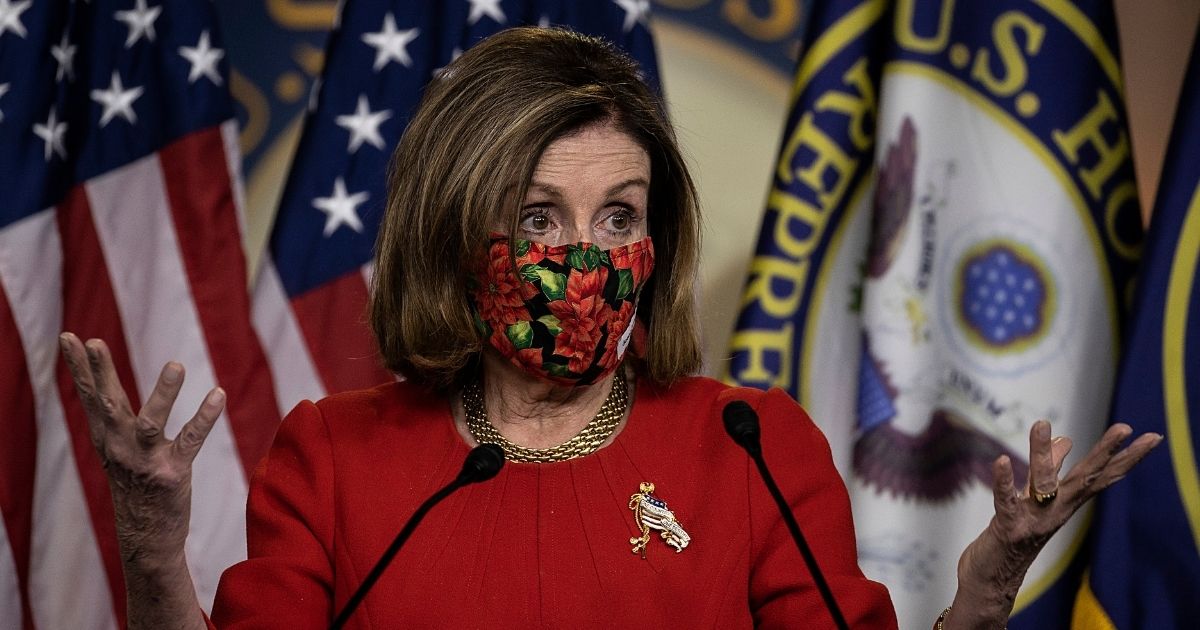 House Speaker Nancy Pelosi said many outlandish, provocative and outright false things on the House floor Monday —  but one comment in particular takes the cake.

“And I say, well, you can do both. Science is an answer to our prayers,” Pelosi said. “And our prayers have been answered with a vaccine.”

She spun this tale while telling other whoppers about why Democrats had no choice but to hold up a second coronavirus aid package that was expected to pass later Monday.

Pelosi said they wouldn’t accept a follow-up to the Coronavirus Aid, Relief, and Economic Security Act passed in March because they had to start by first “crushing the virus.” The speaker went on to blame President Donald Trump and Republicans for the Democrats’ own lollygagging and obstructing.

Pelosi and her Democratic cohorts used every excuse imaginable to hold up relief (no doubt waiting until after the 2020 presidential election) while Americans needed help restoring some of what the government robbed from them with draconian COVID-19 shutdowns and restrictions that have dragged on since March.

“We couldn’t pass legislation until now because the administration simply did not believe in testing, tracing, treatment, wearing masks, sanitation, separation and the rest — scientific approach,” Pelosi said, calling the very real concept of herd immunity “quackery” before launching into the lie about religious people.

Pelosi spoke as if it was presumptive president-elect Joe Biden and his belief in science — as if it is a dogmatic idea rather than an academic discipline — that spurred drug makers into developing a vaccine in record time, ignoring the fact that President Donald Trump was the one who got it done.

She accused Republicans of not doing enough for essential workers, the poor and of course people of color, but none of that was as painfully false as her implication that the faithful in Washington, D.C., freely admitted to her that they reject science.

This narrative she tried to create — that science and religion are diametrically opposed —  seldom comes from religious people and is instead a charge usually leveled against the faithful from smug, sneering atheists who know little about science and even less about religion.

Furthermore, the myth that the left is all about science is shattered by the reality that it’s Democrats like Pelosi and Biden who are all-in on radical gender theory, espousing the most unscientific, faith-based, emotional claptrap policies of our time.

These people believe that someone can magically change their gender by mutilation or simply by fiat based on how they “feel,” and they support unscientifically vetted practices like giving puberty blockers to children because who insist they are something other than the reality their biology clearly demonstrates as a reality.

Pelosi used her fairy-tale example of schooling the ignorant that science and religion are not mutually exclusive to make a false point, and its particularly disgusting when done using the backdrop of her phony Catholicism.

She likes to trot out her religion only when can use it to make some point, much in the same way apostate baby boomer Catholics who haven’t darkened the door of a church in decades try to speak on matters of faith with authority because they were altar boys once way back when.

The Daily Wire’s Matt Walsh, himself a devout Catholic, called Pelosi out on her phony story, tweeting Monday, “Fact check: nobody has ever said that.”

Fact check: nobody has ever said that https://t.co/g69hkfxguz

Nobody would ever say that, except someone like Pelosi who doesn’t seem to understand what actual people of faith believe because she’s never bothered to try to dispel the myths and straw men she’s created in her own mind.

Pelosi and her party held up another relief bill for months, balked at the idea that a vaccine would be created and administered so quickly and did everything they could do derail Trump’s presidency and his ability to lead while now trying to take credit for vaccine and the promise it brings.

Conservatives, including religious people, are happy for the vaccine and hopeful for what it can bring, even if they were rightly skeptical of the mixed messages coming from government and political opportunism the left employed during the COVID-19 pandemic.

It’s not that religious people don’t believe in science; it’s just that they don’t trust a word Pelosi has to say — and her whole diatribe is exactly the reason why.