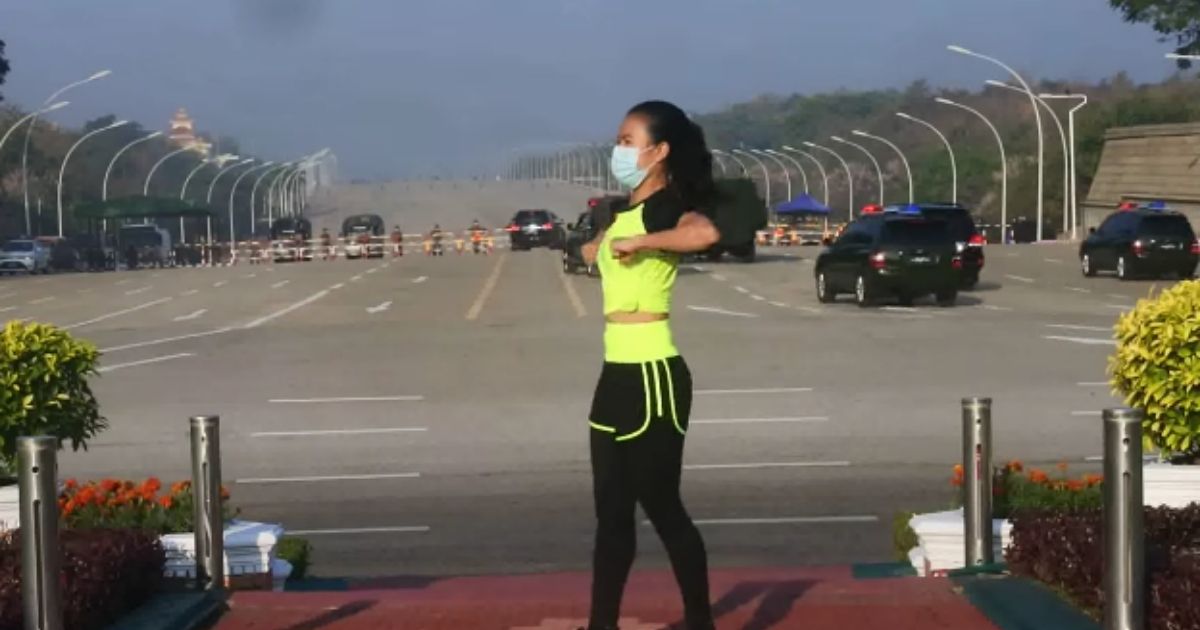 The beginning of February can only be described as a chaotic time for the country of Myanmar, formerly known as Burma.

Despite the ensuing chaotic upheaval a few hundred yards behind her, a video that has now gone viral on social media shows a young woman doing her regular aerobics routine as a convoy of military vehicles speeds toward a heavily guarded barricade, the Los Angeles Times reported.

A woman did her regular aerobics class out in open without realizing that a coup was taking place in #Myanmar. A Military convoy reaching the parliament can be seen behind the woman as she performs aerobics. Incredible! pic.twitter.com/gRnQkMshDe

Although there were originally some questions over whether the video was real or not, Aditya Raj Kaul, a contributing editor at India’s CNN-News18, confirmed the video’s validity.

He pointed out that physical education teacher Khing Hnin Wai, the woman in the video, posted more videos on Facebook, explaining she uses the spot for her aerobics practice regularly.

According to Chris Pandolfo at TheBlaze, the country of Myanmar, located in Southeast Asia, was on the slow but steady path to democracy over the past decade, as the elected National League for Democracy served as the ruling party, winning 396 of the possible 476 parliamentary seats in November.

Following the November elections, the newly elected parliament was supposed to come into session this past week. But this quickly changed when Myanmar’s military suddenly detained State Counsellor Aung San Suu Kyi and announced the military would control the country for one year.

According to The Associated Press, state police have charged Suu Kyi with possessing illegally smuggled walkie-talkies amid concerns that her party did not properly investigate potential voter fraud in the latest elections.

Should the U.S. further intervene in Myanmar’s political affairs?

On Tuesday, Politico reported that President Joe Biden’s administration had condemned the military overthrow, saying it was a “coup.” This designation means the U.S. will end any financial aid provided to the country going forward.

Myanmar’s military has a history of human rights abuses, and this is just further evidence of its tyranny.

As individuals striving to improve the world around us, we must hold our leaders accountable for their actions. Part of that accountability stems from forming an uninterrupted democratic system that allows for the people to select their leaders via a free and fair election process.

Although many of us would prefer to be left to our own devices in day-to-day life, a free society necessitates some government power when it comes to organizing a nation. As members of a nation, it is our duty to be informed and responsible when electing our officials.

RELATED: They Hid This Hopeful Note for Future Generations in the Darkest Days of World War II, But Would They Weep to See Their Country Now?

There is room for healthy doses of many things in people’s lives, but there is a fine line between healthy and unhealthy. With moderation, being aware of the political news of the day can be beneficial, as can reading, exercise, or any hobby, for that matter.

At the same time, however, escaping reality to the point of having little awareness of the world around you can be incredibly harmful, especially in our modern world, where nothing is certain. History has proven time and time again just how quickly empires, democracies and even authoritarian regimes can rise and fall at a moment’s notice.

If we stand by and watch obliviously without any action, there is no safeguard to protect our rights from those who will do anything to seize them if it results in attaining additional power.

Nobody thinks it could possibly happen to them, but every day, our lives are affected by the whims of those in power.