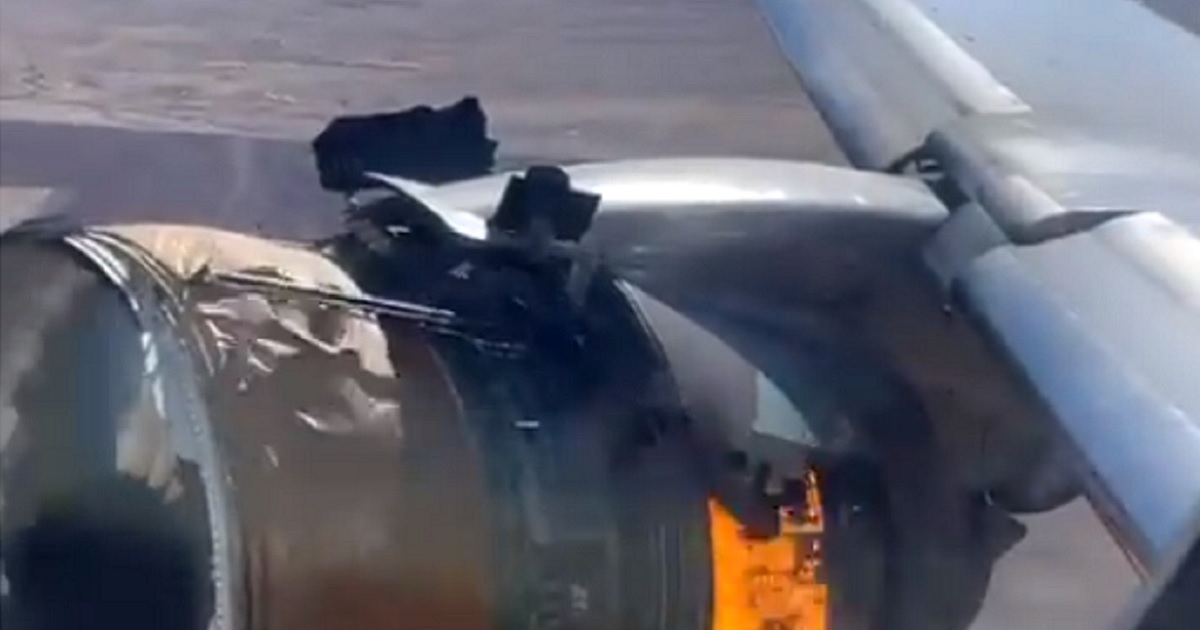 Hot metal rained down from the sky Saturday after one engine on a United Airlines Boeing 777 exploded shortly after the plane’s takeoff from Denver.

The flight from Denver International Airport to Honolulu safely landed in Denver, but debris from the engine fell on several communities to the north of the city.

The plane had 10 crew members and 231 passengers, according to Fox News.

Every passenger I’ve talked to on United 328 wanted to thank the pilots and crew who safely landed the plane. Without them today could’ve looked a lot different.

Passengers on United 328 describe a harrowing experience as they looked out windows and saw an engine on fire.

“My daughter was sitting on the window. I was like, don’t look. Let’s close it up. Let’s just pray. So that’s what we did. We held hands and said some prayers” #9News pic.twitter.com/FfNj41SdfS

Preparing for the worst, he said he and his wife took their wallets with their driver’s licenses and put them in their pockets so that “in case we did go down, we could be ID’d.”

However, the pilot landed the plane safely, to the cheering of those aboard.

This is the moment United flight 328 landed in DIA

You can see damage to right engine.

From the ground, the spectacle appeared to be a disaster in the making.

Tyler Thal witnessed the near-disaster from the ground, according to the AP.

Is the pilot of this plane a hero?

“While I was looking at it, I saw an explosion and then the cloud of smoke and some debris falling from it. It was just like a speck in the sky, and as I’m watching that, I’m telling my family what I just saw and then we heard the explosion,” he told the AP. “The plane just kind of continued on, and we didn’t see it after that.”

I saw an explosion on this low flying aircraft over @broomfield about 45 minutes ago. Debris fell from the plane and left a black cloud of smoke. The plane continued on. Any new on if this plane landed safely? @BroomfieldPD @NMFirePIO @9NEWS @KyleClark pic.twitter.com/paMCdiuWMN

Kirby Klements said he felt lucky even though a piece of debris crushed his truck, according to the AP.

“If it had been 10 feet different, it would have landed right on top of the house,” he said. “And if anyone had been in the truck, they would have been dead.”

Longtime Broomfield residents had never seen the sights they witnessed Saturday after airplane debris landed in their lawns and damaged their properties. https://t.co/nRpUBTl45c

Pieces of insulation fell “like ash” for about 10 minutes, he said.

Much of the debris landed in Broomfield, which is about 20 miles north of downtown Denver, according to KUSA-TV.

No injuries were reported on board the aircraft or on the ground.

The National Transportation Safety Board is investigation, the AP reported.