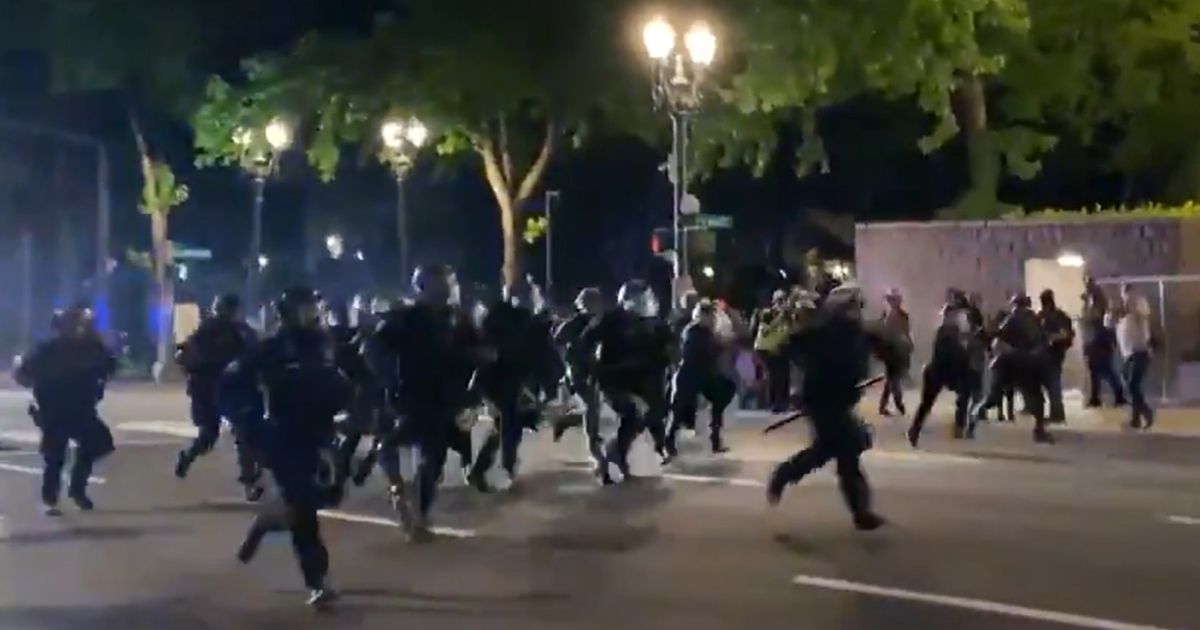 For months now, dangerous riots have torn apart cities across the country.

The violence began as a response to the May 25 death of George Floyd in Minneapolis police custody. According to the medical examiner, Floyd, who was black, had consumed a potentially lethal amount of the drug fentanyl before a white officer knelt on his neck for nearly 9 minutes.

Although the rioting and looting have ceased in most cities, Portland, Oregon, is still enduring nightly violence.

On Wednesday, however, the city’s police said enough is enough.

Sergio Olmos, a journalist for Oregon Public Broadcasting, captured video of Portland officers decked out in riot gear clearing out a mob of rioters holding shields.

Sprinting at the crowd, the group of police quickly dispatched the Portland ne’er-do-wells.

It’s nice to see the police finally freed to take control of the city’s streets.

In the next video posted by Olmos, the officers could be seen arresting dozens of suspects.

WARNING: The following video contains vulgar language that some viewers may find offensive.

Police breakup the shield line and arrest about a dozen people pic.twitter.com/nWXlTAlkGB

The quick, efficient takedown of the rioters is a welcome sight for Americans who have been fed up with the senseless violence.

That being said, in a way, the police’s quick work is troubling as well.

RELATED: Portland Mayor Abandons His Residents, Brags About It for Anti-Trump Points

If it was this easy to stop the rioting, couldn’t they have done it a long time ago, rather than waiting for the 91st consecutive night of violent demonstrations in Portland?

During the first few months of the nationwide violence, if government officials had been more pro-active, perhaps all of the senseless violence, destruction of businesses and lives lost could have been prevented.

Unfortunately, for most of that time, the majority of left-wing politicians and establishment media personalities downplayed the violence, describing the demonstrations as “mostly peaceful.”

Should police across the country end the rioting once and for all?

In a way, that description is accurate — there were likely many more peaceful protests than hate-fueled riots. In any event, those protests continually led to riots and often gave cover for the rioters.

After a few nights of that happening, protesters could have drawn a line and condemned the rioters if the violence continued.

That never happened. Police forces across the country, in most cases, never cleared out the rioters in their cities. That delay led to unnecessary suffering.

Now, at least, Portland officials are finally starting to do the right thing.