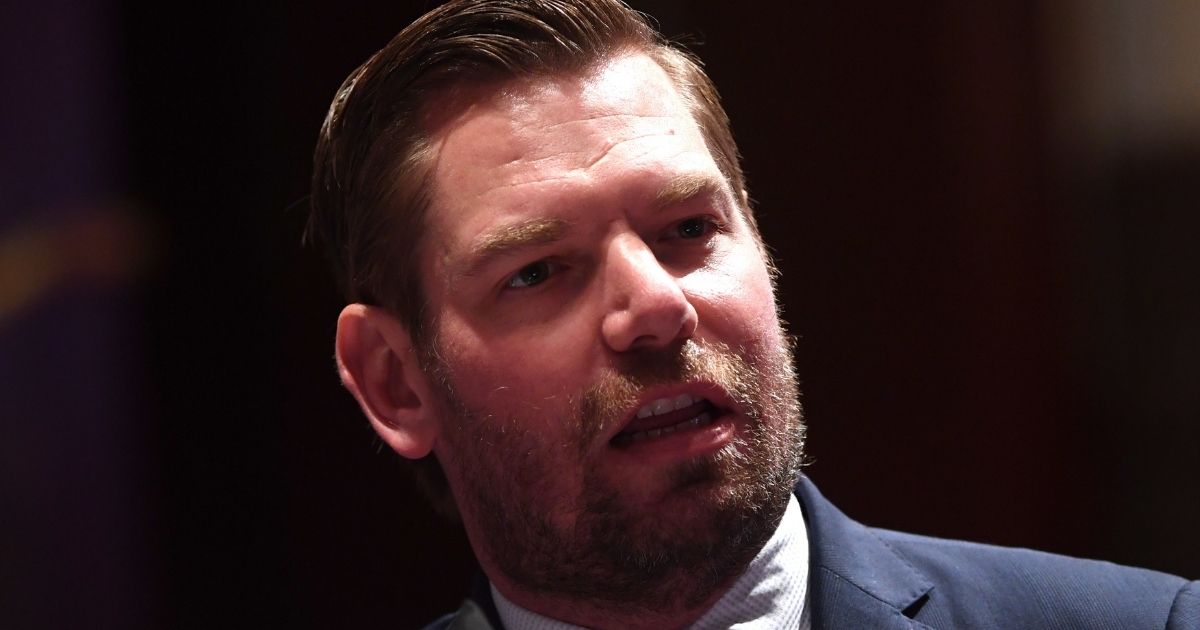 Rep. Eric Swalwell, do you remember Gary Condit? Even though you were only 20 when he achieved infamy, congressman, you could probably learn a lesson from your fellow Californian.

Condit, for those of you who forgot, was a California Republican representative who confessed to having an affair with intern Chandra Levy, who disappeared in 2001.

To make his situation worse, in late August, the congressman made the mistake of giving an interview to Connie Chung that was so shockingly bad that everyone assumed that he’d killed Levy, absent any evidence to that effect.

Then August turned to September 2001, a month in which our country endured its greatest tragedy since Pearl Harbor. Amid 9/11 coverage, no one cared about Gary Condit anymore.

Over the next few months, Levy’s body was found and the subsequent investigation exonerated Condit, who quietly lost his primary in 2002 and faded into oblivion after leaving office in 2003.

Along the way, the congressman made sure not to make any waves during those turbulent months, and while he lost his seat, few people remember that summer where we were all busy casting him as a central figure in a true-crime drama.

Congressman Swalwell, no one thought you were a murderer. At least that was on your side. However, before the Capitol incursion last Wednesday, everyone assumed you’d slept with a spy. That’s because your professional relationship with Christine Fang, also known as Fang Fang, also might have been something more.

You were given a “defensive briefing” by the FBI about Fang, a Chinese agent who had been trying to establish relationships with up-and-coming politicians.

She helped you fundraise in 2014 and placed an intern in your office. This persisted until that “defensive briefing” in 2015, although members of your family remained friends with Fang on Facebook until the story broke.

The problem was that Fang had a tendency to sleep with some of her marks; you’ve refused to deny that you had sexual relations with that woman. When all you need is to deny you had carnal knowledge of a Chinese spy and you can’t do it, that leads people to an inexorable conclusion.

And we’d all forgotten about it since the Capitol riot and the second impeachment of President Donald Trump have dominated the news.

You could have just faded into the background for a little while — said the requisite things about how outraged you were, hit the bingo card of popular buzzwords — “sedition,” “insurrection,” “coup”– and stayed slightly relevant as events swirled around you as we all forgot you won’t deny having slept with a Chinese spy.

You did not. Instead, you decided to compare Trump to Osama bin Laden:

RELATED: China Overjoyed It Will Now Be Meeting with Biden at Negotiating Table: ‘New Window of Hope’

For the rest of us looking for context: During PBS’ coverage of impeachment, anchor Judy Woodruff told Swalwell that, when it came to incitement, Republicans were “saying holding him accountable is different from the people who were directly involved in tearing down the doors and rampaging the Capitol building.”

“Well, Osama bin Laden did not enter U.S. soil on Sept. 11, but it was widely acknowledged he was responsible for inspiring the attack on our country,” Swalwell said.

“The president, with his words, using the words ‘fight,’ with the speakers that he assembled that day, who called for ‘trial by combat’ and said we have to ‘take names and kick ass,’ that is hate speech that inspired and radicalized people to storm the Capitol.

Was this an inappropriate comparison by Swalwell?

“When you read the indictments from the U.S. Attorney’s Office of people who have been arrested, in their FBI interviews, they cite that they were called there by the president.

“They were there in the Capitol because the president told them to do so. We must hold the president accountable for his inciting words.”

I believe it’s evidence of a benevolent divine deity of some sort that this man wasn’t one of the lower-tier candidates for president who made the jump, however briefly, to the upper tier. Say what you will about Pete Buttigieg or Andrew Yang, they’re not giving PBS interviews comparing the president to Osama bin Laden and implying he bore the same culpability as the terrorist leader.

Just so we’re clear, bin Laden was the mastermind behind 9/11 as well as other terrorist attacks, such as the bombing of the USS Cole; he provided not only the planning but the material support as well.

This isn’t to say that Trump’s speech was something worth defending. It’s merely to say that it doesn’t make the president a terrorist — or an insurrectionist, for that matter.

Woodruff asked Swalwell if he was really making that comparison.

“I’m comparing the words of an individual who would incite and radicalize somebody, as Osama bin Laden did, to what President Trump did,” Swalwell said.

“You don’t actually have to commit the violence yourself, but if you call others to violence, that itself is a crime.”

Again, that’s not what bin Laden did. He didn’t incite and radicalize people to commit crimes, he made them happen. Michael Corleone wasn’t known to shoot people on his own very often, but he didn’t just “radicalize” his underlings to murder people with his words.

And yet again, Mr. Swalwell, we’re reminded that you exist and that you still haven’t told us whether or not you had intimate relations with a Chinese spy.

Not to say we wouldn’t have been reminded anyway, since you’re one of nine impeachment managers who’ll present the House’s case to the Senate. You’re also active on social media, after all, since you accused freshman GOP Rep. Lauren Boebert of Colorado of committing a crime when she said Speaker of the House Nancy Pelosi had been removed from the building during the Capitol riot.

Like any citizen who has committed a crime, Lauren Boebert has the right to remain silent. I suggest that she use it. https://t.co/GV00rKzcw6

Cue Boebert: “Did you give the same legal advice to Fang Fang?”

Did you give the same legal advice to Fang Fang? https://t.co/YhD5ws2Rxv

You couldn’t have just pulled a Gary Condit, representative?