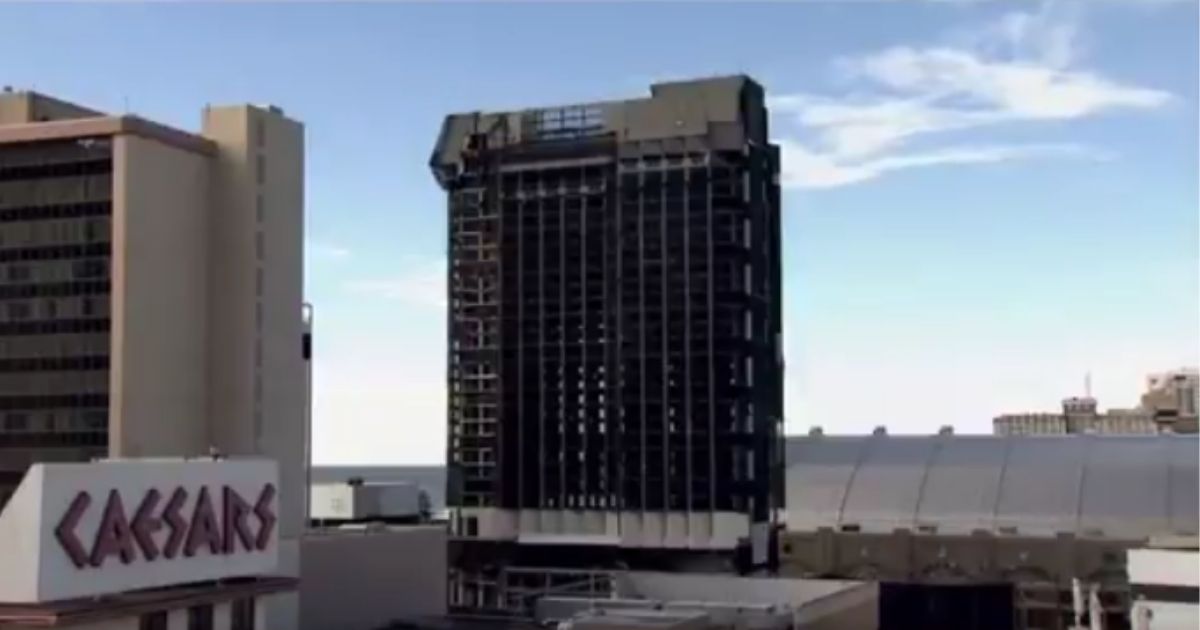 A crowd of eager onlookers watched on Wednesday in Atlantic City, New Jersey, as the building that once was a hotel and casino owned by former President Donald Trump was demolished.

The Trump Plaza Hotel and Casino closed in 2014. Trump hadn’t owned the property since 2016, The Press of Atlantic City reported.

The towering building was a staple on the city’s boardwalk for decades but had fallen into disrepair, along with much of the rest of the city, which previously was billed as an East Coast Las Vegas of sorts.

NJ.com’s reporting on the event was a tad celebratory in tone.

“Hundreds of people drove to Atlantic City on the blistery cold Wednesday morning for a spectacle the resort town hadn’t seen in 13 years,” the outlet reported. “In just a matter of seconds, 30 years of history along the Atlantic City boardwalk was reduced to a pile of rubble and a billowing cloud of dust during the implosion of the Trump Plaza.”

Indeed, videos from online show the scene was a spectacle.

Trump Plaza tower comes tumbling down with a blasting Atlantic City this morning a few minutes after 9 am pic.twitter.com/x7pDz69wDn

Aside from all that dynamite — an estimated 3,000 sticks, per The New York Times — a raucous crowd celebrated. By a little after 9 a.m. Eastern Time, the building that had stood since 1984 was gone. People who witnesses the implosion seemed pleased to see the building fall.

Certainly, all those who attended the public demolition weren’t there to oppose the former president. People, by nature, generally are attracted to loud explosions and dazzling demolitions.

But there undoubtedly were those who viewed the demolition as some sort of symbolic victory for them — and a defeat for the former president. Those people who celebrated it were vocal online.

At 9 am today, 3,000 sticks of dynamite will level the former Trump Plaza casino, the final destruction of Donald Trump’s mark on Atlantic City NJ. https://t.co/wmzBfdQR3I pic.twitter.com/lwC3j7jICY

RELATED: After Claiming No Vaccine Existed Under Trump, Biden Faults Him for Not Buying Enough, Having No Plan

Wednesday Motivation: The trump Plaza Casino in Atlantic City is being blown to smithereens today.

This, of course, is proof that Democrats and the establishment media don’t know how to quit Trump. He has lived rent-free inside of their heads since the campaign trail leading to the 2016 election. Even though he’s left office, these people appear to be struggling without someone to sling their arrows at.

In reality, what once was the Trump Plaza Hotel and Casino was simply an empty building that Trump used to own. The building was his in an era when Atlantic City was a fashionable place to go and stay.

Do Democrats seem a bit lost without Trump in office?

That era is over, as Atlantic City now is a shell of its former self.

Trump has owned several buildings, and after exiting the Atlantic City casino business, he obviously moved on to bigger and better things.

But the people who most vehemently disapproved of his term in office haven’t moved on from him, and they’ve resorted to celebrating routine building demolitions as victories. If anything, Wednesday’s building takedown shows how potent the former president still is as a political force.