Home Daily News Watch: Bidens Neglect to Say ‘Jesus’ During Easter Message, Use It to... 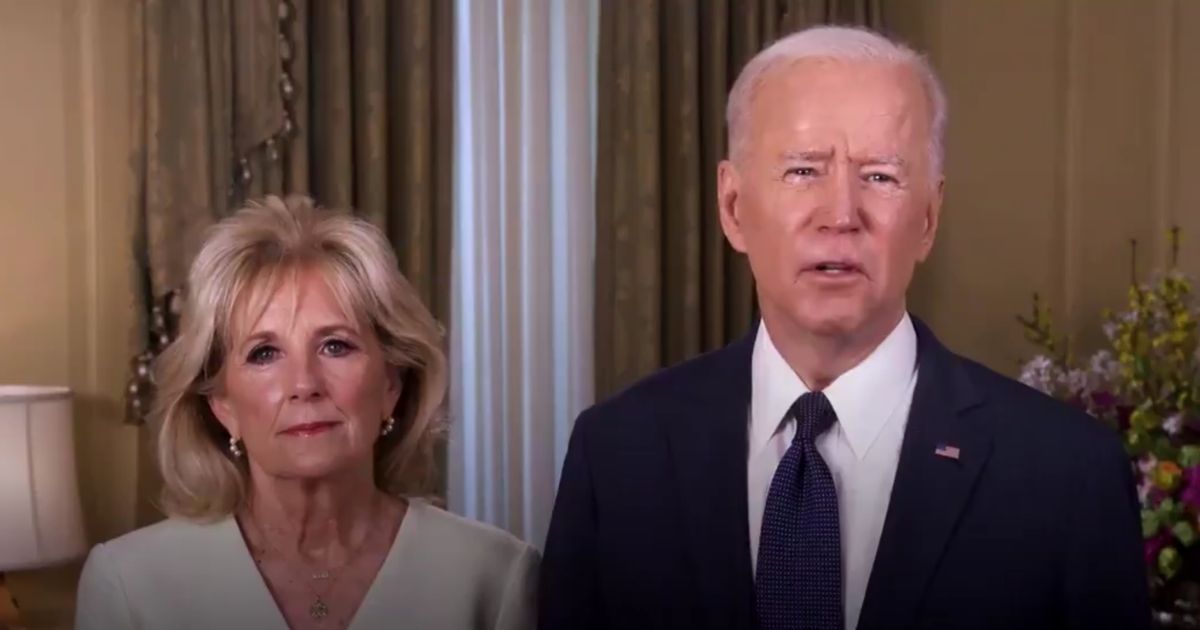 These days, a growing number of Christians opt to refer to Easter Sunday as “Resurrection Sunday” to distinguish it from the cultural traditions of egg hunts, spiffy hats and brunch.

Our president of the United States, who we have been emphatically assured is a Devout Catholic™, meanwhile, made no mention whatsoever of any resurrection or anyone who may have once been resurrected during his first Easter Sunday address.

He did manage to include gratuitous language on the ongoing pandemic, however, and adamantly urged Americans to get the coronavirus vaccine.

This was a choice he and his handlers in no way felt was at all irreverent, divisive or provocative as millions of the nation’s Christians were celebrating their most sacred holiday, apparently.

Yes, Biden failed to mention the Lord Jesus Christ in his Easter comments to the nation, but he did manage to mention Pope Francis, although this seems to have had more to do with the pontiff’s support for vaccination than it did the particular day of the liturgical calendar.

First lady Jill Biden joined her husband as he wished Americans the “warmest Easter greetings” by way of a video posted to the official presidential Twitter account.

From our family to yours, we wish you health, hope, joy, and peace. Happy Easter, everyone! pic.twitter.com/3NHPrbFCVt

Biden mentioned in passing a “most holy day” as he squinted at the teleprompter, heroically executing his albeit slightly slurred words with near-complete coherence, for once, although his spouse appeared somewhat anxious he could at any time fall headfirst into yet another headline-grabbing slip of the tongue.

Should Biden have politicized his Easter message?

The first couple offered Americans words of the most general and benign nature about “light shining in the darkness” as Christ is described in the Gospel of John. Rather than this light as the good news of Christ’s atoning sacrifice and victory over sin and death, the first couple seemed to think this “light” was rather the hope that we will overcome coronavirus if we all cooperate and get our jabs.

Dr. Jill said that the “traditions of Holy Week” take us on a “journey from sorrow to salvation,” although what this journey is and who went on it are not mentioned. Moreover, the use of the word “traditions” signaled heavily that this was not inherent, fundamental truth that Americans are celebrating on Easter Sunday, but rather the kind of unoffensive, squishy ideas like “hope” and “peace” that progressives like to reference when trying to be generous to those of devout faith.

It was at this point that the halfhearted attempt to pay homage to a major Christian holiday converted into a PSA as Biden piped up again to take a firm and bold stance on a major ethical debate within broader Christendom.

“We share the sentiments of Pope Francis, who has said that getting vaccinated is a moral obligation, one that can save your life and the lives of others,” he declared, almost defiantly of anyone who would dare suggest otherwise.

“By getting vaccinated and encouraging your congregations and your communities to get vaccinated, we not only can beat this virus, we can also haste the day when we can celebrate the holidays together again,” he continued.

Well, there went any inkling that this was really just a nice, heartfelt Easter message from the first family amid one of the most divisive periods of American history.

This is not the first time that Biden has sidestepped a mention of a person of the triune God on a Christian high holiday.

The now-first couple’s Christmas message in 2020 was similar. While then-President Donald Trump’s address on the holiday pointedly began, “More than 2000 years ago, God sent his only begotten son to be with us,” Biden’s simply celebrated our “common humanity” and “what we were called to do for one another.”

The rest of the sanitized holiday message made no mention of who calls and was better suited for Americans who prefer placating niceties in lieu of an established moral worldview than it was for devout Christians.

From our family to yours, Merry Christmas and Happy Holidays. pic.twitter.com/NzVEFFfrG1

It might concern you that the president of the United States is pushing a major Christian holiday to encourage a widescale government vaccination program.

It absolutely should concern you that he felt more emboldened to politicize this message than he did dare to mention the name of the Lord he claims to serve.

The Democrats prefer these politically correct platitudes to fundamental truth because at the end of the day, their party platform is predicated on statism rather than theism, the latter of which the American system was founded on.

Biden has made clear what he believes the American public should revere — the state, not the God who gave us the rights the Founding Fathers intended to limit the state from infringing.