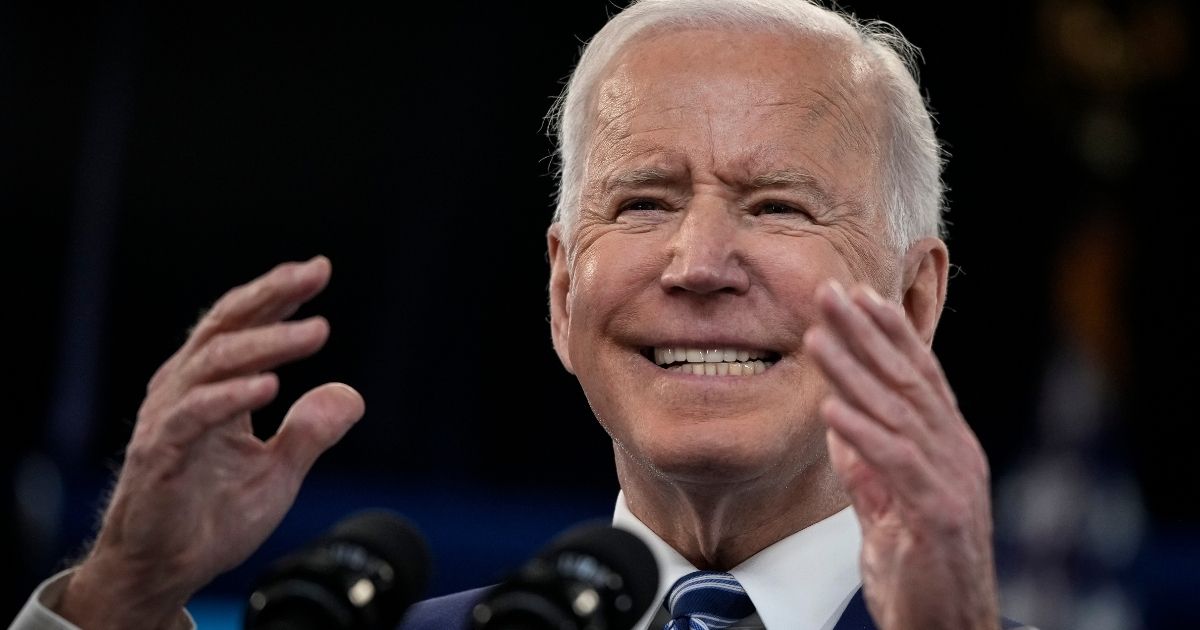 On Monday, President Joe Biden gave remarks from the White House on the progress of COVID-19 vaccination efforts amid rising cases of the virus and loosening of pandemic-related restrictions around the country.

As Biden warned Americans that the ongoing health crisis was “deadly serious,” he conspicuously stumbled over his words on too many occasions not to merit comment from a public already concerned about the commander-in-chief’s cognitive health.

In the span of just 53 seconds, he made a number of concerning errors that are impossible to ignore.

President Biden calls on states/localities that have lifted mask mandates to reinstate them:

“This is not politics. Reinstate the mandate if you let it down.” pic.twitter.com/phZUOtM7Oa

This is hardly the first occasion that the president has had difficulty making remarks but the more these incidents keep piling up, the more bizarre this whole period of history gets.

While discussing efforts to increase vaccination rates Biden said during his comments, “And with the supply we’re releasing this week — just this week alone — there are more doors — ” before struggling over some indecipherable words.

After righting himself, he continued with the broken-off sentence, “There are more doses of vaccine available for seniors this week than any week thus far. So, seniors, please, if you have not gotten your shot yet, get it this week. Get it.” He successfully navigating these subsequent words yet audibly slurred a few subtle syllables.

“Second,” Biden went on, still slurring slightly, “I’m reiterating my call for every governor, mayor and local leader to maintain and reinstate the mask mandate. Please, this is not politics. Reinstate the mandate if you let it down. And business require masks as well.”

“The [unintelligible] to take this virus seriously,” he continued, unable to articulate a word that the White House transcript of the remarks identified as “failure,” is “precisely what got us in this mess in the first place — risks more cases and more desks.”

Catching this last slip of the tongue, Biden faltered again before recovering his speech well enough to finish with the correctly pronounced “deaths.”

Earlier this month, Biden had a moment of bizarrely slurred speech while speaking with ABC’s George Stephanopoulos.

There were also several noteworthy moments on the campaign trail last year in which he spoke incoherently and unintelligibly, including his promise of an “effective strategy to mobilize truinnerashuvaduprezure” (which, by the way, we’ve yet to see from the Biden administration — looks like this vision of effectively mobilized truinnerashuvaduprezure was just another empty campaign promise after all).

Up until last week, the Biden administration received mounting criticism for the president’s failure to hold a solo news conference for a record-breaking number of days since taking office.

When this streak was broken last Thursday, a tired-looking Biden appeared before reporters with a handy cheat sheet for who to call on and armed more notes than one is used to seeing a POTUS bring to a news conference.

Although many in the media expressed pleasant surprise that he had managed to string several coherent sentences together, it was not without its moments of now-classic Biden cognitive failure.

Look, let’s be real and lay out the facts as they are. You can put all political bias aside yet cannot ignore this stark and concerning trend.

He has had an ankle injury since the November election and a major on-camera fall since taking office. His handlers frequently appear to shelter him from the press.

He is now known for fumbling and slurring over his words in public, all as it appears the White House wants to carefully curate his on-camera appearances.

They continue to insist he is perfectly fine, yet the lengths being gone to for the sake of downplaying Biden’s concerning verbal blunders is highly conspicuous at best.

On Monday, the White House was honest enough to note in their transcript a few [sic]s where Biden had slurred or fumbled over his words, but just last week when Biden mixed up the names of two key Middle Eastern leaders, the official transcript was plainly altered in an apparent cover-up of the blunder during his Thursday presser.

Anyone who has been paying even the slightest bit of attention to the president’s on-camera behavior will be difficult to convince at this point that something isn’t seriously amiss.

What in the heck is going on with this dude and for how much longer are the American people going to be kept from the truth about his condition?