Home Daily News Watch: Biden Gets Inches from Woman’s Face and Tells Her to Social... 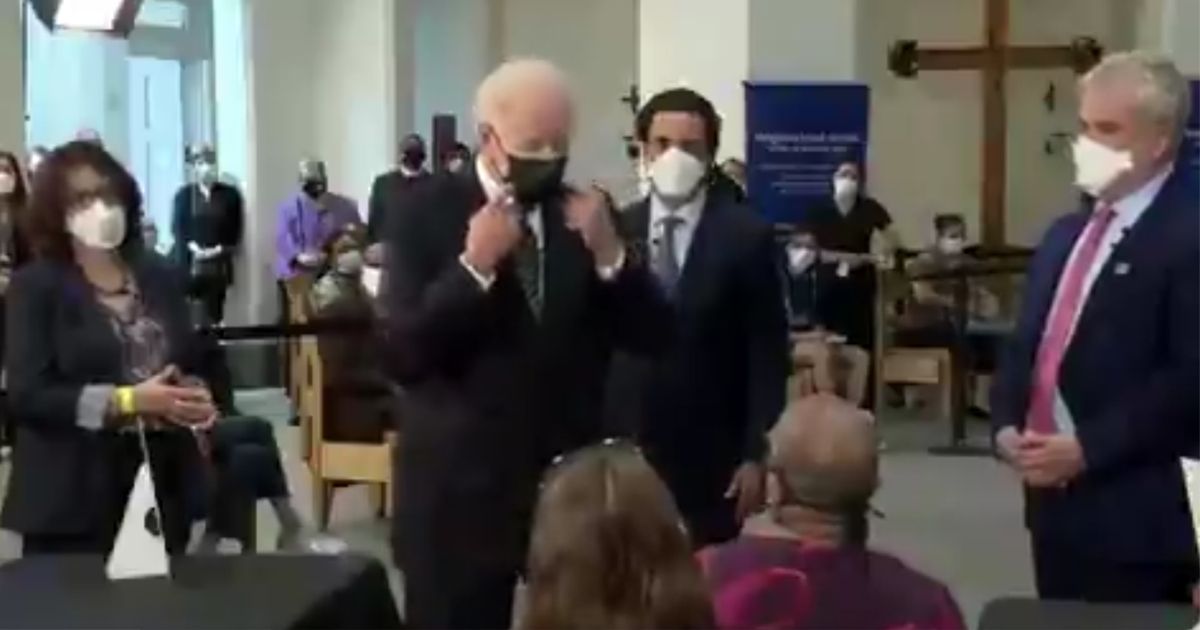 I need to be completely honest with you, dear reader. It’s actually getting difficult to sound original while critiquing President Joe Biden’s unrelentingly odd and muddled behavior.

Is this what leftists felt like for the last four years when critiquing former President Donald Trump? I mean, they did seem to run out of anything original to say about “the Orange Man” about five seconds into his presidency — let’s be real.

Of course, the difference between our two most recent heads of state in this regard reflects rather poorly on the current president, as opposed to the former.

Say what you will about Trump — the man could complete full sentences in public like a boss, always seemed to appear to understand what was going on and what he was doing and was at least fairly capable of conducting himself in a manner that is typical for a regular adult human being in relation to respecting the personal space of other humans the vast majority of the time.

Biden, on the other hand … well, amazingly, we simply cannot say the same for him as he consistently appears to struggle to do any and all of these things — a problem which seems to have only been exacerbated by the fact that he is now the leader of the free world.

Is Biden up for the job of POTUS?

Now, the whole issue of presidential regard for personal space aside, you would think that to be capable of conducting a normal conversation, giving comments with some degree of mental acuity in public, keeping track of what one is doing on his official business (or remembering who or what the defense secretary is or the “outfit” he heads) would be rather basic expectations to have for the president of the United States.

But alas, our nation’s standards for leadership have apparently sunk this perilously low.

Joe Biden just told a woman to social distance while himself maintaining merely inches of space between their respective faces. It is becoming increasingly difficult to accurately describe the absurdity of everything going on in America right now. Sigh.

Biden leans inches from someone’s face and tells them to socially distance. pic.twitter.com/30WwMvk8dJ

In the video posted to Twitter on Monday, Biden addressed a woman in what appeared to be a church on the importance of masks, hand washing and social distancing. Social distancing, as it happens, is something which he promptly noted he himself was not doing.

As he told the woman to “keep wearing a mask,” he pointed at his own. He then swept down right smack in the middle of the poor woman’s personal space.

Biden continued that one ought to “wash the hands and socially distance” — the latter he immediately admitted jokingly, “I’m not doing,” as he reeled it right on back into his own six feet of personal safety space.

Onlookers nervously laughed off-camera as yet another indication that the emperor is wearing no clothes sailed carelessly by.

RELATED: We’ve Got It: Read the Full Press Release About Suspected Terrorists Arrested at Border That DHS Deleted

Was this merely a joke? I mean, maybe, but what a joke that is! Biden regularly regales us with urgent warnings of the ongoing, deadly pandemic, even going as far as to bulldoze right over the Lord Jesus Christ in his Easter address so he could exploit the holiday to push widespread COVID-19 vaccination.

Yet he is either so callous or so clueless as to lean down into a woman’s face right on camera surrounded by dozens of people as he’s about to tell her to socially distance.

How can we not be expected to hold his behavior to the same meticulous standard that the establishment media held Trump’s every inflammatory move, at best?

None of this is OK.