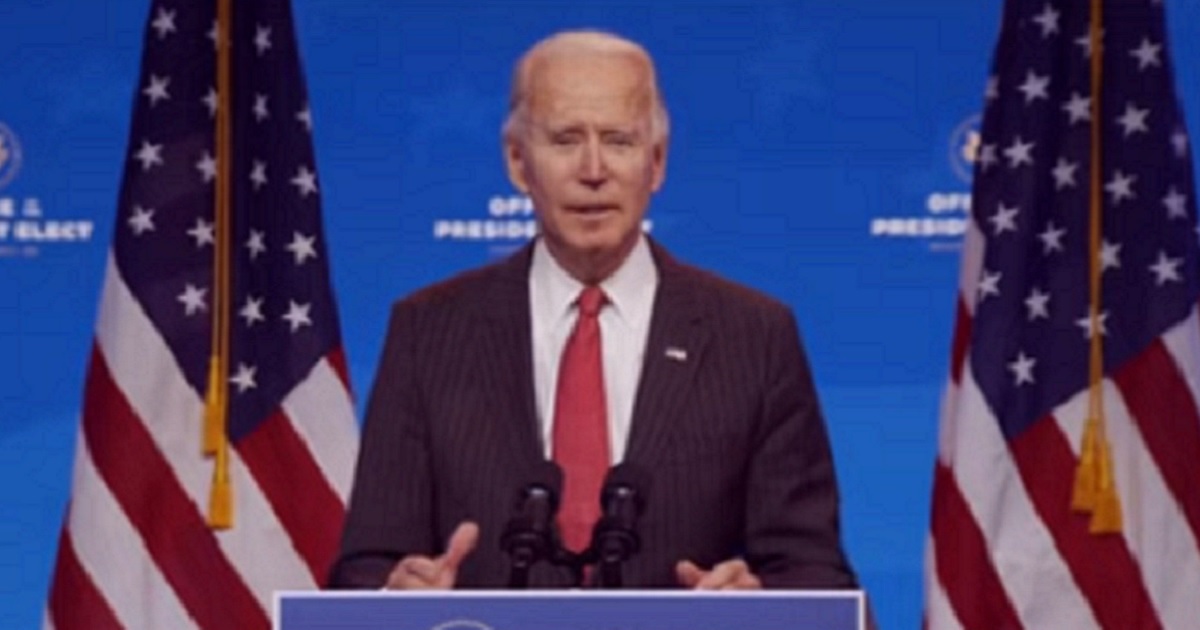 Joe Biden has been proclaimed by the mainstream media as the winner of the 2020 presidential election, which means the tight control exercised upon him during his basement campaign can (indeed, has to) stop for the time being.

He’s not running for anything, which means ol’ Uncle Joe can be loosed upon the public again.

Nowhere was the newly unshackled Biden more on display than during a news conference last week following a virtual meeting with the National Governors Association Executive Committee.

Biden discussed his plans for fighting COVID-19, which included mobilizing the soldiers of the National Guard and invoking the Defense Production Act. His way of calling for it, however, might have been a bit different from what you’d expect.

“We discussed the need to help states with Title 32 funding for the National Guard,” Biden said, then began bumbling.

This was a solid six minutes into his part of the presser and toward the end of what were, one assumes, scripted remarks. This wasn’t a particularly difficult issue, either.

Do you think Joe Biden is in cognitive decline?

Title 32 is neither “fancy” nor difficult to comprehend, nor much like how Biden described it. Here’s a quick rundown: Title 32 gives states federal funding for the National Guard, in addition to expanding the benefits available to guardsmen.

In states like Pennsylvania, for instance, PennLive reports the National Guard has been working at long-term care facilities beginning in the spring. In Michigan, guardsmen have been distributing food at food banks, delivering personal protective equipment and distributing coronavirus tests, according to WEYI-TV.

The authorization for Title 32 funding for the pandemic was first signed by President Donald Trump in March and was last reauthorized in August. However, it only provided 100 percent funding for a select group of states that were hard hit by the virus, according to The Hill. It expires in December and some lawmakers want it extended.

I’m not saying Biden needed to go into that kind of detail, but this is something a sentence or two could have easily summed up. Neither of those sentences involve referring to Title 32 as a “fancy way of saying governors, governors need to be able to get funding when they disp— when they dis— they need to, uh, and, and, bring their, bring their National Guard into play.”

Moving on to the question-and-answer portion of the Thursday news conference, things were as concerning.

It’s not like Biden was asked a difficult question. Instead, someone merely repeated back to him his assertion that “if this transition doesn’t get going, especially coordination on vaccine distribution, that lives will be lost” and asked “[h]ow many lives do you think are at risk here if this transition remains stalled?”

Biden responded that a shortened transition is “going to put us behind the eight ball by a matter of a month or more” but he “can’t tell you” how many lives will be lost as a result of it. As for how he knows lives will be lost or how the unusual aftermath of an unusual election puts his team behind the eight ball, even though this could have been predicted months ago, no one bothered to ask about that — and we’ll get to the difficulty level of these queries in a bit, because it bears examining.

However, we then had a graceless attempt at explaining how he’d solve COVID-19 supply issues under a hypothetical Biden administration:

“I’m going to — we’re going to impose the — we’re going to enforce the — excuse me, employ the defense, reconstruct the act, to be able to go out there and dictate companies build and do following things,” Biden said.

Right. So this involves the Defense Production Act, a 1950 federal law under which companies can be compelled to manufacture necessary equipment in times of war or emergency. President Trump invoked it on March 18 but didn’t use it until later in the month because, according to Trump administration Defense Production Act coordinator Peter Navarro, they “ran into roadblocks” getting General Motors to manufacture ventilators.

Biden has said he would have invoked the DPA earlier, although FactCheck.org notes there’s scant evidence to this effect. According to BloombergQuint, Biden says he plans to use the act to increase testing supplies and personal protective equipment.

This, again, isn’t a particularly difficult concept to explain. Gaffing one’s way through a sentence to express that fact isn’t a confidence-instilling sight.

But, again, don’t expect anyone from the media to pounce on this. Here are a couple of the questions Biden was asked on Thursday:

Maybe this is just because it’s the issue of the day. Maybe it’s that this is the honeymoon period for a professional and parasocial relationship the mainstream media openly desired to have with a new administration.

Perhaps over time, familiarity will breed, if not contempt, at least objectivity. Given the laxity with which reporters have probed Biden’s gaffes up until now, however — particularly how they’d jump on these solecisms if Biden were a Republican — holding one’s breath for that would be asking for cyanosis.