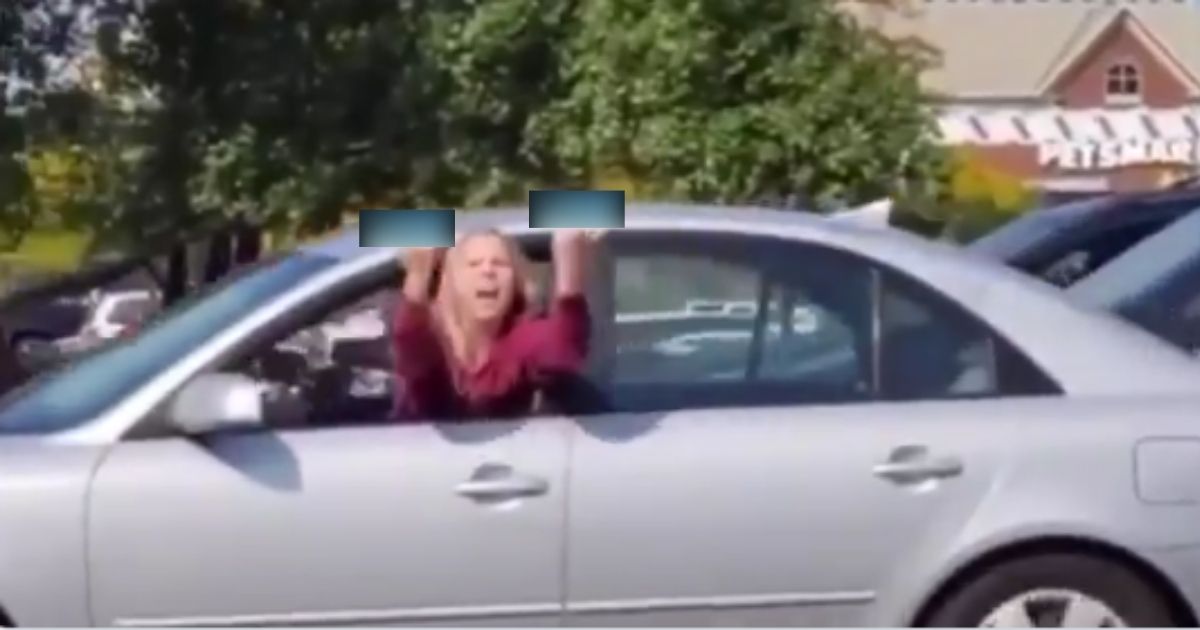 A driver’s anti-Donald Trump tirade appears to have caused her to accidentally take her foot off the brake and nearly rear-end the car in front of her, according to a video that went viral on social media this week.

It wasn’t clear where or when the video was taken, but in it, a female driver stops paying attention to the road while appearing to scream “F— Donald Trump” out the window of her vehicle and directing obscene gestures toward an apparent crowd of Trump supporters gathered for a street rally.

WARNING: The tweet and video below contain vulgar language that some viewers may find offensive:

The woman’s car was initially stopped in traffic when she started shouting.

Then, she took her eyes off the road and leaned her face out the window to continue screaming and making obscene gestures.

The woman apparently took her foot off the brake as she was leaning out the window, and as a result, her car nearly rear-ended the vehicle in front of her:

KARMA IS A BITCH !!!
Biden supporter gets triggered over TRUMP street corner rally and causes a fender bender in front of the POLICE 😂😂😂
TRUMP 2020 pic.twitter.com/39oZB3r5qL

It’s not clear from the video whether she actually caused a fender bender, though the distance between her vehicle and the one in front of her right after she slammed on the brakes suggests she did not, in fact, hit it.

Do you think political extremism is destroying any semblance of civility in this country?

The woman seems to have gone off on her tirade and disregarded road safety right in front of police, as sirens sounded and law enforcement was on the scene seconds after she nearly hit the other car.

The political affiliation of a group of people you disagree with should never be cause to throw this sort of tantrum.

As the political climate in this country grows increasingly polarized, politically motivated harassment is becoming all too common. The hatred for President Donald Trump is simply unsurpassed in comparison to other recent presidents.

But the average person does not even have to like Trump or agree with his policies to know that unrest as a result of his existence is uncalled for.

Criticism of a public official is one thing, vulgarity and harassment is another.

Following the conclusion of the Republican National Convention at the White House last month, attendees were harassed and verbally attacked by leftist protesters while heading back to their hotels and residences.

Kentucky GOP Sen. Rand Paul was among those confronted after the convention by protesters chanting “say her name.” The chant was in reference to Breonna Taylor, a woman who was shot and killed by police executing a no-knock search warrant at her apartment during a narcotics investigation in March.

Ironically, Paul is the author of the Justice for Breonna Taylor Act, which would generally prohibit no-knock warrants.

Obviously, the protesters did not know or care about the facts of what Paul was doing on the issue of police reform — they just wanted to cause problems.

These incidents are only a glimpse at the attacks public officials and civilians face every day for not caving to the mob.

Whether it is a deranged woman screaming from her car or an angry mob, some people will do anything to intimidate those they disagree with.

Nobody should ever fear for their safety for sharing their opinion.

Unfortunately, extremism is destroying any semblance of civility in this country.