Home Daily News Washington DC Will Continue to Look Like a War Zone Until at... 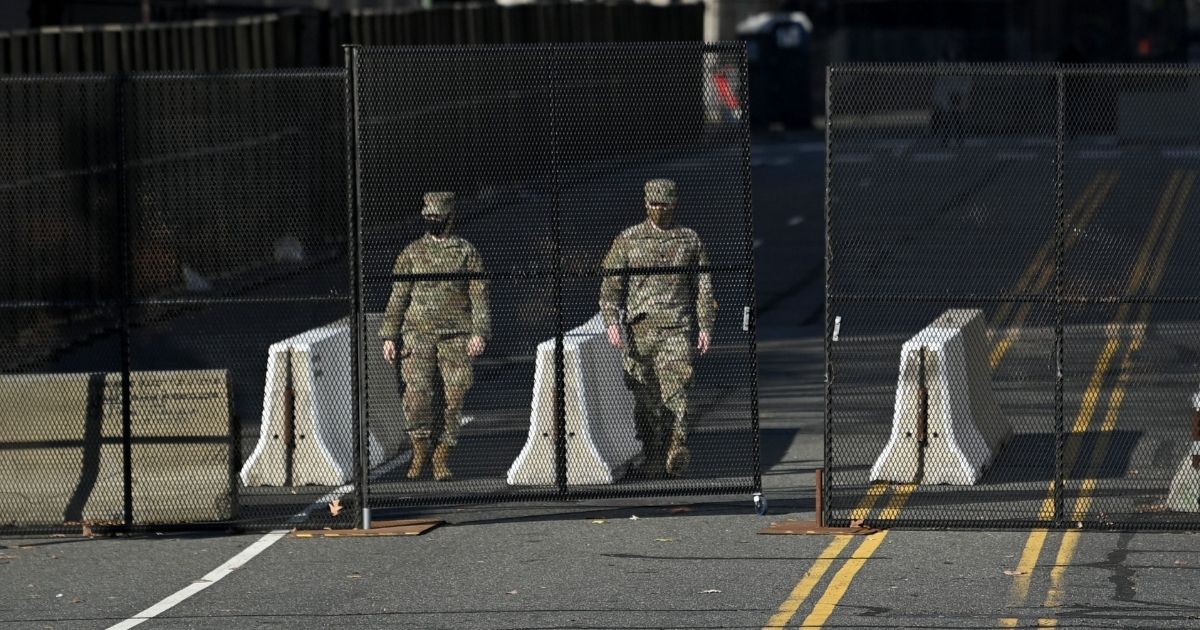 After the Jan. 6 Capitol incursion, an event where no National Guard troops were stationed where Congress was certifying the Electoral College even though the outgoing head of the Capitol Police says he requested their presence, roughly 26,000 National Guardsmen were deployed to the nation’s capital for President Joe Biden’s inauguration. That’s about a third of the troops in the entire Middle East, according to an Axios report from last year.

And at least for a little while, the district is going to look a bit more like Fallujah than Foggy Bottom.

A spokesman for the National Guard told Fox News Tuesday that thousands of Guardsmen would remain in D.C. through the end of March due to fears surrounding the impeachment trial of former President Donald Trump and other potential threats.

“As we continue to work to meet the final post-inauguration requirements, the National Guard has been requested to continue supporting federal law enforcement agencies with 7,000 members and will draw down to 5,000 through mid-March,” said National Guard Bureau spokesman Wayne Hall.

“We are providing assistance such as security, communications, medical evacuation, logistics, and safety support to state, district and federal agencies.”

Roughly 13,000 Guardsmen remain in Washington, according to Fox. A spokesman told the network that “[t]he D.C. National Guard will remain on orders until March 31, 2021.”

What are the threats that’ll keep D.C. looking like a war zone? Aside from Trump’s Senate trial, scheduled to start Feb. 8, there’s a new cause for alarm.

“Recent chatter surrounding protests on the ‘historic’ Inauguration Day — formerly held on March 4, before being changed to Jan. 20 in 1937 — have security officials worried,” Fox News reported.

Should the National Guard remain in Washington, D.C.?

One doesn’t want to discount a potential threat to our nation’s capital during our historic Inauguration Day, a day on which no president since Franklin Delano Roosevelt has been inaugurated. However, aside from being curious as to why the old Inauguration Day allegedly holds enough significance for an attack from right-wing crazies, I’d like to know why we need up to thousands of troops in Washington until the end of March to stop said attack.

No, the 7,000 and 5,000 numbers the National Guard mentioned to Fox are not as many troops as we had there on the current Inauguration Day, where 26,000 soldiers and airmen were in town. However, the idea that a quarter of that force — still more troops than are currently in Afghanistan, it’s worth noting — is needed to protect targets in D.C. feels like a difficult sell.

As Fox News’ Tucker Carlson pointed out in a monologue during his Jan. 18 show, this is also more troops than were in the capital during the riots of 1968 — or in D.C. when we were fighting a national insurrection and our country’s bloodiest war.

“In 1864, as the Civil War raged on the other side of the Potomac and Americans died every day in large numbers in battle, there were fewer federal troops protecting Washington, D.C., than there are tonight,” Carlson said, two nights before the inauguration.

RELATED: 44 GOP Senators Stand with Rand Paul on Motion That the Impeachment Trial Is an Unconstitutional Sham

Carlson had a different idea about why those troops were there.

“No matter what they are telling you, those 26,000 federal troops are not there for your safety,” Carlson said.

“Instead, unmistakably, the Democratic Party is using those troops to send the rest of us a message about power: ‘We’re in charge now. We run this nation from Honolulu to our colony in the Caribbean and everything in between, very much including where you and your family live. Do not question us. Men with guns enforce our decrees. We control the Pentagon.’”

That’s one interpretation. Another is that the political party that once vilified conservatives for overreacting to perceived terrorist threats in the wake of 9/11 is now skittish enough to believe the Capitol incursion necessitates a prolonged troop presence in the nation’s capital.

While the new administration and its enablers in the media will insist — in the most soothing of tones — that everything is back to normal now, the armed forces remain in the nation’s capital, in strength.

But why stop there? Keep the troops in D.C. just in case something happens. I mean, there are loads of other days just as tempting to domestic extremists as the “historic” Inauguration Day.

Tax day falls on the same day Abraham Lincoln died — April 15. That’s a double whammy that the Proud Boys won’t be able to resist. As long as the National Guard is still in the District of Columbia, hey, Memorial Day is right around the corner. June 14 is Donald Trump’s birthday, which might be a rallying point for MAGA-friendly militia members. And don’t even get me started on what July 4 is going to bring.

Yes, that’s all absurd. So is a lot of what we’ve seen in the wake of the Capitol incursion.

A week and change ago, for instance, we were told that armed groups were supposed to be marching on all 50 state capitols. If you forgot about that, there’s a good reason. NPR surveyed coverage from its member stations to see how that threat played out.

In Austin, Texas, KUT reported that “[a] couple dozen armed demonstrators gathered at the Texas Capitol on Sunday” with a “message of individual liberty.” It went mostly unheard, thanks to the fact that the grounds were closed.

In Tallahassee, Florida, WFSU reported that despite warnings of a violent protest, “Florida’s capitol grounds mostly saw journalists roaming about, and the occasional tourist and residents taking photos of the historic capitol building.”

There was also “relative quiet at the Oregon State Capitol” in Salem in spite of the fact that several “boogaloos” — members of a heavily armed left-wing sect of (seriously) Hawaiian shirt-wearing extremists who believe they’re going to be part of starting the second Civil War — were present.

At the Michigan Capitol, the crowd was described as “eclectic, but small and dull,” according to Michigan Radio.

“I’m really surprised. I figured there’d be more than this,” said one Trump supporter at the Colorado Capitol in Denver, according to Colorado Public Radio.

There wasn’t more than that. There likely won’t be on the “historic” Inauguration Day, either.

If there is, however, law enforcement can deal with it without deploying thousands of National Guard troops for months. This is a pernicious waste of resources in the name of Trump-security theater, an exercise in Democrats trying to shame Republicans by insisting the District of Columbia needs to look like a war zone because of the 45th president.