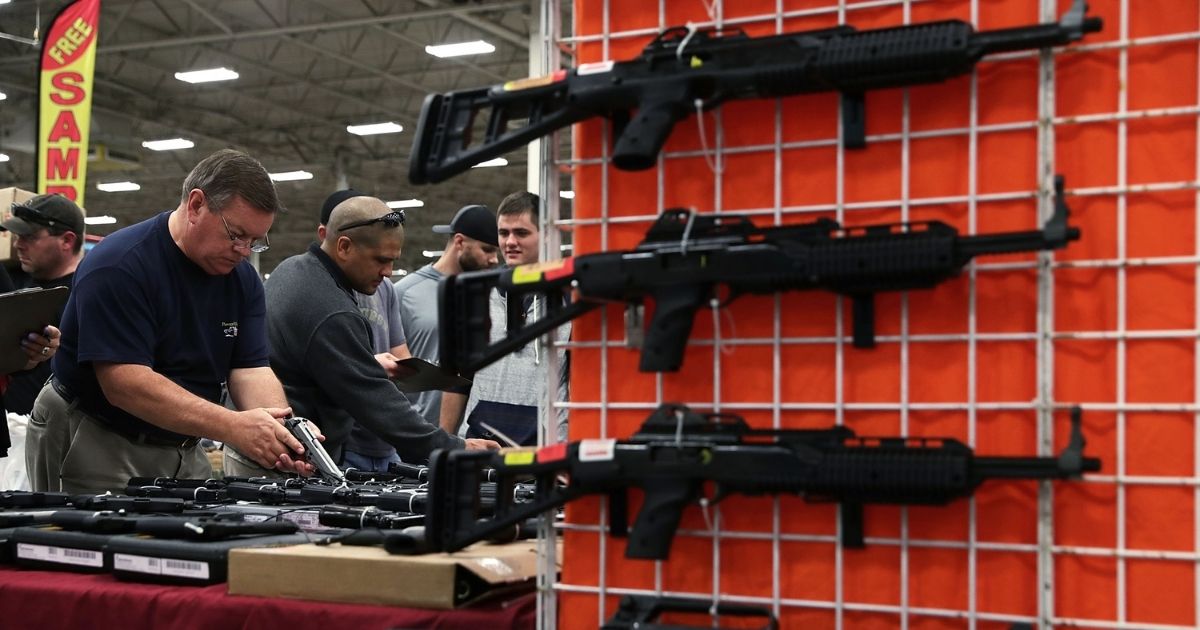 A bit of a primer for those of you who have never been to a gun show: First, it’s a bit like calling Whole Foods a “grocery show” or the flea market an “old books and Sega Genesis games show.”

This isn’t to say shopping can’t be entertainment, but you’re not there to be entertained. You’re there to peruse or purchase guns, ammunition or firearm-related items. There aren’t going to be any small group meetings, no “Rocky Horror Picture Show”-esque hecklings of “Bowling for Columbine,” no conga lines with women dressed as anthropomorphic Kalashnikovs and dancing along to a bossa nova version of “Happiness Is a Warm Gun” — nothing like that.

My assumption is that Democratic Virginia Attorney General Mark Herring knows this, and I also assume he doesn’t care. Virginia’s taken a lurch to the left in recent years, given the growth of the suburbs outside of Washington, D.C. It’s seen some of the Democrats’ biggest victories on gun control in the past decade thanks to a shifting state legislature.

And now, it’s effectively shut down a gun show under its COVID-19 restrictions by insisting the convention center the show was set to be held in is an “entertainment venue” and shouldn’t be classified as a retail establishment under the state’s guidelines.

According to WTOP-FM, the Nation’s Gun Show was blocked by a judge from having any more than 250 people at the event, set to start Friday at the Dulles Expo Center in Chantilly, Virginia, after Herring and the state went to court to argue the convention center should be treated under the stringent guidelines for entertainment venues.

The gun show’s organizers argued the center should fit under the less stringent guidelines for brick-and-mortar retail. In addition to the fact the state’s guidelines didn’t account for the size of the venue — the Dulles Expo Center is a 130,000-square-foot building — they said the decision was an infringement on Second Amendment rights.

Attorney General Herring countered by saying the show “would most certainly become a superspreader event and could infect hundreds if not thousands of Virginians with COVID.”

Judge Brett Kassabian expressed sympathy with the fact the show and its vendors could lose millions but said that “[t]o allow thousands of people to roam unchecked in the throes of the worst pandemic in 100 years is not in the public interest.”

Do you agree with this judge’s ruling?

“I have successfully BLOCKED a massive gun show from operating at full capacity this weekend in NOVA,” he tweeted. “Putting hundreds or even thousands of Virginians at risk for the sole purpose of selling guns is just not worth it and I’m pleased that the Judge agreed with me.”

🚨BREAKING🚨I have successfully BLOCKED a massive gun show from operating at full capacity this weekend in NOVA.

Putting hundreds or even thousands of Virginians at risk for the sole purpose of selling guns is just not worth it and I’m pleased that the Judge agreed with me.

On the gun show’s website, the organizers noted that “the Walmart beside us is an 80,000 sq ft. building, [so] we are 50,000 sq ft. bigger. The Walmart beside us has one giant aisle and the all the rest of the aisles are an average of 6ft or less. We have wider aisles, 14 ft average, so we have more space to social distance. Also, our show and the building management are self-imposing a 50% occupancy limit.”

RELATED: Biden Selects Deputy Chief of Staff Who Isn’t Shy About Wanting To Take Your Guns

The website went on to say that “everyone wears a mask and follows the COVID [requirements]. We have also had two shows already and have not been a super spreader. All we ask is that we are allowed to operate on the same type of business model and at the same level as the Walmart across the road.”

According to the Nation’s Gun Show, they had worked with officials in Fairfax County Health Department, who supposedly confirmed to them on Wednesday that they would be classed as a brick-and-mortar establishment.

“Then much later that day the Governor and the Virginia Attorney General stepped in to close all the similar venues in the state of Virginia as well as ours,” the website reads.

“We fought back and went to court at great expense and lost. We respectfully disagree with the judge’s opinion.”

In a separate statement, Herring said “this win will help keep hundreds if not thousands of Virginians safe and healthy.”

According to The Washington Post, the state argued that events at expo centers bring in more people than brick-and-mortar stores do.

Expo centers also far larger and aren’t as cramped and there’s no evidence workable solutions couldn’t be found that didn’t cap occupancy at 250 people at a massive, high-ceilinged exposition hall.

That kind of cap borders on the ludicrous, especially when you consider there’s absolutely no limit on occupancy in brick-and-mortar establishments, just social distancing requirements. Inasmuch as Target isn’t a super-spreader event, neither is a gun show.

Absurd. They require masks, distancing (it’s a giant space) and limited capacity like any store. And it’s not just guns, you’re shutting down dozens of small businesses that operate rely on this to feed their families.

Would you be doing this if it weren’t a gun show?

This is incredibly stupid. https://t.co/OUPv0Vdrom

Ah, so people can go into walmart all they want, but gun shows are completely off limits? Your brain is broken dude.

You spelled legal citizens being able to defend themselves wrong.

If you’re so anti-gun will you give up your armed protection?

And yes, as some pointed out, the same restrictions apply to other events scheduled for the fall or winter at the Dulles Expo Center.

If any of them go to court challenging the regulations, see if you can picture this tweet coming from Attorney General Herring: “[siren emoji] BREAKING [siren emoji] I have successfully BLOCKED the massive Super Pet Expo from operating at full capacity this weekend. Putting hundreds or even thousands of Virginians at risk for the sole purpose of selling organic dog treats is just not worth it and I’m pleased that the Judge agreed with me.”

When he does this kind of victory lap for non-gun-related events, let me know.

To whatever extent you want to buy that this isn’t about firearms, the Nation’s Gun Show episode showcases how broken Virginia’s new COVID-19 restrictions are.

No super-spreader event was averted, no public health disaster dodged, nothing was accomplished except lighting the money of organizers and vendors on fire.

Given who those organizers and vendors were, however, you get the feeling Herring isn’t going to be too sympathetic, even as he may expose himself to more danger shopping at the “grocery show” across town.