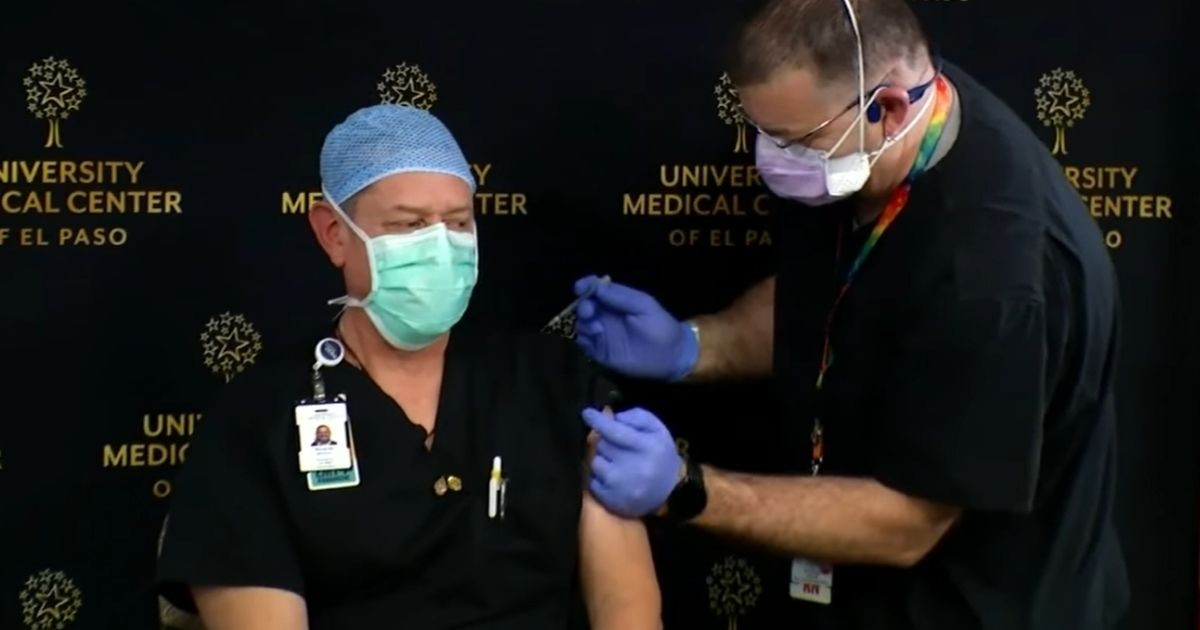 A publicity effort to show the coronavirus vaccine being administered to several nurses at the University of El Paso Medical Center had some unanticipated side effects on Tuesday.

The first doses of the long-awaited vaccine arrived in El Paso, Texas, on Tuesday morning. A few hours later, the first nurses to be given the vaccine were brought before cameras to document the event.

“As a health care worker, I am super excited,” emergency room nurse Crystal Molina said, according to the El Paso Times.

“I am hopeful for the vaccine. As a human being, I am not going to lie; I was a little bit nervous, but overall excited and, hopefully, it will do its job and protect us,” she said.

But when the second nurse, whose name was not released, was vaccinated, there appeared to be a bit of glitch that was spotted by viewers of the event, according to KFOX-TV.

As video of the shot being administered shows, the syringe in which the vaccine was supposed to be appeared to be empty, and the plunger on the syringe was already depressed instead of being withdrawn.

Although the needle went into the nurse’s arm, the person performing the vaccination did not appear to push the already-depressed plunger to administer the shot.

A full examination of the video of all the nurses showed that all but the second nurse appeared to undergo the same routine: The plunger would be depressed after the needle was inserted.

The odd scene was met with skepticism on social media.

Unless there is a new engineering on the syringe I don’t know what going on here.??????????

Board of Medicine and Board of Nursing must be notified and given access to this footage. Please follow this up…

On Wednesday, the University of El Paso Medical Center tried to resolve questions raised by the video.

“After numerous reports emerged on social media claiming one of the five nurses receiving a vaccination on Tuesday did not receive a full dose of vaccine, we want to remove any doubt raised that he was not fully vaccinated and further strengthen confidence in the vaccination process,” the medical center said in a statement to KFOX.

“The nurse in question today was vaccinated again. UMC has confirmed with the US Advisory Committee on Immunization Practices (ACIP) that re-vaccinating the nurse will not cause adverse effects.

“The nurse will need to return after three weeks to receive his second dose.”

“Even though it is just the beginning, we know that a lot of people in our community will benefit from the vaccine,” Ocaranza said. “More so our health care providers who are taking care all the vulnerable people and our loved ones in the hospital. Now they will be able to continue working tirelessly.”

Do you have doubts about the coronavirus vaccine?

He noted that the first vaccines are not the end of the fight against the virus. Vaccines for the general public are not expected to be available until well into 2021.

“The vaccine is another tool we have in our fight against the pandemic, but it doesn’t mean we are going to be changing everything completely.”