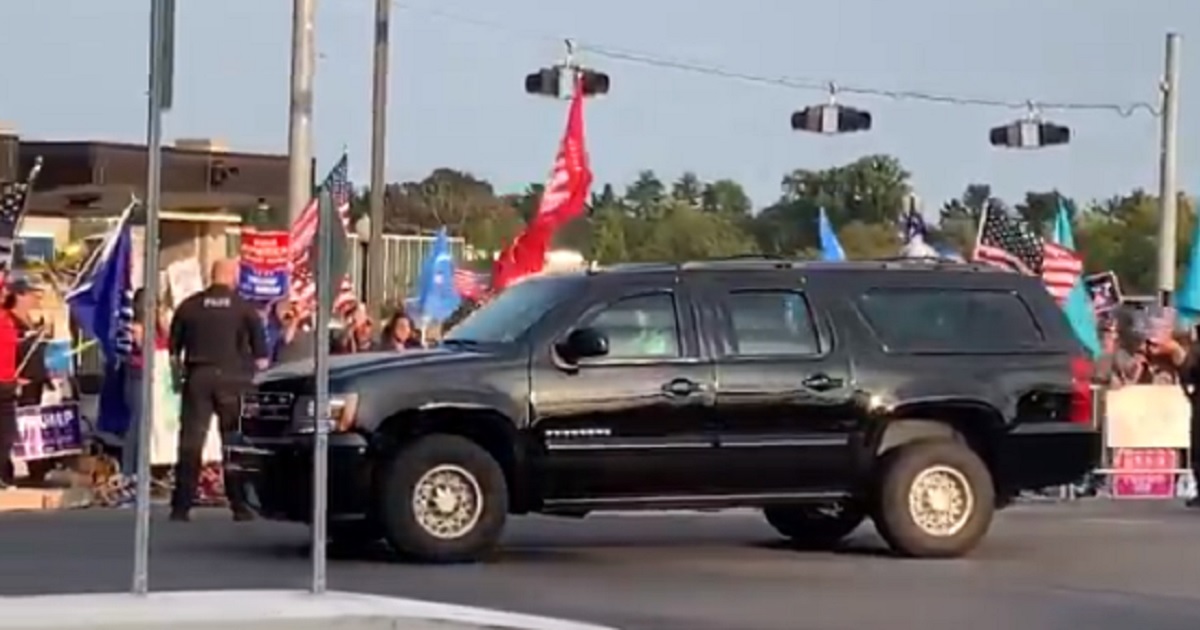 In a gesture that combined a Trump-sized “thank you” to his loyal supporters and a defiant gesture to his carping critics, President Donald Trump on Sunday waved to his fans outside Walter Reed National Military Medical Center from the back of an SUV as he slowly cruised past the throngs praying for him.

Trump wore a mask. Those with him in the vehicle also wore masks, video showed.

Trump drives by the press and supporters outside Walter Reed hospital. pic.twitter.com/3phtKthqTH

White House spokesman Judd Deere said Trump returned to the hospital after his “short, last-minute ride to wave to his supporters,” according to USA Today.

Trump had earlier tweeted his thanks to the many supporters to have been rallying and praying since Trump’s arrival at Walter Reed on Friday, the same day he and first lady Melania Trump were diagnosed with the coronavirus.

I really appreciate all of the fans and supporters outside of the hospital. The fact is, they really love our Country and are seeing how we are MAKING IT GREATER THAN EVER BEFORE!

“I really appreciate all of the fans and supporters outside of the hospital. The fact is, they really love our Country and are seeing how we are MAKING IT GREATER THAN EVER BEFORE!” Trump tweeted.

On Sunday evening, Trump released a short video on Twitter in which he hinted he was about to make a “little surprise visit” to his supporters outside.

“It’s been a very interesting journey, I learned a lot about COVID,” Trump said in the video.

“I learned it by really going to school. This is the real school. This isn’t the let’s-read-the-book school. And I get it, and I understand it,” he said.

Although Trump’s fans were thrilled at his venture outside the hospital, critics howled.

“By taking a joy ride outside Walter Reed the president is placing his Secret Service detail at grave risk,” he said, according to USA Today.

“In the hospital when we go into close contact with a COVID patient we dress in full PPE: Gown, gloves, N95, eye protection, hat.

“This is the height of irresponsibility.”

Does this show President Trump appreciates his supporters?

He told CNN’s Jake Tapper that Conley was being “purposefully misleading” and later added, “Well you know I’d have to say that they are hiding things, Jake. I mean, I hate to say it.”