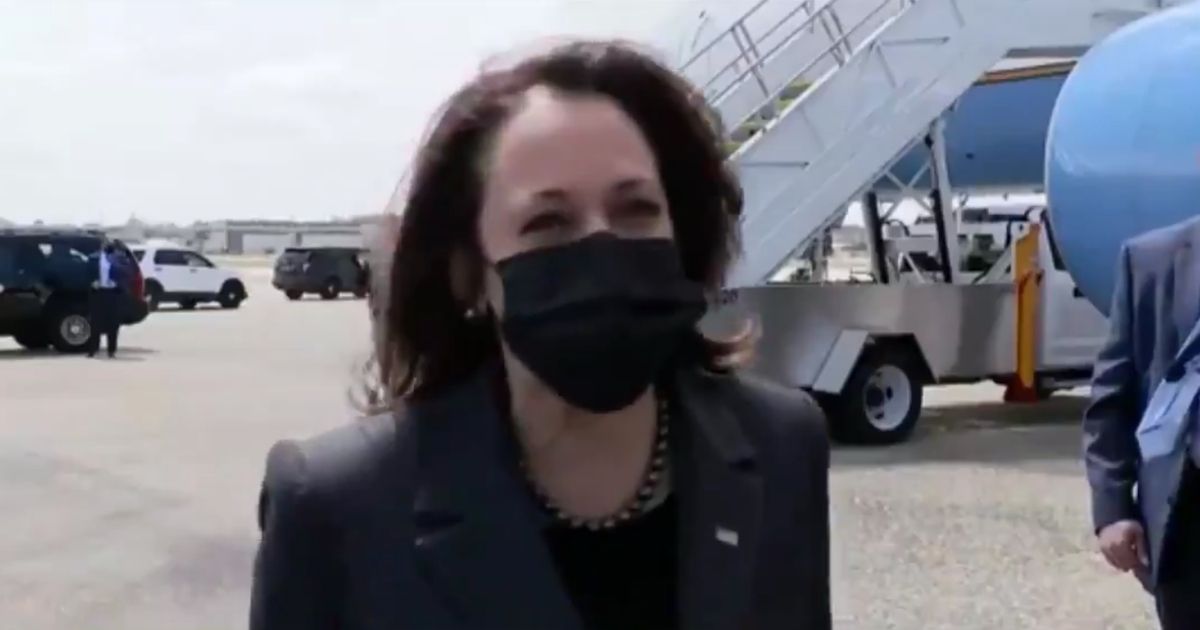 How did Kamala Harris end up as the vice president of the United States?

Seriously, do you ever wonder? What did she even have to offer to the Biden team besides her intersectional street cred?

I mean, let’s be real. There hasn’t been a single moment since Harris got shredded by Tulsi Gabbard during the Democratic primary debates when she has wowed or charmed anyone in this country other than having managed to show up as a minority woman on Inauguration Day.

This woman is an intersectional icon and certainly younger and more chipper than President Joe Biden, yet they keep her hidden away just about as much as they do the commander-in-chief.

Could it be, perhaps, that the presidency isn’t the only thing she’s threatening to steal from Biden but the title of “Gaffe Machine,” too?

You certainly have to imagine her handlers cringed on Monday when she was asked by reporters if she plans to visit the border, where a raging humanitarian crisis has manifested itself in the form of thousands of unaccompanied children packed into shelters — and she cackled.

The vice president of the United States was asked about the border crisis and actually cackled in the course of giving her mealy-mouthed reply, which did little to squash mounting questions from the American people as to what the administration has to say about the immigration disaster of its own making.

Apparently, the border crisis is now a laughing matter for the Biden administration.

WATCH: VP Kamala Harris laughs when asked if she has any plans to visit the border. pic.twitter.com/z3AdoFX0Dq

While visiting Jacksonville, Florida, to promote the distribution of the COVID-19 vaccine, the vice president was asked by a reporter if she had plans to visit the border.

Harris faltered for a moment, clearly pausing to calculate the most tactful response to a question on what has quickly become the Biden administration’s first big scandal.

She didn’t pause long, however.

Making the confounding choice to go for the quip, “Um, not today!” loudly and awkwardly, Harris then settled into a hearty laugh, the sound of which has become iconic for the history-making VP.

RELATED: Kamala Harris Bragged About Her Pot Use on National Airwaves, Will She Be the Next Person from the Biden Administration to Get the Boot?

In this particular case, however, the signature Kamala Cackle couldn’t have been more unsettling to hear.

As laughing loudly in response to a question indirectly involving tens of thousands of unaccompanied migrant children being housed in federal facilities was perhaps not the best choice, Harris then appeared to try to compose herself.

“But, um, I have before, and I’m sure I will again,” she concluded, nodding and adjusting her mask as she also tried to adjust back to a more stateswomanlike demeanor.

As you can imagine, the Twitterverse was far from forgiving of these terrible optics.

Laughing in response to kids being packed into jails like sardines is certainly one approach… pic.twitter.com/SVbFHt0TKh

If Mike Pence laughed about kids being in cages, CNN would demand his impeachment on the spot pic.twitter.com/6WRv7ix1Ne

While some pointed out that Harris was laughing at her own joke rather than at the situation at the border, that hardly helps matters much, as the joke was made sarcastically and defensively.

To heartily laugh as the reality hangs in the air that she’s just been asked about migrant children crowding federal detention centers is heartless and callous.

The timing of the incident was poor, as no doubt social media feeds on Monday were flooded both with Harris’ poorly timed cackle and several heart-wrenching images from facilities at the southern border released the same day:

Photos taken by a member of Congress reveal the crowded conditions unaccompanied immigrant kids are held in at the border https://t.co/HK3193WkU9 pic.twitter.com/QXmjqOt86G

The Biden administration has much to answer for when it comes to the border situation it has created, so much so that even the overwhelmingly friendly establishment media is growing agitated with the lack of answers.

But all Harris can do is laugh?

So tell me again: Why did Biden pick her?