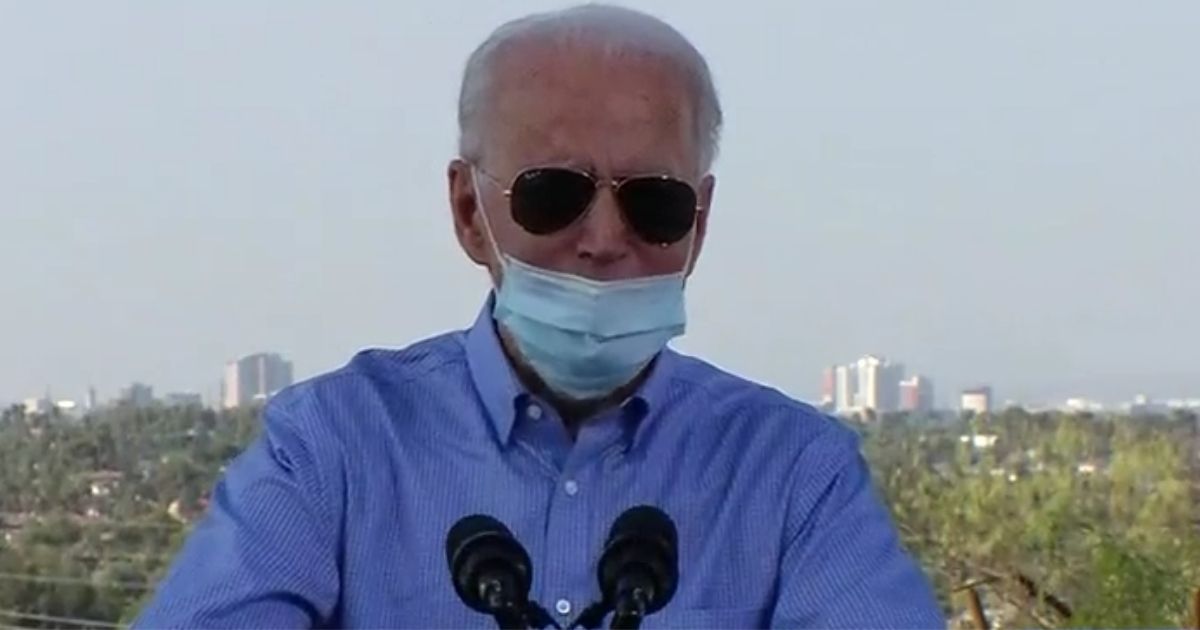 In what many Americans saw as an example of “do what I say and not what I do,” Democratic presidential nominee Joe Biden flouted Centers for Disease Control and Prevention rules Friday when he needed to cough in public.

Biden, who has expressed support for a national mask mandate, appeared in Las Vegas at a campaign event Friday. During the event, he had to cough.

As shown on a viral video clip, Biden lowered the mask he was wearing and coughed into his hand.

Biden then used the hand into which he had just coughed to put his mask back in place:

You can’t make this up.

Joe Biden just removed his mask to cough in his hand.

“Cover your mouth and nose with a tissue when you cough or sneeze or use the inside of your elbow,” the CDC’s website reads.

Masks should be washed regularly. Always remove masks correctly and wash your hands after handling or touching a used mask.

For more information about how to properly clean masks, check out this resource from @CDCgov https://t.co/AjpVbDJOAA pic.twitter.com/6O9YQLH4OL

Biden, at a “drive-in” campaign event in Nevada, calls Pres. Trump “reckless” as Biden coughs into his hand, coughs into a mask that keeps sliding down his face, and stumbles over numbers, mentioning a $15 million dollar.. thousand dollar… minimum wage.

You realize the Fake News would call for public execution if @realDonaldTrump took his mask to cough. With or without C19.

They Fake News Media (aka Biden/Harris campaign) won’t call out @JoeBiden on this or anything else pic.twitter.com/DKf9sj9DQW

The whole point of the mask is to try and minimize the spread of virus carrying droplets into the air. By taking his mask off and coughing he is basically invalidating the mask, apart from of course spreading mucous yo his hands and everything it touches https://t.co/dvFjWEwMSV

Second graders know to cough into their elbow!

Wait, either he & his disciples “believe in science” or they don’t. The advice for coughs has been without equivocation: cough into a tissue (and discard), or cough into your elbow. How is this acceptable? Or is this more “rules for thee, but not for me” from the ruling class?

This was not the first time that Biden, who has made wearing a mask and following CDC guidelines in lockstep a centerpiece of his campaign, has decided he can be an exception to the rules.

In March, during his debate with Sen. Bernie Sanders of Vermont, Biden coughed at the start of the debate and put his hand to his face as he did so.

Biden also flouted the guidelines in a virtual CNN interview, and was gently reminded by CNN’s Jake Tapper to do better next time.

Is Joe Biden a hypocrite?

CNN’s Jake Tapper just had to show Joe Biden how to properly cough during their interview. pic.twitter.com/SdA7Be69TW

“You know, you’re supposed to cough into your elbow,” Tapper said. “I learned that, actually, covering your White House.”

“It’s kinda just old school to do it with your hand. Do it into your elbow. You’re supposed to do it,” Tapper persisted.