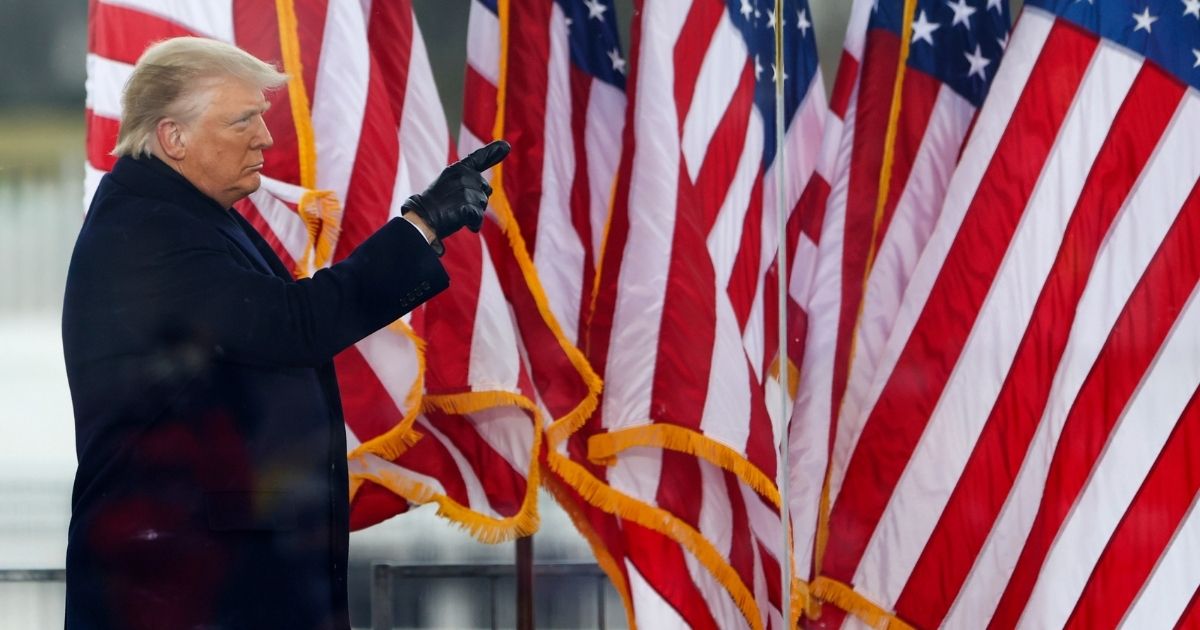 Twitter permanently banned the sitting president of the United States of America on Friday amid a broader Big Tech purge targeting conservatives, yet tweets from an actual terrorist and the communist Chinese regime were allowed to remain to spread propaganda on the platform.

President Donald Trump was censored for 12 hours in the days following the incursion at the Capitol on Wednesday, but the writing was on the wall when Facebook and Instagram followed suit. Those platforms signaled the president might not be back.

Twitter acted first Friday with a permanent ban, actually justifying the death of free speech by blaming Trump for tweeting that he would not be attending Joe Biden’s inauguration. This is arguably an assault on freedom of expression, as tech oligarchs are working in tandem with Democrats to silence dissent.

Sen. Lindsey Graham or someone like him will probably put an angry letter in the mail going somewhere, but it’s clear the GOP doesn’t care about censorship. The party’s elites don’t care about us. They let Big Tech cross the Rubicon.

“To all of those who have asked, I will not be going to the Inauguration on January 20th,” one of those tweets read. Twitter said that the post was potentially dangerous.

After close review of recent Tweets from the @realDonaldTrump account and the context around them we have permanently suspended the account due to the risk of further incitement of violence.https://t.co/CBpE1I6j8Y

“President Trump’s statement that he will not be attending the Inauguration is being received by a number of his supporters as further confirmation that the election was not legitimate and is seen as him disavowing his previous claim made via two Tweets (1, 2) by his Deputy Chief of Staff, Dan Scavino, that there would be an ‘orderly transition’ on January 20th,” the company said.

Do you think social media monopolies such as Twitter should be regulated?

OK, so not attending Biden’s big party is a “glorification of violence” (Twitter’s words, not mine) but a tweet Thursday from the Chinese Embassy in the U.S. Twitter account that painted Uighur concentration camps as a victory for women was up for a day and Twitter was initially cool with it.

“Study shows that in the process of eradicating extremism, the minds of Uygur women in Xinjiang were emancipated and gender equality and reproductive health were promoted, making them no longer baby-making machines. They are more confident and independent,” the account tweeted.

The tweet drew outrage, but it did not violate any terms of service until late Friday night, when Twitter finally took it down. But it sat up for about a day as a symbol of the contempt Silicon Valley has for America and conservatives. The account is still active.

Then there are these recent tweets from Iran’s supreme leader, Ayatollah Sayyid Ali Hosseini Khamenei — one of which actually prods the current unrest in the US — which were still up as of the writing of this article.

The US openly says its interests require instability in this region. The US wanted to start a civil war in #Iran in 2009, & now God has afflicted them with the same predicament in 2021. The recent chaos reached a point where #Congress members had to escape through secret tunnels.

I thank God & the dear people of our country for their epic movement in commemorating the anniversary of the martyrdoms of dear #Soleimani & #AbuMahdi. I also sincerely thank the #Iraqi brothers & sisters for their massive, stunning turnout in honoring these martyrs.

This one seems to be a threat to actually kill the president:

Those who ordered the murder of General Soleimani as well as those who carried this out should be punished. This revenge will certainly happen at the right time.

Those tweets are fine, yet, “I will not be going to the Inauguration on January 20th,” when said by Trump, was an incitement of violence?

Twitter crossed another line on Friday night, though, when it censored posts from Trump which came from the official @POTUS government Twitter account and hinted at possibly building a new platform for free expression.

“As I have been saying for a long time, Twitter has gone further and further in banning free speech, and tonight, Twitter employees have coordinated with the Democrats and the Radical Left in removing my account from their platform, to silence me — and YOU, the 75,000,000 great patriots who voted for me,” Trump tweeted. “Twitter may be a private company, but without the government’s gift of Section 230 they would not exist for long.”

The tweets were deleted within a matter of minutes, but then Twitter CEO Jack Dorsey and his geeks went a step further. They suspended the Trump campaign’s “Team Trump” page after Trump tried to use that account to send the same messages.

They banned @teamtrump too? pic.twitter.com/nvLc7Cwn8u

President Trump is now banned from speaking to the American people on an American platform which allows foreign hate accounts to spread propaganda. One of either of those countries could attack us, and the president might not even be able to speak out about it, depending on whether the establishment media decided to join Big Tech in censoring him as well.

This is now a national security situation, with a handful of billionaires in California preventing the American people from being able to hear from their president, yet we’re told Trump is the one guilty of attempting a coup.

Twitter failed if it intended to neutralize him, though.

In silencing the president, the script has flipped. After Wednesday, Trump was the media’s public enemy no. 1 — again — after he was blamed for the Capitol violence. Following the unprecedented censorship Friday, Trump is now the singular figure representing a resistance to tyranny and a refusal to conform to the authoritarian left.

Twitter also set a new standard: If the company is going to exile an American president, it had better be ready to explain and justify why the leaders of authoritarian regimes like China and Iran are still allowed to have a voice on the platform.