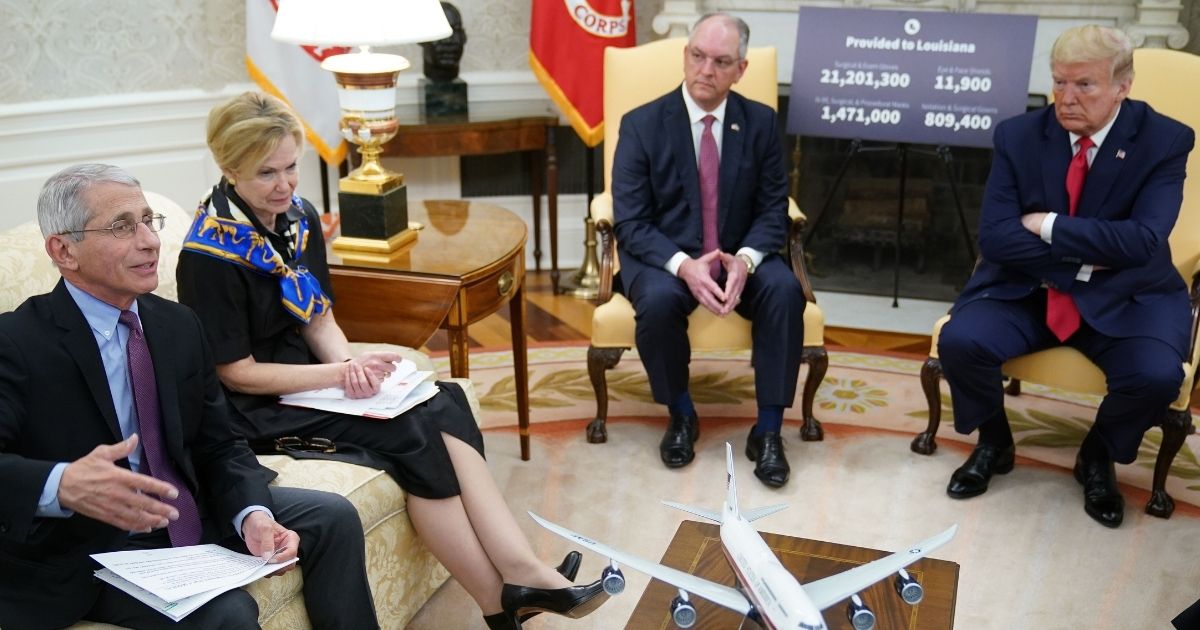 Former President Donald Trump responded to both Dr. Anthony Fauci’s and Dr. Deborah Birx’s recent critiques of his handling of the COVID-19 pandemic, saying if he’d followed their “bad instincts” the country would be in an economic depression with no approved vaccine.

Trump also took the opportunity to poke fun at Fauci’s lack of athletic prowess as evidenced by the infectious disease expert’s first pitch at a Washington Nationals game last summer.

“Based on their interviews, I felt it was time to speak up about Dr. Fauci and Dr. Birx, two self-promoters trying to reinvent history to cover for their bad instincts and faulty recommendations, which I fortunately almost always overturned,” the former president said in a Monday statement.

“They had bad policy decisions that would have left our country open to China and others, closed to reopening our economy, and years away from an approved vaccine — putting millions of lives at risk,” Trump continued.

In a CNN documentary that aired Sunday, Birx suggested hundreds of thousands of deaths due to the coronavirus outbreak could have been prevented.

As of Sunday, approximately 550,000 Americans were reported by the states to have died from COVID-19.

Do you think Trump’s instincts regarding a COVID response were better than Fauci’s?

“I look at it this way,” Birx told CNN. “The first time, we have an excuse. There were about 100,000 deaths that came from that original surge” in the spring.

“All of the rest of them,” she argued, referring to about 450,000 deaths, “in my mind, could have been mitigated or decreased substantially.”

She also said the projections by Fauci that U.S. deaths “could range from 1.6 million to 2.2 million is a worst-case scenario if the country did ‘nothing’ to contain the outbreak,” according to the news outlet.

Birx further claimed in the CNN documentary that she received a “very uncomfortable” and “very difficult” phone call from Donald Trump after appearing on CNN to talk about the spread of the virus.

“It was a CNN report in August that got horrible pushback. That was a very difficult time, because everybody in the White House was upset with that interview and the clarity that I brought about the epidemic,” Birx told CNN.

“I got called by the president,” she said. “It was very uncomfortable, very direct and very difficult to hear.”

In response to Birx’s remarks, Trump chief of staff Mark Meadows said, “I can tell you about the ‘uncomfortable’ phone call,” according to the New York Post.

“It had to do with the fact that Deborah Birx started talking about keeping schools closed and remote learning. And that was what it was all about because that was not based on science,” he said.

The Post reported that Fauci criticized Trump in the CNN documentary for tweeting in April 2020 that states should be liberated from the COVID-19 lockdowns.

“That hit me like a punch to the chest,” Fauci said.

In his Monday statement, Trump hit Fauci for taking credit for the vaccine and poked fun at his opening pitch in July at the Nationals season opener against the New York Yankees.

Dr. Anthony Fauci threw out the first pitch before the Nationals-Yankees game. pic.twitter.com/04Tbkh7Voa

“In a fake interview last night on CNN, Dr. Fauci, who said he was an athlete in college but couldn’t throw a baseball even close to home plate, it was a ‘roller,’ tried to take credit for the vaccine, when in fact he said it would take three to five years, and probably longer, to have it approved,” Trump said.

“Dr. Fauci was incapable of pressing the FDA to move it through faster. I was the one to get it done, and even the fake news media knows and reports this.”

Trump also pointed out that in the spring of 2020 Fauci said Americans did not have to wear masks and opposed the president shutting down travel from China and other overseas locations experiencing severe COVID-19 outbreaks.

Regarding Birx, Trump contended, “The States who followed her lead, like California, had worse outcomes on Covid, and ruined the lives of countless children because they couldn’t go to school, ruined many businesses, and an untold number of Americans who were killed by the lockdowns themselves.”

The former president also said, “There was no ‘very difficult’ phone call, other than Dr. Birx’s policies that would have led us directly into a COVID caused depression.

“She was a very negative voice who didn’t have the right answers. Time has proven me correct.”

Looking back, Trump’s instincts to keep the country more or less open with mitigation strategies in place (social distancing, masks, etc.), on balance, were proven correct.

GOP Gov. Ron DeSantis of Florida followed this path while protecting the most vulnerable and experienced essentially the same death rate per 100,000 residents as California, which implemented severe lockdowns.

Both ranked better than over half of the states overall, but California’s unemployment rate remains among the highest in the country at 8.5 percent, while Florida’s 4.7 percent beats the national average of 6.2 percent.