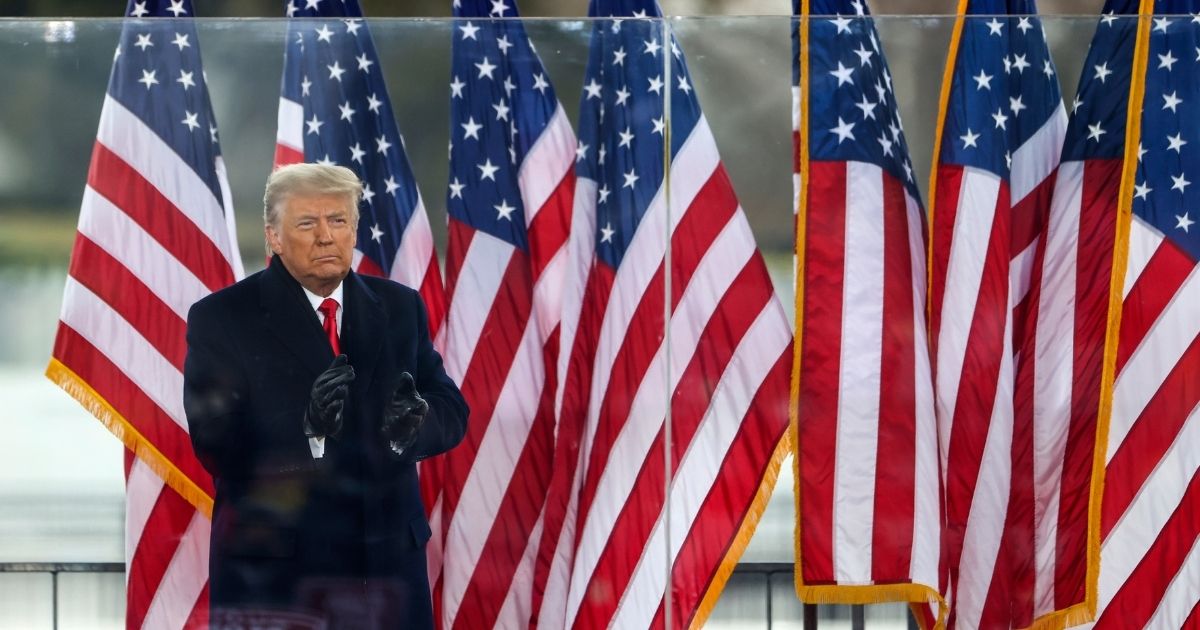 President Donald Trump on Thursday affirmed that there will be an orderly transition of power to President-elect Joe Biden.

A statement from Trump tweeted by White House Deputy Chief of Staff for Communications and Director of Social Media Dan Scavino came following unprecedented scenes of a disorderly mob running amok in the U.S. Capitol after a “Stop the Steal” protest morphed into a wild riot that surged through the Capitol Building, forcing a lockdown and triggering gunfire.

“Even though I totally disagree with the outcome of the election, and the facts bear me out, nevertheless there will be an orderly transition on January 20th,” the tweeted statement read.

“I have always said we would continue our fight to ensure that only legal votes were counted. While this represents the end of the greatest first term in presidential history, it’s only the beginning of our fight to Make America Great Again!”

…fight to ensure that only legal votes were counted. While this represents the end of the greatest first term in presidential history, it’s only the beginning of our fight to Make America Great Again!”

Trump’s statement also came after Congress certified the results of the Electoral College vote that gave Biden the presidency.

The certification vote had been a contentious debate between those who claimed the election was marred by misconduct and those who attacked such claims until the rioting led to the process being suspended Wednesday afternoon.

By the time the certification resumed late Wednesday, after the Capitol had been secured in the aftermath of the rioting, many said it was simply time to move on. That spirit was summed up in comments from Trump supporter Sen. Lindsey Graham, according to NBC News.

“All I can say is count me out. Enough is enough,” the South Carolina Republican said in a floor speech.

“Final thing: Joe Biden. I’ve traveled the world with Joe. I hoped he’d lose. I prayed he would lose. He won. He is the legitimate president of the United States,” Graham said.

“I cannot convince people, certain groups, by my words, but I will tell you by my actions, that maybe I — among, above all others in this body — need to say this: Joe Biden and Kamala Harris are lawfully elected and will become the president and the vice president of the United States on January the 20th,” he added.

Republican Sen. Kelly Loeffler of Georgia, who lost a runoff election Tuesday and will be leaving the Senate, said that in a few hours of chaos, coupled with elections that have handed Democrats the reins of power, the political world had changed.

“When I arrived in Washington this morning, I fully intended to object to the certification of the electoral votes,” Loeffler said.

“However, the events that have transpired today have forced me to reconsider. I cannot now in good conscience object to the certification of these electors. The violence, the lawlessness and siege of the halls of Congress are abhorrent and stand as a direct attack on the very institution my objection was intended to protect: the sanctity of the American democratic process,” she said, while still insisting there were “serious irregularities” in the election.

Trump had said in September that he would support what he called a “smooth, beautiful transition” if he lost the election, but linked that to being defeated in “an honest vote.”

Near the close of Trump’s Wednesday speech that came before the protests turned violent, he told supporters that the end had not yet arrived.

“Our exciting adventures and boldest endeavors have not yet begun. My fellow Americans for our movement, for our children and for our beloved country and I say this, despite all that’s happened, the best is yet to come,” Trump said.