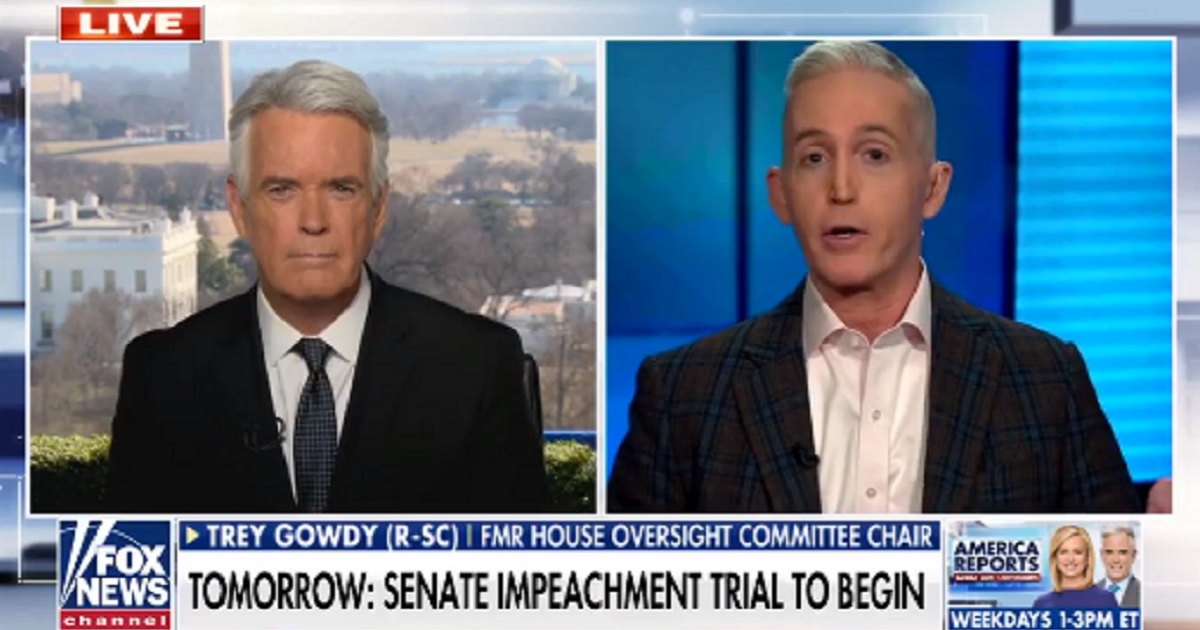 No one who watched former Rep. Trey Gowdy’s congressional career can doubt he has a way with words when it comes to attacking Democrats.

But this time, his choice was perfect.

On the eve of Donald Trump’s second impeachment trial before the United States Senate, Gowdy summed up the proceedings in a damning description:

“They picked the dumbest of all impeachment articles,” Gowdy told Fox News’ “America Reports” on Monday.

Democrats are charging the former president with “incitement of insurrection” – an ambiguous phrase at best – for the speech Trump gave supporters on Jan. 6 as Congress prepared to certify the Electoral College vote that made Joe Biden the 46th president of the United States.

That certification was interrupted by the now-notorious Capitol incursion, in which a mob of mainly Trump supporters swarmed past Capitol Police officers and into the building itself, forcing lawmakers to suspend proceedings until order was restored.

No one’s denying Trump’s speech was passionate or powerful. As a man who’s lived his life in the public eye for decades, he developed a talent for showmanship that stood him in good stead in politics as well as entertainment.

But painting normal terms of American political discourse as inherently dangerous, as an “incitement” to rebellion against the government itself, is taking the argument impossibly far.

“I think the Democrats, in their haste to impeach this president for the second time, picked the weakest of their arguments,” Gowdy told host John Roberts.

“I’m not suggesting they would’ve been successful on another argument, but a much better argument is, ‘OK, you were surprised the siege took place, what did you do when you learned it was happening?’” Gowdy said. “That’s the better impeachment article… What did the president do once the siege began?”

Note that Gowdy wasn’t saying there is any argument that’s strong enough to secure the two-thirds Senate vote necessary to convict Trump and get him barred from running for federal office again. But as a former federal prosecutor who’s actually weighed criminal charges against potential defendants, Gowdy was delivering an opinion on the merits of the argument Democrats chose.

And the verdict was unmistakable.

Gowdy was apparently referring to House Speaker Nancy Pelosi’s weekly news conference on Thursday, where, according to CNS News, she was asked why an impeachment is going forward when “all signs point to acquittal” in a Senate where Republicans hold 50 seats, and 17 are unlikely to cross party lines to convict the former president.

RELATED: Flashback: By Dems’ Standards, Should Kamala Be Impeached for What She Said About Trump Dying?

Pelosi intimated that it will be up to the nine House impeachment managers to change that.

Yes, well, in the court of the Senate, the case has already been all but dead since Jan. 26, when 44 fellow Republicans supported Kentucky Sen. Rand Paul in a procedural move that called the impeachment of a former president unconstitutional in the first place.

Do you think Trump’s impeachment is unconstitutional?

It will be tough to get a two-thirds conviction when almost half the jury doesn’t think the trial should even be taking place.

And as to the court of public opinion, Americans are not a stupid people. They’ve watched for more than four years as the Democratic Party abandoned its legitimate role of loyal opposition to devote itself to becoming a #Resistance bent on destroying the Trump presidency.

They’ve watched for years as Democratic politicians like California Rep. Maxine Waters and now-Senate Majority Leader Chuck Schumer of New York routinely used inflammatory language about Trump, his supporters and his appointees without the liberal establishment batting an eye.

And now Democrats expect Americans to believe that an impeachment conviction for “incitement of insurrection” is warranted against former President Trump because he called on his followers to “fight” for their beliefs while at the same time specifically exhorting them to behave “peacefully and patriotically”?

It’s worth acknowledging here that in a political life spent battling Democrats, “dumbest” is an adjective Gowdy uses fairly often. (That says a lot about his opponents.)

But repetition, in this case, doesn’t dampen the effect.

Of all the lines of attack Democrats have deployed since Trump entered the political arena – including the last sham impeachment trial — this one really is the dumbest.

And Trey Gowdy described it perfectly.