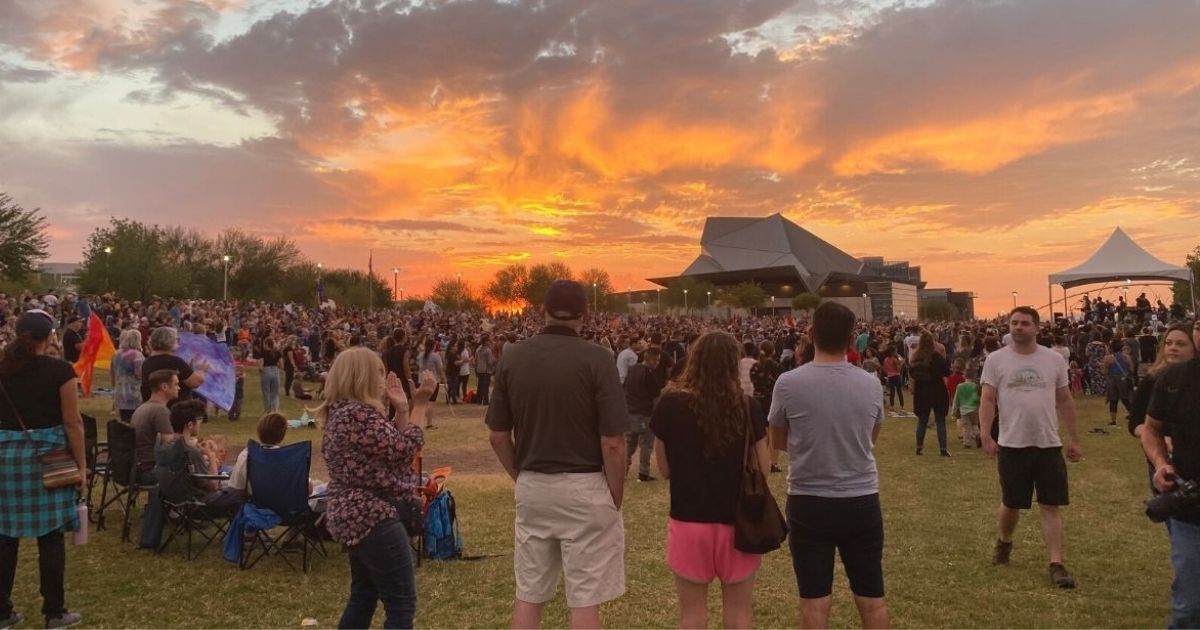 “Let Us Worship” leader Sean Feucht brought his joyful message of hope in Jesus Christ to the Phoenix metropolitan area Sunday night, capping off a pre-election 47-city tour that took him from coast-to-coast.

“I want to declare to you out there, this is a revival season in America!” Feucht told the crowd of thousands gathered at Tempe Beach Park near the campus of Arizona State University.

“We’re seeing it in every city we go to. No place is too hard,” he added, noting they even held powerful events in Portland and Seattle, in the midst of the cities being besieged by Antifa and other left-wing agitators.

“And I just want to declare only a united church can heal a divided nation,” Feucht said.

The whole Let Us Worship phenomenon began back in July when Feucht felt led by God to do something in response to the oppressive COVID lockdowns in his home state of California.

Over 10,000 rowdy worshippers filled a park outside Phoenix to lift up the name of Jesus!!!

So many salvations, healings, miracles and FAITH released!!!!

“You know the pandemic hit, the churches shut down, and I’m in California and things just got crazy,” Feucht said. “It’s like they wouldn’t let you breathe or go anywhere.”

“And the Lord was just stirring this thing in me, at the time when everyone’s trying to get us to be quiet, it’s actually the time we need to lift our voice,” he continued.

Do you believe the U.S is on the precipice of another Christian awakening?

Churches are still not allowed to meet indoors in much of the state, and even in counties where they can, it is limited to 100 to 200 people, based on a four-tier system established by Democratic Gov. Gavin Newsom’s administration.

In July, Feucht, who’s from Redding in northern California, decided to travel to San Francisco to hold an outdoor worship event at the Golden Gate Bridge.

The worship leader recounted that at that time, police told him they were riding bike patrol on the bridge on suicide watch, which they had been doing consistently for the previous 30 days.

In fact, there have been times during the pandemic, Feucht said, when more people were dying from suicide than the coronavirus.

The Christian and his team prayed and prophesied over the police officers, who became emotional at their act of love, kindness and support.

RELATED: Businesses Around the Country Board Up Windows in Calm Before Election Storm

“I felt the Lord gave us an assignment in worship,” Feucht said. “That the assignment was to break off the spirit of death and disappointment and discouragement.”

Hundreds from all races and backgrounds attended the first of what became the Let Us Worship gatherings, which Feucht sees as being in the spirit of the Jesus Movement of the late 1960s and early 1970s.

That movement, which sprang up among the hippie counterculture in California, spread nationwide and birthed many great churches such as Calvary Chapel and saw hundreds of thousands experience Christian conversions.

At Sunday’s event in Tempe, hundreds lifted their hands to receive Jesus Christ as their savior at Feucht’s invitation, according to Michael Maiden, pastor of Church for the Nations in Phoenix, which sponsored the evening.

“We’re honored that on this night, just before the election, that God chose Phoenix to be kind of a last stop on Sean’s 47-city tour,” he told The Western Journal.

“And we’re happy that many thousands, maybe 10,000, came out tonight, a great crowd. And we believe it signifies the spiritual hunger in this region, the passion for the things of God,” Maiden added.

#LetUsWorship #Phoenix with ⁦@seanfeucht⁩ has drawn thousands for a night of joyful praise to #God. #Jesus pic.twitter.com/KTkGRQCSDS

Kaleo Cockett, who attended the event, said she was amazed at the turnout.

“I wasn’t expecting so many people,” Cockett said. “And the fact that everybody was coming together, bringing joy during this time, not only with COVID, but with the election, you know, and everybody doing their own thing.

“I just felt it was very powerful, the way everybody can come together. And everybody was just rejoicing and giving the glory to God.”

Cockett also was impressed with the number of people who chose to get baptized right on the spot.

“They were still being people being baptized” when the worship part of the evening ended, she pointed out. “That was, to me, amazing.”

Maiden estimated that 100 or more were baptized. Others expressed from the stage being healed of various physical maladies during prayer at the event and another testified how God freed her from prostitution and the shame she had in her heart from it.

Maiden shares Feucht’s view that revival is about to break out in America.

“It’s a breakthrough time. It’s revival time,” Maiden said. “It’s a renewal time for our country. We’re right on the precipice of the greatest revival, the greatest awakening America’s ever had.”

Feucht travels to New Orleans next and plans to host a New Year’s Eve Worship party in Los Angeles, at Azusa Street, the site where a major Christian revival launched in the early 1900s.