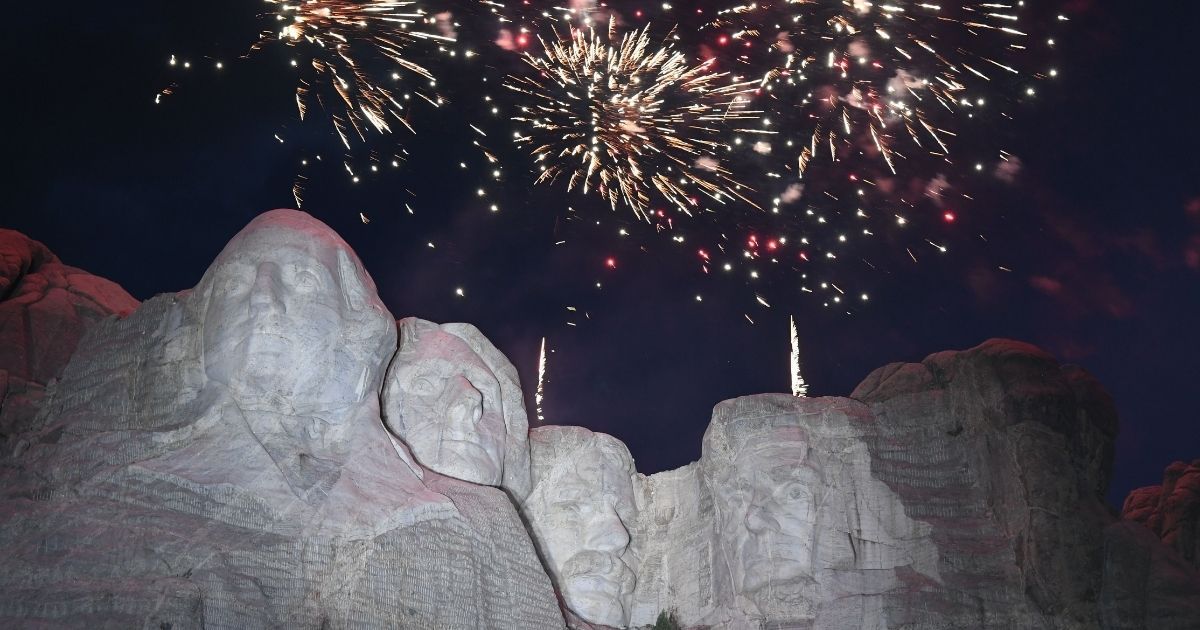 What it means to be an American is a front-and-center issue these days.

President Joe Biden and many Democrats seem most focused on the alleged existence of systemic racism in the country, while traditionalists, conservatives and Trump supporters tend to see America as not perfect, but certainly a nation with a noble history in the cause of advancing human liberty and worthy of celebrating.

On Sunday, Biden signed an executive order focused in part on combating the “scourge of systemic racism” and the “profound polarization” in the U.S.

Meanwhile, Rep. Sheila Jackson Lee of Texas will chair a hearing Wednesday to consider H.R. 40, which is legislation she introduced aimed at establishing a “commission to study and consider a national apology and proposal for reparations for the institution of slavery.”

Its purpose is “to address the fundamental injustice, cruelty, brutality, and inhumanity of slavery in the United States and the 13 American colonies between 1619 and 1865.”

Both these actions indicate the Democratic Party has bought in — lock, stock and barrel — to the 1619 Project way of thinking about America.

It posits that our country should be defined by the moral failure of the introduction of slavery into the British colony of Virginia in 1619, rather than the unleashing of liberty that happened on July 4, 1776.

In the latter, traditional way of thinking, the Declaration of Independence and the Constitution define what it means to be an American.

Do you support reparations for African-Americans?

“We hold these truths to be self-evident, that all men are created equal, that they are endowed by their Creator with certain unalienable Rights, that among these are Life, Liberty and the pursuit of Happiness,” the Declaration says.

“That to secure these rights, Governments are instituted among Men, deriving their just powers from the consent of the governed.”

While the Declaration is the founding charter of the American experiment in liberty, the Constitution serves as its bylaws, giving a structure to how God-given rights would be secured.

The Constitution’s preamble states, “We the People of the United States, in Order to form a more perfect Union, establish Justice, insure domestic Tranquility, provide for the common defense, promote the general Welfare, and secure the Blessings of Liberty to ourselves and our Posterity, do ordain and establish this Constitution for the United States of America.”

Did you catch that? A “more perfect” union.

This side of heaven, we will never have a perfect government, given the imperfection of man.

So what was the state of play in the world in the late 1700s in terms of human freedom and self-rule when the United States was founded?

Pretty much zippo. Most nations were governed by monarchs, czars, emperors or tribal chiefs. Great Britain divided power between the king and Parliament.

Slavery existed on all the inhabited continents on the globe. It was legal in the entire British Empire, on which “the sun never set.”

Britain would not abolish slavery until 1833, over 50 years after the American colonies declared their independence.

Perhaps Democrats need to be reminded that the first blows against slavery came in the United States, when the Northern states began outlawing the institution during and in the years immediately following the Revolutionary War.

By 1804, all of them had passed legislation ending slavery.

Further, in 1787, the Continental Congress passed the Northwest Ordinance barring the introduction of slavery into the territory that would become the states of Ohio, Michigan, Indiana, Illinois and Wisconsin.

The Constitution specifically authorized the federal government to ban the importation of slaves in 1808 (approximately 20 years from the date the document was ratified).

Congress, in fact, passed the legislation in 1807 because the lawmakers wanted the ban to take effect at the soonest possible date, Jan. 1, 1808. President Thomas Jefferson signed the bill into law.

All this works against the leftist narrative about the evil, slavery-loving Founders.

In an ideal world, they would have ended the institution outright, but they would not have been able to form the union had they done that.

Both Jefferson and George Washington expressed their desire to see slavery abolished, but there simply were not enough votes, particularly in the Southern states, to end an institution that had been in the world for millennia.

Ultimately, Abraham Lincoln and the North would oversee the demise of slavery on American soil during the Civil War in the 1860s.

The Republican-controlled Congress then passed the three post-Civil War amendments outlawing slavery, guaranteeing equal protection under the law and securing the right to vote for African-Americans.

Lincoln, whose statues have recently been vandalized or removed in cities like Boston, gave his very life in the cause of freeing the slaves.

Assassin John Wilkes Booth famously pronounced after hearing Lincoln speak of black people being given the right to vote in April 1865, “That means n—-r citizenship. That is the last speech he will ever make.” Booth shot him three days later.

Lincoln was not alone. Hundreds of thousands of Northern soldiers gave their lives in securing the God-given right of liberty for African-Americans.

The United States was not a perfect union after the Civil War, but it was much closer to that ideal.

Another blow in the cause of freedom would be struck in the 1950s when the Supreme Court ruled in Brown v. Board of Education that separate was not equal in the classroom.

President Dwight Eisenhower then sent the 101st Airborne into Little Rock, Arkansas, to enforce the decree when that state’s governor refused to integrate the school system.

The Kennedy administration that followed would take similar action in Alabama and Mississippi regarding the integration of colleges in the 1960s.

Did all these actions create a perfect union? No, but we were closer. These were not the acts of a country committed to systemic racism.

The entire history of the U.S. has been the advance toward equality under the law and an equal chance at living out the American dream.

There has never been a more diverse nation in the history of the world, and despite our many differences, we have been able to unite around this core belief that the Founders had it right. “We hold these truths to be self-evident…”

We are all the beneficiaries of the Founders’ boldness and vision to create a nation grounded in liberty.

Rather than denigrating our history and always focusing on when we have come up short, how about when we got it right, which has been often?

Randy DeSoto is the author of “We Hold These Truths,” which examines the influence of the Declaration of Independence throughout U.S. history.