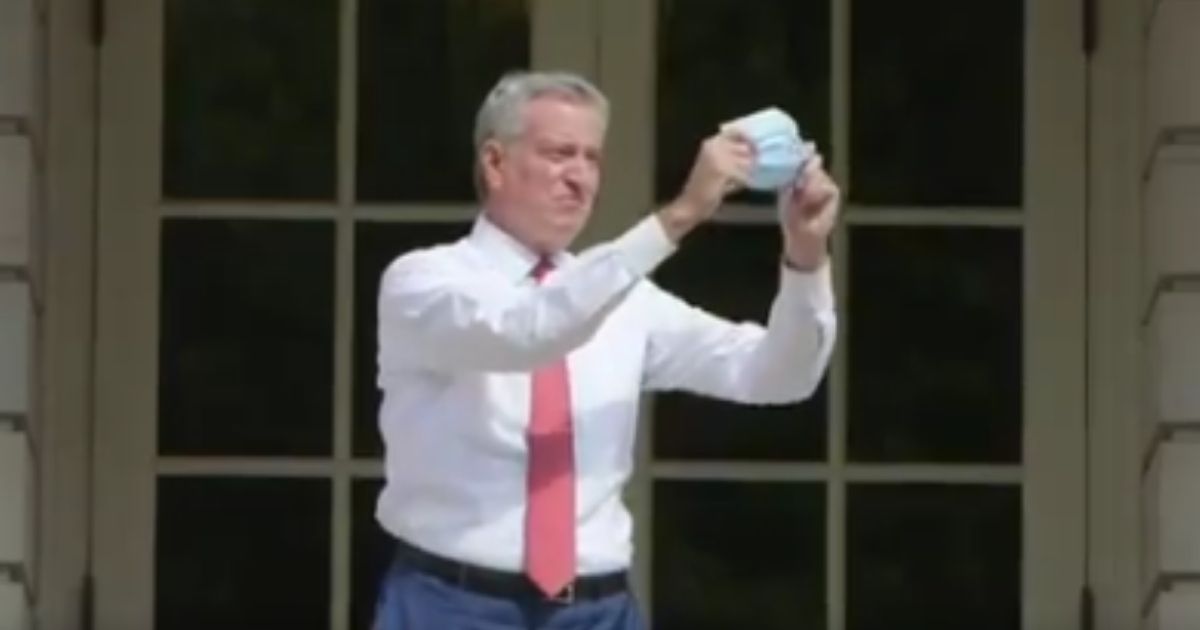 Sen. Ted Cruz of Texas couldn’t help but poke fun at an online video stunt where New York Mayor Bill de Blasio portrayed himself as heroic and virtuous for wearing a mask this week.

In New York, where de Blasio and Gov. Andrew Cuomo are the epitome of failed governance, the second-term, worst mayor in the modern history of the country’s largest city posted a video that seemed like a knock against President Donald Trump.

Empire State Democrats apparently hope to turn the focus on their disastrous coronavirus and law enforcement policies around to the president.

So, in a 21-second video, de Blasio was seen standing on a balcony outdoors, dramatically displaying a surgical mask and then putting it on.

This all occurred as inspirational orchestral music played in the background.

“In New York City we wear our masks, proudly,” the tweet accompanying the video said.

In New York City we wear our masks, proudly. pic.twitter.com/YTZDGu2pzG

De Blasio’s wearing a mask for the camera probably didn’t make anyone forget about the thousands of elderly and sick New Yorkers who died from the coronavirus after the state’s government pushed COVID-19 patients into nursing homes.

But it did welcome a lot of well-earned mockery, some of which came from Cruz.

The Texas Republican had some appropriate commentary for the publicity stunt.

“Wait…at the start of this video…he has no mask,” he wrote. “On a balcony. Outside.

“Clearly, DeBlasio wants to kill everyone.”

On a balcony. Outside.

Cruz had a good point.

The video and its placing, outdoors on a balcony, obviously was a veiled shot at Trump.

On Monday, when the president returned to the White House after three days at Walter Reed National Military Medical Center, he walked up the South Portico steps and, once on the White House balcony, removed his mask and saluted those aboard Marine One. The move drew criticism from many on the left.

First thing Trump does when he gets to the White House? Takes his mask off. pic.twitter.com/sQFyL3CMTl

In Washington, the knives are always out.

Trump’s coronavirus diagnosis led to widespread speculation that he was incapacitated in D.C. and in the establishment news media.

He showed them and a world full of bad actors that America’s president was alert, agile and unafraid.

The moment on the balcony was quite dramatic, but it was arguably needed to dispel the rumors being circulated by the country’s enemies inside and outside of the country.

Do you think de Blasio is a hypocrite?

On the other hand, de Blasio’s video was a cynical, juvenile stunt that not one single person was better off after having seen.

To top it off, as the always astute and hilarious Cruz pointed out, the moment of mask theatrics was a flagrant display of duality.

Per the logic of some leftists, including New York’s failed mayor, even appearing outside momentarily without a mask is an example of homicidal behavior and narcissism.

When you rail against the supposedly dangerous actions of your citizens, as de Blasio has, and then do the same thing, you can expect to get called out for it.

That is especially true when your behavior is coated in multiple layers of hypocrisy.