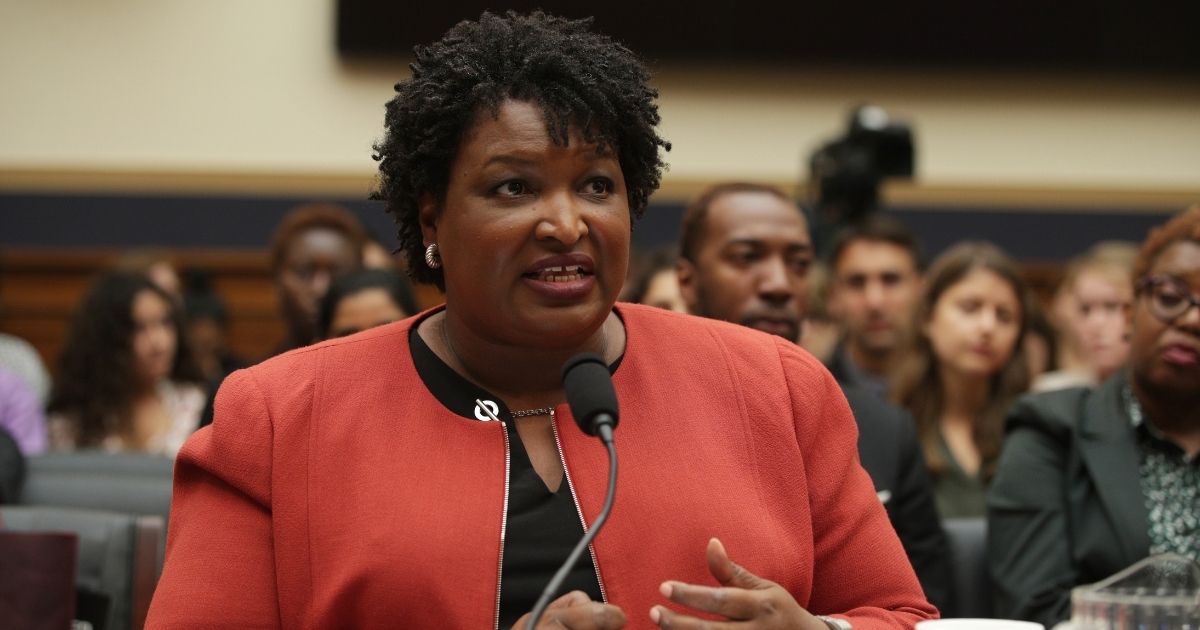 Voter identification laws are always racist, except when they’re not.

The legislation being scrutinized was enacted to secure the election process by preventing ballot harvesting and requiring voter ID to request and cast absentee ballots, along with other minor provisions.

However, it quickly became a cause celebre for politicians and major corporations, and even prompted Major League Baseball to move its 2021 All-Star game out of the Peach State.

The left mobilized with claims of racist intent, somehow uncovering secret racism so well-hidden within a mundane law.

President Joe Biden was the worst race-baiter when he said the law “makes Jim Crow look like Jim Eagle” in a March news conference.

The die had been cast for Senate Bill 202, and opponents have gone all-in on claims Georgia passed a racist voter suppression law.

Because this characterization is as meritless as it is malicious, it was easy to trip Abrams up as she gave her testimony to the Senate Judiciary Committee on Tuesday during the “Jim Crow 2021: The Latest Assault on the Right to Vote” hearing.

Republican Sen. Lindsey Graham of South Carolina pressed Abrams with a series of simple questions about each of the Georgia law’s main provisions.

“My question for Ms. Abrams: Do you support voter identification laws?” Graham asked.

“Yes,” Abrams said. “There are 35 states in the United States that have had voter identification laws,” she pointed out.

“In fact, every state requires some form of identification. What I’ve objected to is restrictive voter identification laws that narrow the set of permissible materials –“

“The answer is ‘yes’ as a concept,” Graham broke in to pin down her response. “Do you support the idea that voting should be limited to American citizens?”

“Do you support ballot harvesting? Are you familiar with that term?” Graham asked, referring to a scheme where several voters’ absentee ballots are rounded up — and sometimes even filled out — by an unauthorized person or group.

While the practice can be an earnest effort to help people cast their votes, it’s also extremely vulnerable to voter fraud — hence voter ID laws for absentee voting.

Likely knowing what Graham was trying to chip away at, Abrams explained she supported a particular scenario where “it is appropriate for tribal elders to collect the ballots and retrieve them and use a single source of delivery” for Native Americans on tribal lands with limited access to polls.

Graham then asked if she supported the practice “beyond Native American voting,” to which Abrams said “it depends on the situation,” adding that “each of those behaviors should be examined for utility and for veracity.”

“Do you believe the Republican majority in Georgia — House, Senate — when they are making the changes to your state voting laws, do you think they’re motivated by trying to suppress the African-American vote?” Graham asked.

“I have seen it happen,” Abrams shockingly charged. “I believe the motivation behind certain provisions in S.B. 202 are a direct result to the increased participation of communities of color in the 2020 and 2021 elections,” she said, citing the addition of voter laws each year as her evidence.

Then Graham asked her if these racist laws meant that Georgia Speaker Pro Tempore Jan Jones is herself a racist.

Abrams said she wouldn’t “assume that that racial animus is shared by every person,” but that if the law prevented black people from voting, it was a racist law.

This illogical explanation is typical for the systemic racism crowd as they paradoxically claim that entire societal structures are rife with vicious racism even as individuals within that system may not be racist.

But it was Republican Texas Sen. John Cornyn who finally forced Abrams to stretch the whole illogical premise to its breaking point.

He pointedly asked Abrams if she thought “the Georgia legislature made deliberate attempts to suppress the minority vote?”

Do you think the Georgia election law has anything to do with race?

Her affirmative reply led him to ask whether she believed other states such as Connecticut, New Hampshire, Delaware and New York — all Democrat-run — were also racist since their absentee ballot procedures were even stricter than Georgia.

Abrams said they were “behind the eight ball” but that only Georgia targeted minority communities and launched into a lengthy discussion without ever actually giving evidence.

She still claimed to support voter ID on the whole, however.

Aside from pointing out that a lot of black people used absentee ballots, she didn’t quite make the case for how requiring ID was targeting only minority voters. (How insulting is it that she believes black voters are not capable of producing some kind of ID?)

“So voter ID without malintent is OK?” Cornyn went on to ask.

“No, sir, that’s not what I said,” Abrams replied before Cornyn just went on to the next witness.

Of all the things the left has labeled racist, white supremacy, Jim Crow, etc., applying it to the law in Georgia is the most puzzling.

Not only is the left’s reaction to a single state’s legislation outsized to its influence, but it also doesn’t make sense that asking for voters to produce ID targets one race over another.

But for the left, there doesn’t have to be a shred of evidence that it’s true — just the charge is enough to send leftist Democratic politicians and their minions in corporations and the media out into the world parroting their narrative.

At the heart of voter ID laws is the idea that only legally cast votes should count, a concept that makes elections free and fair for every legitimate voter.

There’s no valid reason to object to that unless the Democratic Party is worried that without ballot harvesting and fraudulent votes, their politicians don’t stand a chance in a state like Georgia.

For them to call any racially neutral law in America “Jim Crow” is ugly, morally wrong repugnant and needlessly inflammatory.

If the left continues on this trajectory, it will only serve to stoke racial division where there was none while cheapening the experience of those who really lived through segregation.

They won’t care how unpopular that makes them, of course — as long as they can use it to stop these laws that prevent fraud, they won’t have to worry about losing any votes.