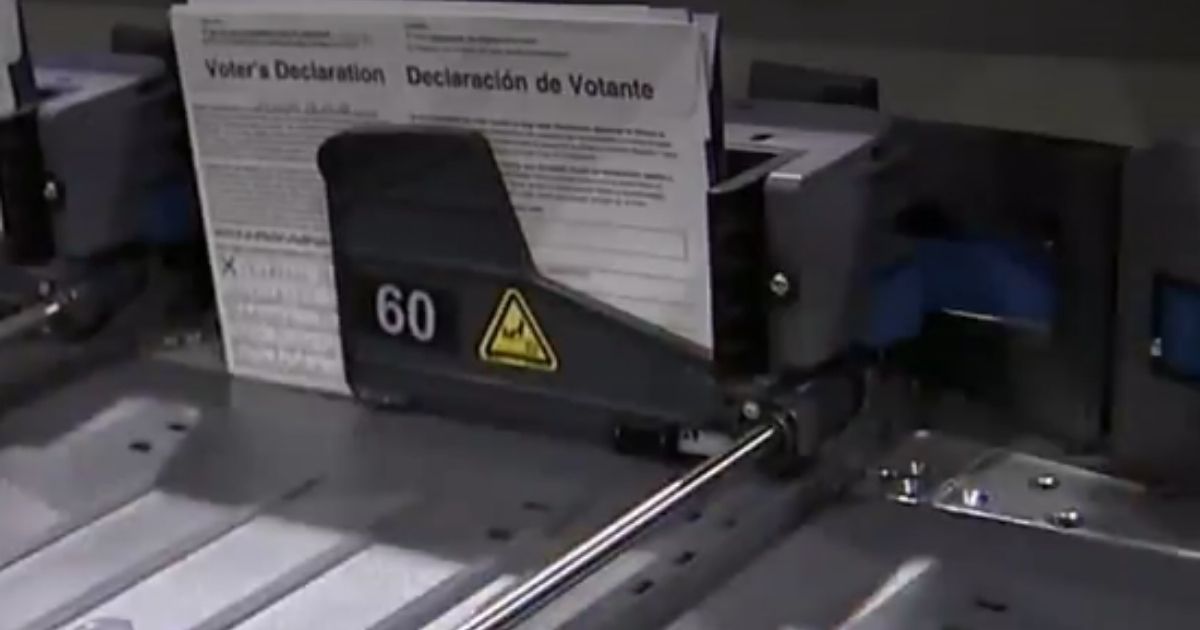 Voters in Tarrant County, Texas, might be feeling rejected after officials said last week that electronic ballot-scanning machines had kicked out about a third of the mail-in ballots that had been processed.

More than 22,000 ballots have been rejected so far, KTXA-TV reported Thursday.

Tarrant County Elections Administrator Heider Garcia said the problem is the printing on ballots that were mailed to voters. He said the issue was noticed Oct. 25 when staff members who were scanning ballots into the computer system noticed a large number that could not be processed.

“We started noticing about a third of them were being rejected by the scanners when they’re imaged,” Garcia told county commissioners, according to WFAA-TV.

“What we believe at this point is that the print shop that did these ballots for us … basically can improve the quality of the printing because those bar codes are not 100 percent legible, 100 percent of the time,” he also said, according to KXAS-TV.

Tarrant, Texas’ fourth-most-populous county with an estimated 2.1 million people, used to do its own printing but outsourced the job to Runbeck Election Services in Phoenix this year in anticipation of a massive increase in the number of mail-in ballots it would need printed.

“We were concerned to learn that some Tarrant County ballots are not able to be scanned properly by Hart Intercivic tabulation machines, as Runbeck Election Services is a certified ballot printer for Hart Intercivic. This election year alone we have printed nearly 100 million ballots, many of which have been the same type of ballot used in Tarrant County, without experiencing any scanning issues,” Runbeck said in a statement.

The company said it is working with Tarrant County election officials to look into whether the problem is printing- or scanning-related.

Has the use of mail-in ballots distorted this election?

“Once the investigation is complete, we will offer our support to all partners and vendors involved to determine the appropriate next steps to ensure that all ballots are properly tabulated,” Runbeck said.

Tarrant County has workers putting in 12-hour shifts because each ballot must be replicated before it is entered to be counted.

Garcia said there always are ballots rejected because of damage, but not this many.

Tarrant County has about 1.2 million registered voters, according to KXAS. One of those having problems this election season was Meredith Reilly, a 20-year-old junior at American University in Washington, D.C.

Reilly applied to Tarrant County this past summer for an absentee ballot, but it never arrived, according to the Fort Worth Star-Telegram.

“About a month or so ago, I hadn’t heard anything back, so I checked the website and my request hadn’t been processed,” she said. “My name wasn’t in the system. Nothing.”

She and a fellow Texan at the university who had a similar problem took the option they thought was open for voters who wanted to make their voices heard — they drove from D.C. to Fort Worth.

She and her friend made the 20-hour drive so they could vote early, get some sleep, and then head back to school.

“Neither of us were planning on coming home to Texas for Thanksgiving. We were going to stay in the Northeast,” Reilly said. “We just had to make sure our votes counted for the presidential election, as well as down ballot.”

Garcia said there was no ballot request on file for Reilly.

“There is nothing we can do if the request does not get here,” Garcia said. “By law we have to have the original request in house before a ballot is issued.”

Meredith’s father, Jimmy Reilly, said he was doubly pleased with the surprise visit.

“I’m so happy I get to see her,” Jimmy said. “And I’m really proud of the reason I am seeing her.”