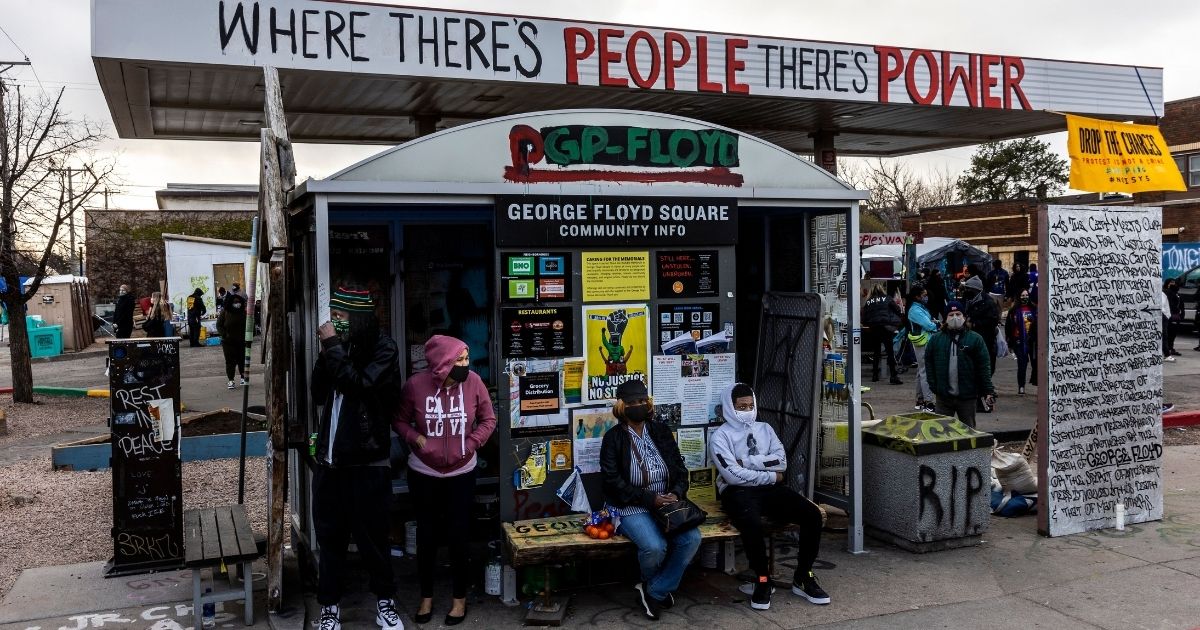 Lest white visitors to George Floyd Square in Minneapolis believe they can do as they please, a sign posted at the site where George Floyd died provides very specific instructions for how to behave.

A sign at the square calls it “A Sacred Space for Community, Public Grief, and Protest.”

The sign then adds some very detailed instructions under the heading “For White people in particular.”

White people about to enter George Floyd square are given special instructions pic.twitter.com/3gzpwqUmtS

TRENDING: Black Lives Matter Says Communities Are Being ‘Terrorized' More Under Biden Than They Were Under Trump

“Decenter yourself and come to listen, learn, mourn, and witness. Remember you are here to support, not to be supported,” the first line reads.

Whites are then told, “Be mindful of whether your volume, pace, and movements are supporting or undermining your efforts to decenter yourself.”

Without explaining how this is to be accomplished, the sign then instructs white visitors, “Seek to contribute to the energy of the space, rather than drain it. Bring your own processing to other white folks so that you will not harm BIPOC.” (BIPOC is an acronym that stands for Black, Indigenous and People of Color.)

“Consider if you want or need to take photos and post them. Do not take photos of other people without their consent,” the fourth direction to white visitors reads.

Is the left's goal to perpetuate racial divisions?

White people are finally urged by the sign to police other whites.

“If you witness white folks doing problematic things, speak up with compassion to take the burden of off Black folks and our siblings of color whenever appropriate. Seek to engage rather than escalate, so that it can be a learning moment rather than a disruption,” the sign reads.

The proclamation drew less than rave reviews on Twitter.

Are there any instructions that say, “Don’t use Fentanyl or Meth”?

RELATED: Derek Chauvin Is Now Being Held in Solitary Confinement for 23 Hours Per Day

What about mixed, Asian, Indian, Latinos??? And if there are mixed with white which rules do they follow… #askingforafriend

Nothing like trying to stir up more trouble! I can’t imagine what would happen if any place had a sign posted with special instructions for black people.

The square has been blocked off to traffic since last May.

City officials said they planned to reopen it to traffic after the trial of former Minneapolis police officer Derek Chauvin, who was found guilty this week of three murder and manslaughter charges in connection with Floyd’s death.

However, some of the activists who have controlled the site say they plan to remain until all trials related to Floyd’s death are completed, according to Fox News.

“The current state of the intersection known as George Floyd Square is contributing to the peace and safety of the surrounding neighborhoods,” a statement from the group claiming to represent those in George Floyd square said.

“Amid ongoing threats of White Supremacist violence, in the absence of justice, the barricades and community structures at 38th and Chicago should remain through the trial of all four officers. It’s problematic to misconstrue police brutality as progress toward racial healing.”