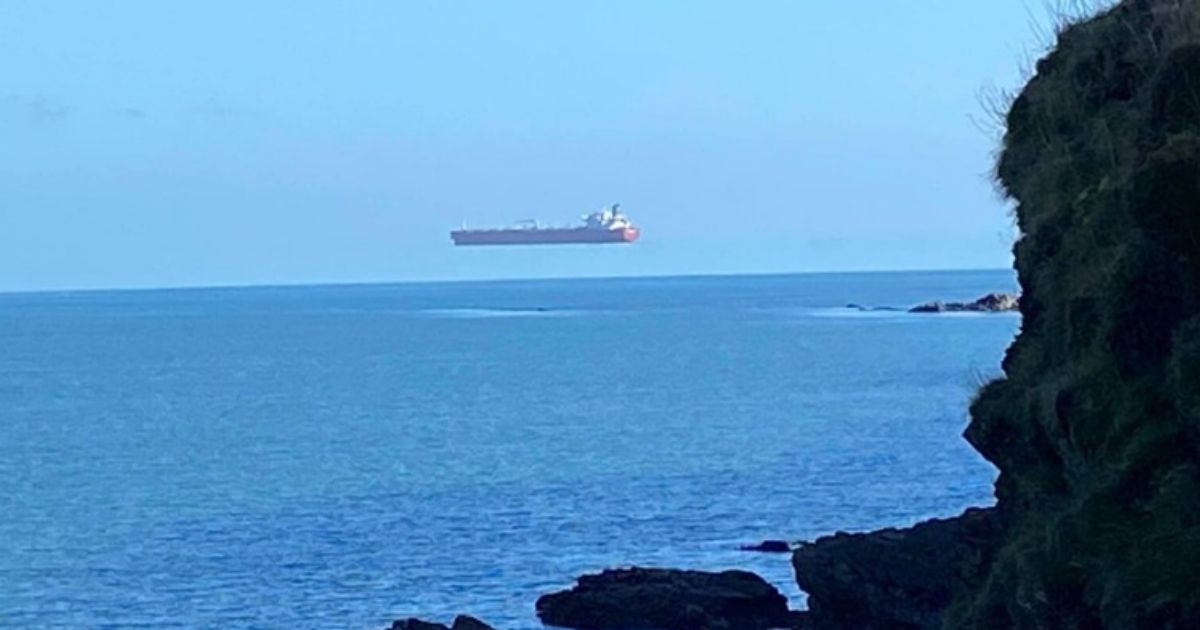 Who would ever think a ship could fly?

Well, only those who realize what is happening won’t be baffled by this image taken off the coast of England in early March near Falmouth, Cornwall, by area resident David Morris on his morning hike.

According to BBC News, meteorologist David Braine said “special atmospheric conditions that bend light” caused the “superior mirage” of a ship hovering above the sea.

A “superior mirage,” according to The Free Dictionary, is “a spurious image of an object formed above the object’s position by abnormal  refraction conditions.”

Basically, the “hovering ship” we see is the byproduct of temperature inversion, a weather condition in which cold air rests on the surface beneath warmer air, Braine said, according to the BBC.

The phenomenon is sure to baffle anyone who doesn’t realize what is happening.

“Since cold air is denser than warm air, it bends light towards the eyes of someone standing on the ground or on the coast, changing how a distant object appears,” Braine said, describing the event.

Do optical illusions increase your interest in environmental sciences?

He also said this illusion is rare in the United Kingdom in the winter but is more typical in the Arctic.

The unique image is sure to spark a lot of intrigue, especially considering that the event looks almost paranormal.

According to The New York Times, Dr. Claire Cisowski, a research fellow in optics at the University of Glasgow, likened the phenomenon to a straw in a glass of water or a hand dipped in the sea.

She explained that these illusions occur because “light travels through air and water at different speeds.”

Except, in this case, light traveled from air to air.

“Air is not always the same — it has different properties whether it’s cold or hot,” Cisowski said.

“So as light travels differently through these different layers, our brain tries to make sense of that.”

Basically, it all involves air density.

We might expect to find such optical illusions in a place as simple as our own kitchen, yet, on a place as grand as the open sea, the sight  surely would shock anyone except those who recognize what is happening.

We see stories of optical illusions all the time, but perhaps the unique aspect of all is that these are byproducts of our minds.

After all, seeing is believing.