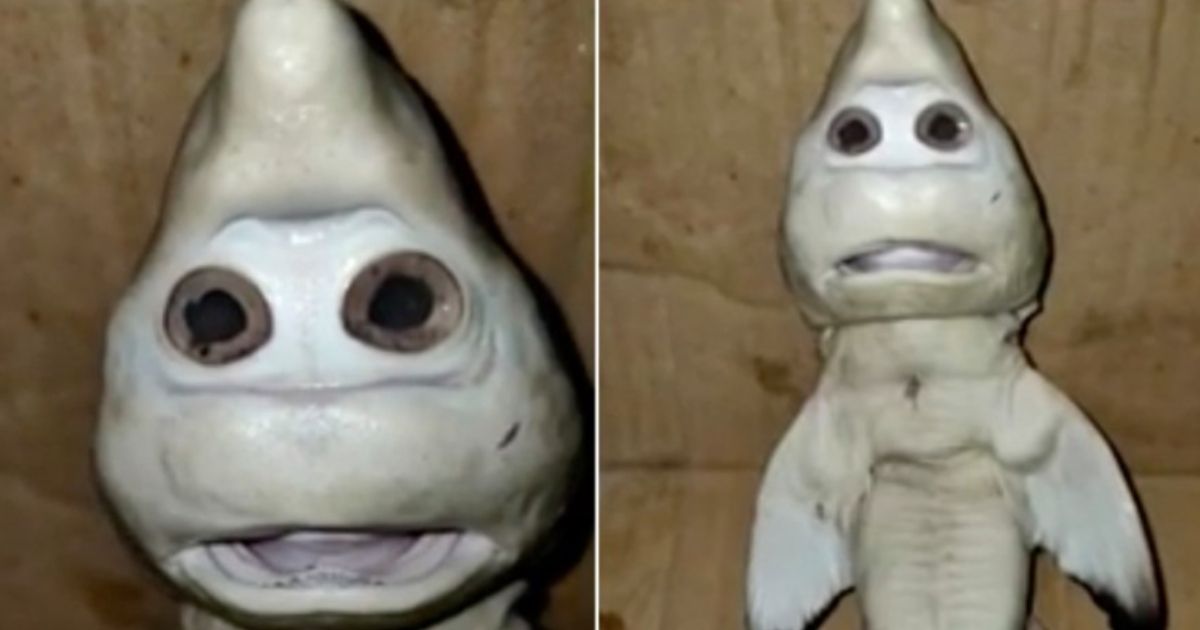 In fact, it sounds like the plot to a B-movie. For all I know, this is the setup for “Sharknado 8: Inexplicably Keeping Tara Reid and Ian Ziering Financially Solvent.” And yet, a mutant baby shark now is being considered one of the cutest things on the internet, proof we live in the strangest of possible timelines.

According to a story in the U.K. Daily Mail, 48-year-old Indonesian fisherman Abdullah Nuren was fishing in the waters off of East Nusa Tenggara province on Feb. 21 when he found the little shark guy by accident.

“I initially found a mother shark caught in the trawler net,” Nuren said. “The next day I split the belly of the mother shark and found three pups in the stomach.

A human face? Yes, this gets even weirder than “Sharknado”:

Now, this didn’t look eerily like a viral YouTube character to me. I was thinking more of the Michelin Man as a newborn, during that period when newborns look kind of ugly and wrinkly. (Let’s face it — you’ve all noticed this. Don’t pretend.)

But, no. This is the video everyone was thinking of. And if you’ve never heard this song — I’m so, so sorry. Please — don’t shoot the messenger:

This is “Baby Shark,” a children’s song that elevates “The Wheels on the Bus” to the artistic level of Vivaldi’s “Four Seasons.”

According to the New York Post, “Baby Shark’s” 7.04 billion views made it the most-watched song in YouTube history as of last November, replacing “Despacito” by rappers Luis Fonsi and Daddy Yankee.

If that’s the kind of quality music that gets YouTube hits, Nos. 3 and 4 have to be Billy Joel’s “We Didn’t Start the Fire” and Ruth Buzzi singing “99 Bottles of Beer,” respectively.

Anyhow, I digress. Nuren’s discovery led to social media fame for the fisherman and people listening to “Baby Shark” again, only one of which was a desirable outcome.

RELATED: Here’s Why This Remote Arctic Circle Base Is Fortified with a Heavy-Duty Fence

The two round eyes and seemingly human face obviously are some kind of genetic abnormality, not an evolution by which the shark gestating inside the mother was actually a step to making them more human.

Also, some people didn’t even think this looked too human. Here’s a prescription eyewear chain giving its two cents on the matter:

If you see a human face here, please contact your local store immediately.

Actually, don’t. Trust me: You’re better off not seeing the real thing.

For his part, Nuren is keeping the shark that made him famous. He took it home, and his family helped him preserve it. (We’ll assume he’s telling the truth about the shark, though Indonesia is far away from the U.S., making the story tough to confirm, and the fact-checking outlet Snopes said that “while it is entirely possible that this photograph accurately depicts an unborn shark cut from its mother’s womb,” the authenticity of the story is “unproven.”)

Does this shark look human to you?

“My home has been crowded with people who want to see the shark,” he said, according to the Daily Mail. “Many people want to buy it, but I will preserve it instead. I think it will bring me good luck.”

It brought him 15 minutes of Twitter fame, at least. Does he have a Twitter account? I didn’t see one, but I guarantee this guy could get a blue verified checkmark in an hour.

Give it another hour and the people who wrote “Baby Shark” will be following him.