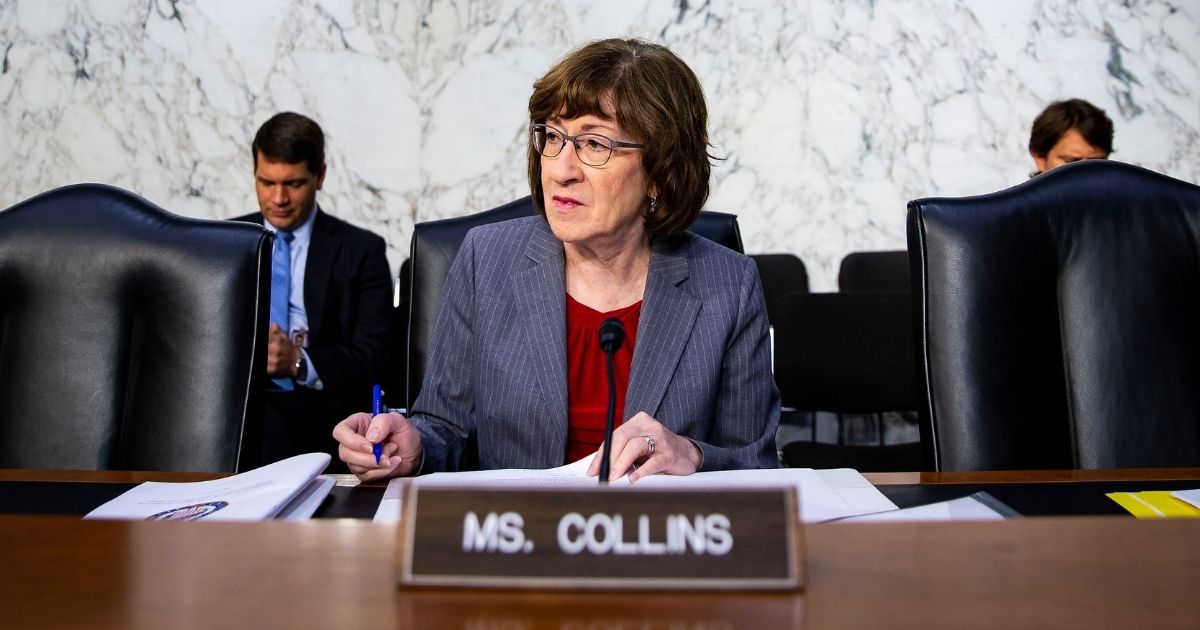 With the official nomination still forthcoming, it would seem Senate Republicans have already whipped up enough votes to fill the Supreme Court vacancy left by Justice Ruth Bader Ginsburg’s death — but GOP defectors are already emerging to make it an unnecessarily close call.

According to CNN, Republican Sen. Susan Collins of Maine clarified Tuesday that she would vote in opposition to President Donald Trump’s nominee for the seat, were it put to a simple majority vote on the Senate floor before the 2020 presidential election on Nov. 3.

“My statement was a model of clarity,” Collins told reporters at the U.S. Capitol. “I made it very clear, yes, that I did not think there should be a vote prior to the election. And if there is one, I would oppose the nominee.”

“Not because I might not support that nominee under normal circumstances, but we’re simply too close to the election, and in the interest of being fair to the American people — and consistent, since it was with the Garland nomination,” the senator added.

“The decision was made not to proceed, a decision that I disagreed with, but my position did not prevail. I now think we need to play by the same set of rules.”

TRENDING: Watch: GOP Candidate Klacik Gets Kicked Off of ‘The View’ for Calling Out Behar’s Blackface Scandal

Then, I sincerely hope the voters with @mainegop withhold their vote from @SenSusanCollins as well. https://t.co/0MsK2i1KdG

Collins left American political audiences in the dark this weekend with regard to her vote, releasing an official statement in celebration of Ginsburg’s life and legal accomplishments Friday night before going on to express distaste for her Republican colleagues’ eagerness to fill the seat.

“I do not believe that the Senate should vote on the nominee prior to the election,” the senator said. “In fairness to the American people, who will either be re-electing the President or selecting a new one, the decision on a lifetime appointment to the Supreme Court should be made by the President who is elected on November 3rd.”

Do you think GOP senators opposing Trump’s third Supreme Court nominee should be voted out of office?

She was not the first GOP senator to speak out in pre-emptive opposition, however, and she may not be the last.

Sen. Lisa Murkowski of Alaska had been quick to the starting gun Friday night, telling reporters she “would not vote to confirm a Supreme Court nominee” within hours of Ginsburg’s death.

“We are 50-some days away from an election,” Murkowski said. “That was too close to an election, and that the people needed to decide. That the closer you get to an election, that argument becomes even more important.”

It is worth noting that all other likely defectors have already signaled their willingness to confirm the forthcoming nominee.

As of yet, however, not every vote is publicly accounted for.

This, in turn, means circumstances are still subject to change and others may still break ranks, whether out of respect for some misplaced sense of principle or in the interest of bolstering some misguided political calculation.

Whatever the reason may be, the conservative response should be far less flimsy.

Such action should be met with excommunication and career execution. These figures must be made an example out of.

In fact, it is my hope that, for Collins and all those RINOs who would seek to oppose this nomination, Nov. 3 is the bloodiest Tuesday in American political history.

Seen this, @SenSusanCollins? Your opponent is quite literally campaigning on your support for Trump judicial nominees.

Opting to oppose this one SCOTUS nominee won’t stop that.

If these figures truly believe standing between their GOP colleagues and an opportunity to institute a 6-3 conservative majority on the court is a principled decision, their values sit so far outside the Republican mainstream that they ought not to call themselves Republicans at all. In the current political climate, one does not put their own subjective sense of decorum and arbitrary fairness before the ideological interests of the party.

If they otherwise favor standing in opposition for the sake of winning a handful of independents and moderate Democrats, however, the prognosis is far worse: They are cowardly clods. The conservative movement is bigger than any one candidate, and our elected representatives must be big enough to take an electoral hit for the sake of things like a lifetime appointment to the highest court in the land. Instead, folks like Collins seem willing to slight the base in favor of playing the middle these days.

Either way, the play is a fool’s errand.

Collins has trailed her opponent Sara Gideon in the polls by a substantial margin since as early as June, according to RealClearPolitics.

And alienating the base just six weeks before Election Day clearly won’t be doing anything to bump those numbers.

Quite the opposite, in fact. It should send the base running for the hills.

Heck, if I were a Republican Mainer, I would consider pulling the lever for Gideon outright.

At least with her, you know what you’re getting.

Susan Collins, on the other hand, can’t even be counted on to vote for her own party’s Supreme Court nominee.