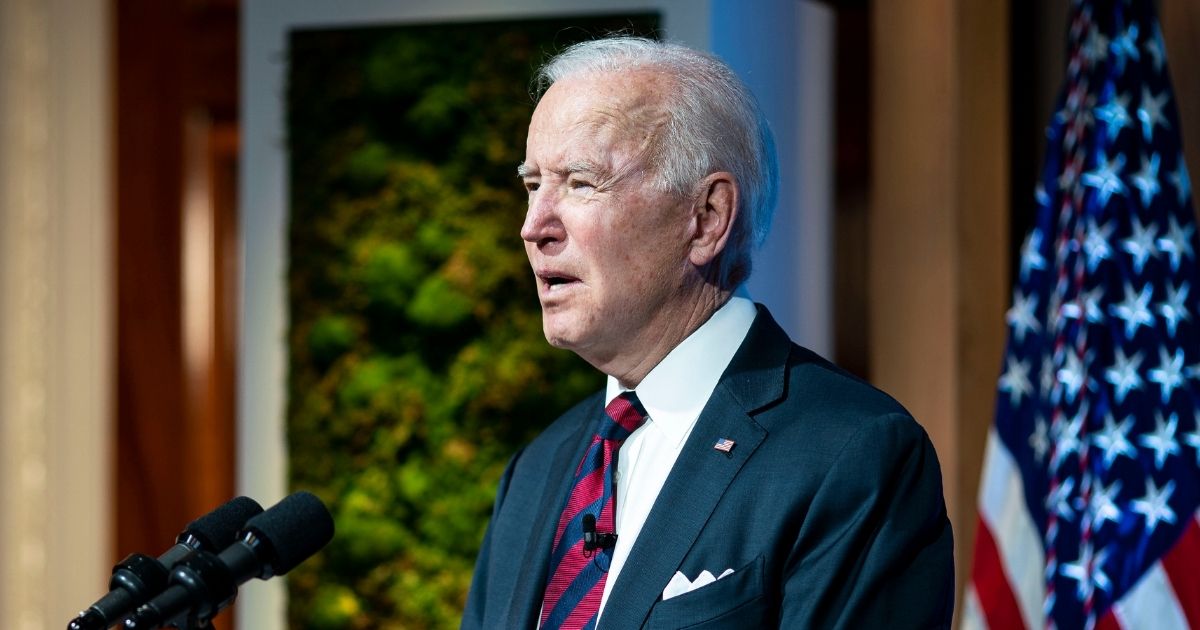 Has President Joe Biden finally popped the market bubble and brought about the beginning of the end of the robust Trump economy?

The Dow Jones Industrial Average on Thursday plunged significantly, as did other indexes, once reports broke that the Democrat is preparing to propose doubling the capital gains tax rate as high as 43.4 percent for taxpayers who earn $1 million or more, Bloomberg reported.

NEW: Biden to propose almost doubling the capital gains tax rate for the wealthy to 39.6%. Coupled with an existing tax on investment income, that means that federal tax rates for investors could be as high as 43.4%.

The Dow fell sharply more than 300 points, the S&P 500 sunk 38 points and the Nasdaq fell 132 points on the reports that Biden will be coming after high earners, according to the index numbers reported by CNBC.

TRENDING: Black Lives Matter Says Communities Are Being ‘Terrorized' More Under Biden Than They Were Under Trump

Biden’s reported plan was excoriated by popular traders, average Americans and others online for startling investors and hurting the portfolios of countless middle-class traders.

Barstool Sports founder and popular investor Dave Portnoy, who is perhaps the face of populist market participation, lashed out at Biden:

Others were also quick to pounce on the anti-free market Democrat:

The people who told you so.

Curious how the stock market traders who voted for Biden feel about Biden’s 43.4% capital gains tax ?

Just kidding I actually don’t care how you feel because we told you this would happen.

RELATED: Biden Touting His Infrastructure Plan by Touring Company His Energy Sec Owns Up to $5 Million in Stock In

If threatening high capital gain taxes crashes the market, then there will be little capital gains to tax. 🤔🤷🏻‍♂️

Beginning in 2020, amid an economic climate that rebounded and defied gloomy predictions, more Americans than ever began investing their money in companies as the market reached new heights. Many of those people have been wondering when the forever bear market might collapse.

As of Thursday morning, despite ups and downs, the market has remained healthy.

But nothing scares investors and the wealthy more than Democrats and their plans for increased taxation on success. Their collective anxiety led to a sell-off to end the trading day.

Average investors and lower earners who have participated in the record economy that began under former President Donald Trump are affected when the wealthy begin a sell-off, as they did Thursday.

Were you affected personally by Thursday's sell-off?

Those whose 401(k) plans rely on a robust economy are also adversely affected when Democrats begin threatening profits.

A lowering tide sinks all boats. The middle class will ultimately pay as people seeking to cash in on their own ingenuity head elsewhere or sit on their hands and capital.

Biden and Democrats might be under the impression they are going after the top 1 percent of Americans by seeking to raise taxes on capital gains. In this day and age, such propositions spook investors and, by proxy, hurt millions of working middle-class Americans in the process.

The wealthy, no matter how much they’re taxed when selling property, stock shares, or companies and collecting realized profits, will get through such a tax burden, should it take effect. That, or they will go somewhere where they can conduct business freely.

Other less wealthy Americans will pay dearly for high capital gains tax rates. It appears as though Biden’s reported plans Thursday cost millions of normal Americans millions of dollars — and that might just be the beginning.