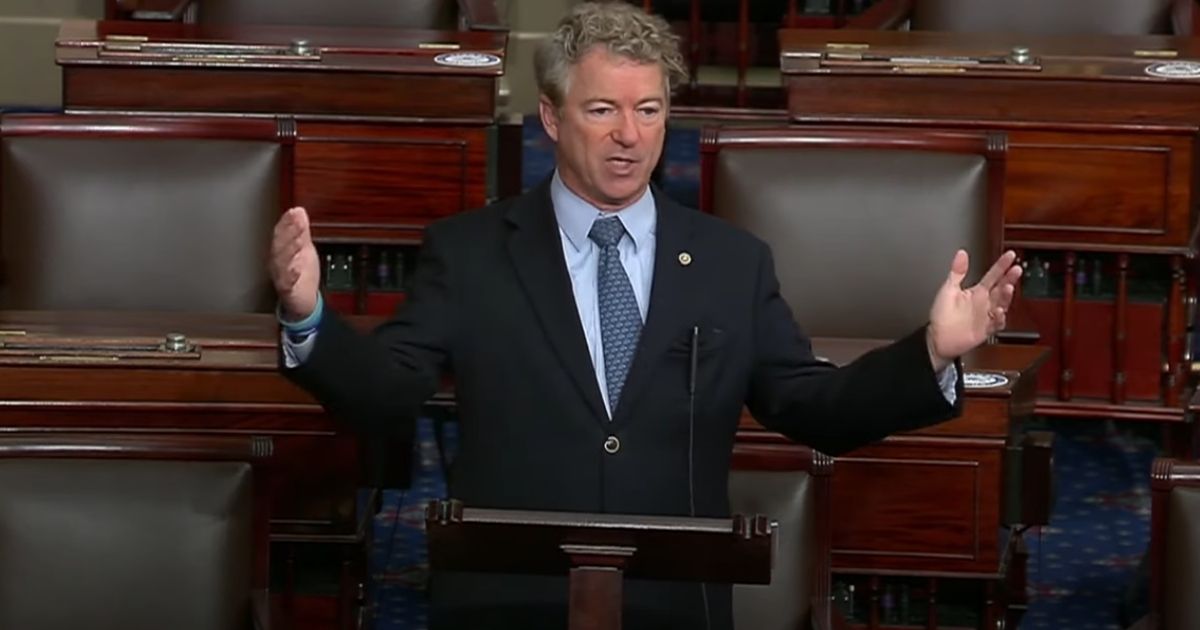 Republican Sen. Rand Paul of Kentucky on Monday denounced the $900 billion COVID-19 relief legislation that was later passed by the Senate as “free money” that will doom future generations to drown in the nation’s debt.

The bill was approved 91-6, with Paul joined in opposition by Republican Sens. Rick Scott of Florida, Mike Lee of Utah, Marsha Blackburn of Tennessee, Ted Cruz of Texas and Ron Johnson of Wisconsin, according to Fox News.

In a floor speech on Monday, the libertarian-leaning Paul said the “monstrous spending bill we are presented with today is not just a deficits-don’t-matter disaster, it is everything Republicans say they don’t believe in.”

Paul said the bill is rooted in the concept that deficits do not matter.

“Most Republicans rightly lampoon this quackery — that is, when they’re not practicing the quackery themselves,” he said.

“This bill is free money for everyone,” he said.

In a speech laden with sarcasm, Paul said if the goal of the legislation was to dole out as many dollars as possible, the limits it included should be raised.

Do you agree with Sen. Rand Paul?

“If we can print up money with impunity, why not do it?” Paul said.

“The Treasury can just keep printing the money. That is, until somebody points out that the emperor has no clothes and that the dollar no longer has value.”

Paul said the stakes of the bill’s passage are great.

“To so-called conservatives who are quick to identify the socialism of Democrats: If you vote for this spending monstrosity, you are no better,” Paul said.

RELATED: Rand Paul: Masks Mandates Are ‘All About Submission’

“When you vote to pass out free money, you lose your soul and you abandon forever any semblance of moral or fiscal integrity.”

Paul continued his attack on the bill on Twitter.

Until then, the dead will continue to vote and to cash government checks.

In his speech, Paul noted that the nation cannot afford to spend what he termed “tomorrow’s money.”

“We are $27 trillion in debt today. How do we expect a child to have the economic opportunity when this crushing debt is their inheritance from Congress?” he said.

“It’s clear that government has worsened the economic damage and acted as the biggest obstacle to economic recovery,” he said.

And Congress is making it worse, he argued.

“We are borrowing and worsening this debt crisis, in part, because too many governors and mayors have imposed heavy-handed restrictions that crush business,” Paul said.

“Every bailout dollar printed and passed out to the governors only allows these tinpot dictators to perpetuate the lockdowns.”