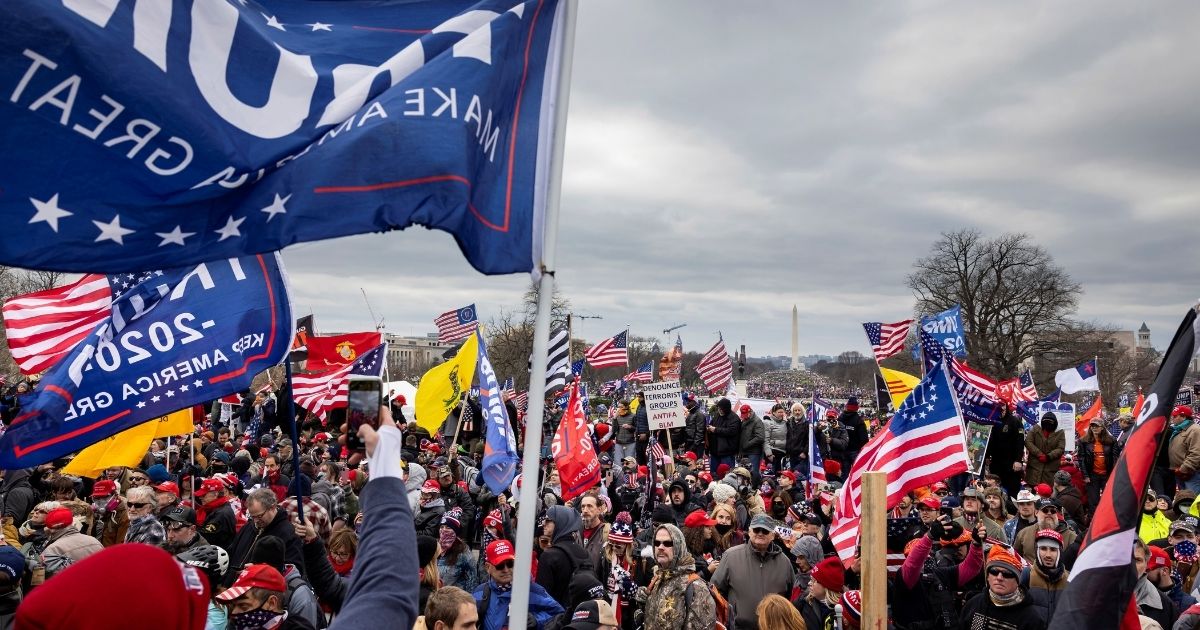 Choosing between former President Donald Trump and the GOP is no choice at all for many Republicans, according to a new poll.

A Suffolk University/USA Today poll shows that 46 percent of the Trump supporters surveyed last week — after Democrats failed in their bid to convict former President Donald Trump in his second impeachment trial — said they would flee the Republican Party if Trump creates a new party of his own, according to USA Today.

The poll found 27 percent of those surveyed would stay with the GOP; the balance was undecided. The survey was of 1,000 Trump voters, based on 2020 polls and the margin of error was 3.1 percentage points.

54 percent said they are loyal to Trump, but only 34 percent to the GOP.

If he were to run, the poll found 76 percent of those surveyed said they would support him for the party’s nomination, and 85 percent would vote for him in a general election.

“We feel like Republicans don’t fight enough for us, and we all see Donald Trump fighting for us as hard as he can, every single day,” Brandon Keidl, 27, a Republican from Milwaukee, said.

“But then you have establishment Republicans who just agree with establishment Democrats and everything, and they don’t ever push back.”

In a post-impeachment statement that followed Senate Minority Leader Mitch McConnell’s condemnation of Trump’s actions on the day of the Capitol incursion, Trump lashed out at McConnell.

Would you join a new party if Donald Trump was the founder?

“The Republican Party can never again be respected or strong with political ‘leaders’ like Sen. Mitch McConnell at its helm,” he said.

“McConnell’s dedication to business as usual, status quo policies, together with his lack of political insight, wisdom, skill, and personality, has rapidly driven him from Majority Leader to Minority Leader, and it will only get worse.

“The Democrats and Chuck Schumer play McConnell like a fiddle — they’ve never had it so good — and they want to keep it that way! We know our America First agenda is a winner, not McConnell’s Beltway First agenda or Biden’s America Last,” Trump wrote.

Trump’s thoughts about the future of the Republican Party are expected to be a central theme of remarks he will make Sunday to the Conservative Political Action Conference.

Of those polled by USA Today, half said the Republican Party should be “more loyal to Trump,” even if establishment Republicans remain aloof from the party.

RELATED: Look What Trump Just Said When Asked About Running in 2024

Only 19 percent said the establishment should win the tug-of-war for the future of the party.

Those surveyed said support for Trump during impeachment could dictate how they vote. Eighty percent said they would be less likely to support a Republican who supported impeaching the former president.

More than 90 percent of respondents dismissed claims that Trump incited the violence of Jan. 6.

Calling Trump responsible is “insane,” said Jane Wiles, 76, of  Treasure Island, Florida. “Was he there? No. Unless he was there leading the pack, he is not responsible.”

Trump last week indicated he will be a political force to be reckoned with for anyone who aligns themselves with McConnell.

“Mitch is a dour, sullen, and unsmiling political hack, and if Republican Senators are going to stay with him, they will not win again,” Trump wrote.

“He will never do what needs to be done, or what is right for our Country. Where necessary and appropriate, I will back primary rivals who espouse Making America Great Again and our policy of America First. We want brilliant, strong, thoughtful, and compassionate leadership.”