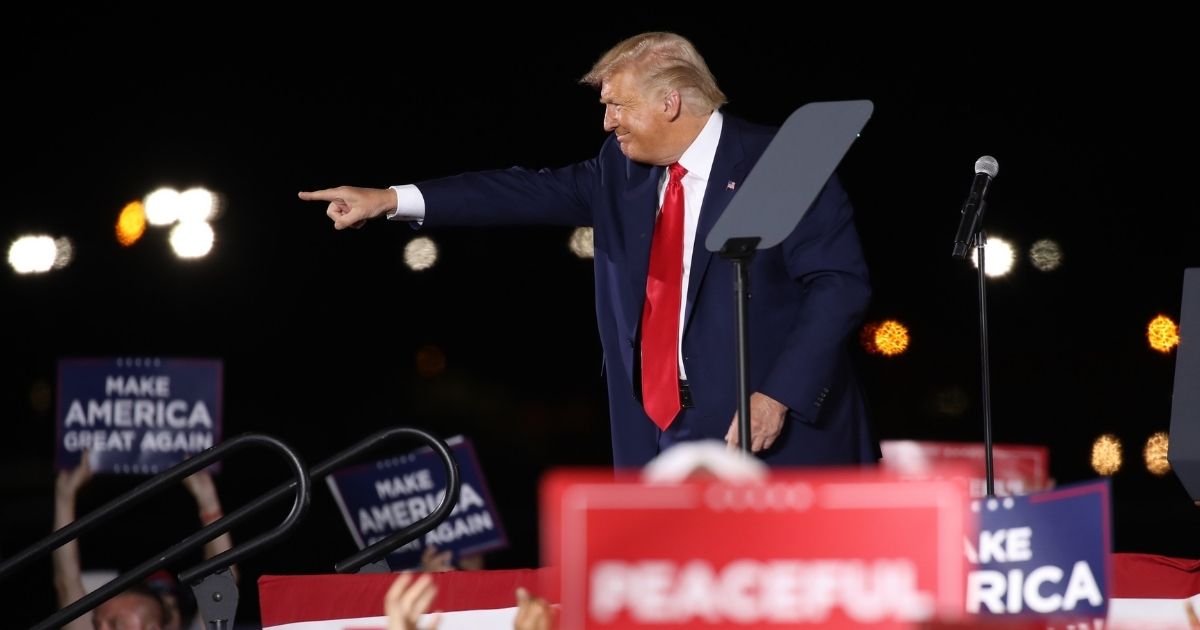 According to the RealClearPolitics polling average, Joe Biden is up nationally by 7 percentage points.

In five of the major battleground states — Pennsylvania, Ohio, Michigan, Wisconsin and Arizona — Biden’s average lead is 3 points or greater. He’s also competitive in other states Democrats would almost never be considered contenders in, particularly Texas and Georgia.

Even if you don’t pay attention to these things, you probably know that Joe Biden is supposed to be the favorite. Given everything that’s happened over the past few months, it makes sense he’s the odds-on favorite to be the next occupant of the Oval Office.

So why is it that a majority of Americans view Donald Trump as likely to win in November?

In a Gallup poll taken between Sept. 14 and Sept. 28, 56 percent of respondents said they thought Trump would end up victorious on Nov. 3 (or whenever the ballots are counted), compared with only 40 percent who thought that Biden would win.

That wasn’t the only good news in the poll for the president, either.

“In Gallup polling conducted over the two weeks leading up to the first presidential debate, President Donald Trump’s job approval rating is 46%, its highest point since May,” a Thursday media release from Gallup read.

“Although still short of the majority approval that incumbent presidents typically need in order to be confident of reelection, more Americans say they expect he, rather than Joe Biden, will win the election.”

“Trump started the year with the highest approval rating of his presidency (49%) amid his acquittal on impeachment charges, but it subsequently descended to the 38% to 42% range during the summer as the coronavirus pandemic, the resulting economic downturn, and racial injustice issues afflicted the nation.”

Will Donald Trump win the 2020 election?

The results were part of the Gallup Poll Special Series, a monthly phone survey which polls “a minimum of 1,000 U.S. adults aged 18 and older.” In this case, 1,023 Americans living in all 50 states and Washington, D.C., were surveyed, with a margin of error of +/- 4 percentage points.

All of these numbers come with relatively sizable asterisks attached to them.

New: @Gallup has @realDonaldTrump up. And, they said, “56% expect Trump will win the election; 40% think Biden will.”

Post-Debate, Trump is ‘on the rise again,’ said @Rasmussen_Poll.https://t.co/JXELLt2EXz pic.twitter.com/VH3aInQvH1

First, the Gallup Poll Social Series isn’t quite as scientific as most of Gallup’s other work; it’s meant to gauge where the country is at the moment without necessarily reaching for exactitude. For instance, the GPSS polls survey U.S. adults, not likely or even registered voters. This introduces a greater degree of uncertainty into the numbers.

Second, all of this was done before the first debate on Tuesday, a chaotic affair which produced divided reactions — particularly among an establishment media which couldn’t decide whether to wring their hands or go apoplectic. Rasmussen’s post-debate polling found that Biden held an edge in terms of who viewers thought won the debate, but that one-fifth of those who watched weren’t sure who emerged victorious.

“The latest Rasmussen Reports national telephone and online survey finds that 84% of Likely U.S. Voters watched at least part of the first presidential debate between Trump and Biden. Of these voters, 44% say Biden won versus 36% who claim Trump is the winner. But 20% are not sure,” the polling firm said in a Friday media release.

“Thirteen percent (13%) of the debate watchers said the debate changed their mind about whom they’re going to vote for.”

Other good news: “The older the voter, the more likely they are to believe Biden won the debate. But roughly 20% of voters of all ages are undecided. Those under 40 are far more likely than their elders to say the debate changed their mind about whom they’re going to vote for.”

In other words, through extrapolation, it seems voters who felt Trump did better were more likely to have changed their mind.

The survey of 1,000 likely voters, with a margin of error of +/-3 percentage points, found most Republicans felt Trump won the debate while most Democrats thought Biden did. While the question went unasked, I think we can all agree pretty much everyone thought Chris Wallace was the night’s unequivocal loser.

Finally, both of these polls were conducted before the news that Trump had been diagnosed with COVID-19 — which put future debates into question and could recontextualize the presidential contest.

That said, given the tenor of the contest so far, it’s curious to note respondents to the Gallup poll thought Trump was more likely to win by a 56 percent to 40 percent margin.

The history of the poll isn’t always right, mind you.

In September 2000, 52 percent of respondents thought Al Gore would beat George W. Bush, compared to only 35 percent who thought Bush would win. In October 2016, 58 percent thought Hillary Clinton would beat Donald Trump compared to only 31 percent who said Trump would be the winner. Respondents in the Gallup poll have guessed correctly in every other race since 1996, however.

Why the discrepancy, then? Perhaps Americans know enough to not trust polls. Democrats, having been burned in 2016, could be pessimistic about their chances.

Whatever the case, President Trump — and his supporters — will be more than happy to take it.