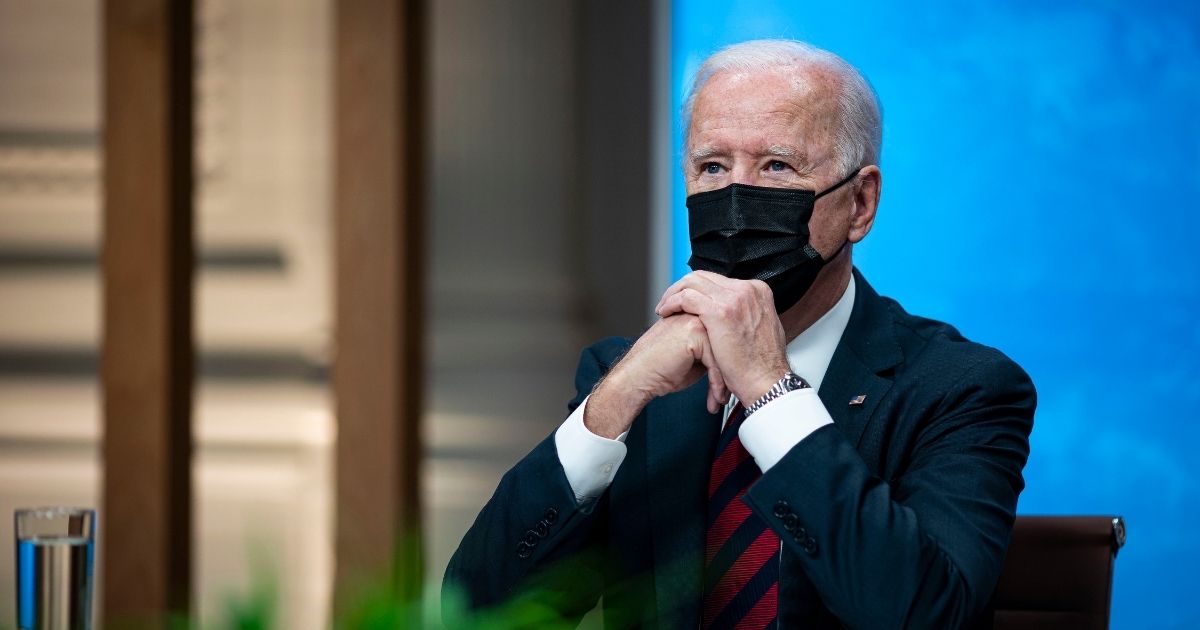 President Joe Biden stood out among 40 world leaders on the first day of the virtual Earth Day climate summit on Thursday for two reasons and neither was positive.

Biden was the only head of state to wear a mask — at a virtual event. And he is fully vaccinated. Did he really believe he was in danger of contracting COVID-19 or was he just virtue signaling?

The reason doesn’t make a difference.

What does matter is that he represents America and he set himself up to look like an idiot on the world stage.

This is not a good look for the leader of the free world.

The second takeaway from this photo is that there is no American flag behind him. Is he not proud of the nation he represents, which was once the greatest nation on the planet? I needn’t even ask that question. Biden’s actions over the past three months have only served to diminish America.

A president who loves his country wouldn’t undermine it on a regular basis. But here he is, among his peers in the global arena, the only leader without the flag of his country in the backdrop.

Pres. Biden masks up for a video call to discuss climate change with world leaders

He appears to be the only one wearing a mask pic.twitter.com/TGGuM7BW0x

President Joe Biden unveiled the goal to cut emissions by 50%-52% from 2005 levels at the start of a two-day climate summit that kicked off on #EarthDay and was attended virtually by leaders of 40 countries including big emitters China, India and Russia https://t.co/18zJOhaPUC pic.twitter.com/Z9JWvfPbjK

It may come as a surprise to Biden and his inner circle to hear that the world does not respect them. Biden’s handlers, by limiting his engagements, and the media, by providing mostly positive coverage of him and his administration, may believe they’ve fooled the American people.

And they very well may have fooled some Americans. But the vast majority of people understand that he has suffered some degree of cognitive decline since leaving the White House in 2017.

Foreigners see the situation with Biden clearly. There have been brutally honest assessments of Biden in the Australian and British media.

In February, Sky News anchor (and former member of parliament from South Australia) Cory Bernardi took aim at Biden for the first time.

He began his monolog by telling viewers, “Never before has the leader of the free world been so cognitively compromised. It’s clear to me at the least that US President Joe Biden is struggling with dementia and is clearly not up to the task he’s been sworn in to do.”

He called the U.S. media the “Biden Protection Racket.”

In March, a second Sky News Australia anchor, Alan Jones, smoked the media over their coverage of Biden and his presidency. “How does the western world survive and democracy thrive if there’s not honest, objective assessment of this already flawed president?” he asks rhetorically.

Both Bernardi and Jones have delivered follow-up monologs as well.

Powerline’s Scott Johnson discovered another report in March, this one from the U.K. In a post cleverly entitled, “But He Hasn’t Got Anything On,” Johnson writes that “the mainstream media are playing the part of the courtiers and townsfolk in ‘The emperor’s new clothes.’ Along comes historian and Spectator deputy editor Dominic Green to play the part of the little child in the Telegraph column “President Biden is crumbling before our eyes.”

The candidate who campaigned on bringing respect back to the White House after four years of former President Donald Trump has failed spectacularly.

Now Biden is hosting this event. Why? His administration sees climate change as an international issue, something that “globalists” can solve together — a one-world order style fix. “This is the decade we must make decisions that will avoid the worst consequences of the climate crisis,” he told his fellow globalists.

And he presented the group with America’s ambitious goal to cut greenhouse gas emissions by 50 percent to 52 percent from 2005 levels, according to Reuters.

Aside from the fact that he has no respect for Biden, the so-called “climate crisis” is of no concern to Chinese President Xi Jinping. He has more important priorities — like making China the most powerful nation on earth — by every measure.

An article published in the South China Moon Post after Special Presidential Envoy John Kerry’s humiliating trip to Shanghai last week (please see Kerry’s bus photo below), implied that China views the U.S. attempt to get them to reduce emissions as trying to stifle their economic growth.

Pang Zhongying, an international affairs specialist at the Ocean University of China, told the Post, “Beijing regards US demands on climate as part of Washington’s grand strategy to curb China’s economic growth and force China to give up its energy-intensive, highly polluting development model.”

But applying pressure on China’s GDP isn’t the Biden Administration’s only motivation. Nor is their plan to use the “climate crisis” to establish a one-party rule in America.

Chinese put John Kerry at the back of the bus…

Made him wait for officials to meet him pic.twitter.com/kuiAGcNNox

The #CCP hired a bus from a travel company for John Kerry, and no longer arranges for officials at the state councilor level to meet him. How humiliating.https://t.co/58VQgzfnoM

Team Biden’s unstated purpose for arranging this climate change summit just may be that they are aiming for a one-world government. And we just might have just witnessed the first scene of the play.