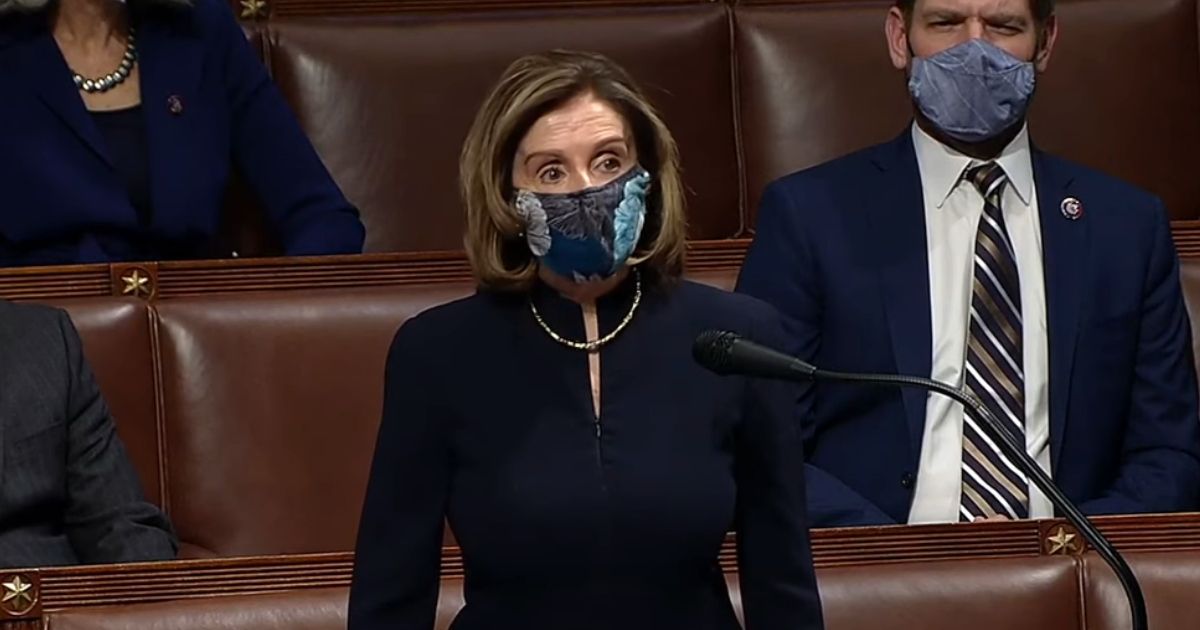 House Speaker Nancy Pelosi, who has proposed banning the use of gendered language in the House, couldn’t help but fall back on some of that language during Wednesday’s impeachment proceedings.

Prior to digging into what happened Wednesday, let’s go through the background of how Pelosi again found herself the butt of the joke. The Democrat-run House introduced new rules specifically designed to replace language regarding gender when used in reference to the family members of lawmakers.

Pelosi on Jan. 1 issued a news release that said, in part, “Congress will address issues of inequities on the basis of race, color, ethnicity, religion, sex, sexual orientation, gender identity, disability, age, or national origin; honor all gender identities by changing pronouns and familial relationships in the House rules to be gender neutral.”

On Page 5 of the edicts for the new 117th Congress, a section on “gender-inclusive language” offers that “seamen” should be replaced by “seafarers” while “chairman” and “chairwoman” would be retired for the word “chair.”

House Minority Leader Kevin McCarthy was among those lucid few who were quick to dismiss the absurdity of Pelosi’s new rules.

The entire spectacle is, as McCarthy stated, stupid. Can the California Republican get an amen or an awoman?

“Their first act as this new Congress could have been to make sure that elderly Americans are able to get the COVID vaccine now alongside front-line health care workers. … But instead of doing something that could actually help save people’s lives, they’re choosing instead to say, ‘Well, you can’t say “mother” or “father” in any of this congressional language.’ It’s astounding,” Gabbard told Fox News.

Less than two weeks later, Pelosi herself disregarded the laughable proposed ban on gendered language when making her case for the second time in a year to urge her House colleagues to impeach President Donald Trump.

Democrats were successful in impeaching the president, but Pelosi made a joke of herself as much as she did a mockery of government.

“I stand before you as a wife, a mother, a grandmother, a daughter, a daughter whose father proudly served in this Congress,” the California spouse, parent, grandparent and child of a parent and former congressperson blathered.

While Democrats were busy attempting to ban gendered language in the House two weeks ago, Americans were begging for a lifeline from a government that has been failing them for a year. Weeks later, giddy about the prospect of a second Trump impeachment, Pelosi couldn’t help but make the moment about herself.

In doing so, she proved that her proposed ban on traditional gender language was one big virtue signal.

After the week our country has been through, it wasn’t bad enough that millions of Americans potentially face being targeted for their political views. Pelosi and Democrats ramped up the fear and division by again impeaching the duly elected president who represents many of those people.

Pelosi the congressperson couldn’t even get that right, at least not with regard to using the new rules for decorum and language she helped to craft and wants in place.

Our government is no longer a serious entity made up of stable people. The Congress is a a national embarrassment, and the only thing clear after Wednesday is that Democrats, and even some Republicans, hold all of us, and those who came before them, in contempt.

What an honor it must be to have been impeached twice by this body of clowns.