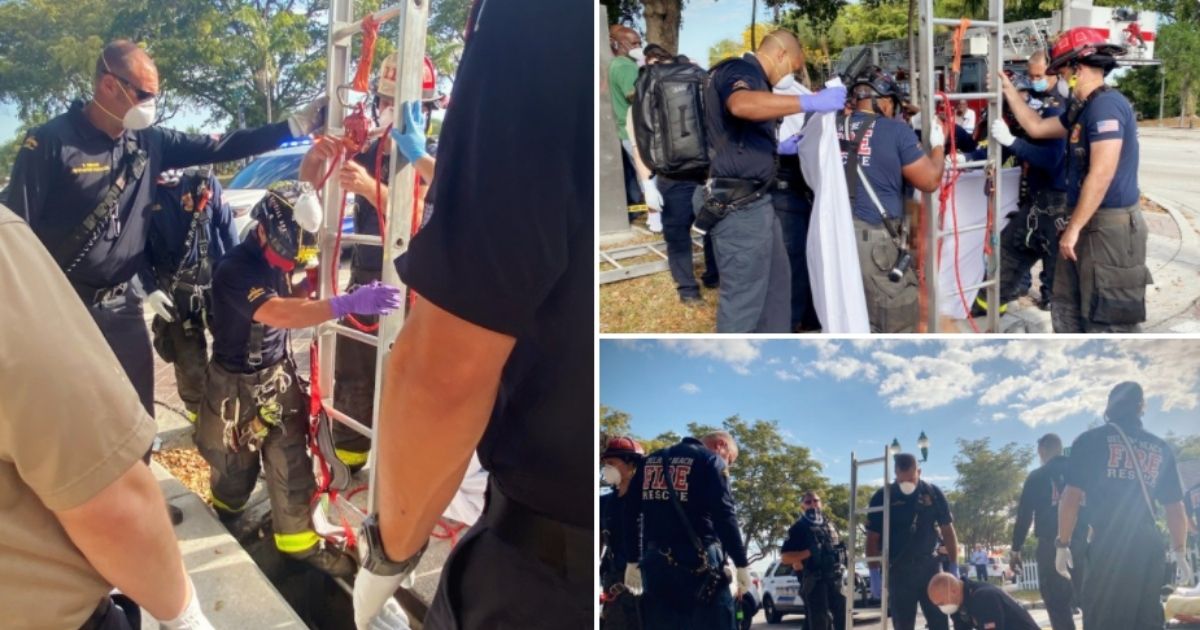 A naked woman was rescued from a storm drain in Delray Beach, Florida, on Tuesday, telling police she had been trapped “for weeks” in the maze of tunnels and drains beneath the city.

Delray Beach Fire Rescue said a citizen called 911 just before 9 a.m. on Tuesday after hearing the woman scream for help from the 8-foot-deep drain, according to Newsweek.

Police later identified the woman as Lyndsey Jane Kennedy, 43, of Delray Beach, according to WPTV-TV. Her boyfriend had reported her missing on March 3.

Firefighters said they removed a grate over the drain and then lifted out the woman, who was taken to a hospital for observation.

911 AUDIO!! listen to the call made to police when a woman was found in a storm drain yesterday in Delray Beach. You can hear more tonight at 5PM @CBS12 https://t.co/9nCmjM9VAj pic.twitter.com/HlsYKOnfIL

“She was lucky. I don’t know how much longer she would have been OK down there,” Delray Beach Fire Rescue spokesperson Dani Moschella told Newsweek.

Do you believe the woman’s story?

“The idea that somebody might be down there for any length of time is disturbing. It’s dirty, dangerous, there are snakes, rats, garbage, dirt and leaves, anything that’s on the street that washes into a sewer, and it smells terrible.”

Police are skeptical about Kennedy’s story, according to WPTV. They said they aren’t sure how long she was stuck in the drain.

“She mentioned she had been in the storm drain for weeks,” Delray Beach Police Department spokesman Ted White said. “We from the police department standpoint find it very hard to believe that she spent that amount of time down there. You need food and water, and so some things don’t add up.

“She did mention that she found an unopened bottle of ginger ale, and that is what she drank. We find it hard to believe right now.”

However, Michael Hahn — a friend of Kennedy’s — read a statement from her family in support of her story, according to another WPTV report.

RELATED: ‘Heroic’ Rescuers Save Couple from Pickup Truck Dangling 100 Feet in the Air

Kennedy told her family she found a tunnel while swimming in a canal in Delray Beach. One tunnel led to another and soon, she told them, she had no idea how to get back to where she had entered the maze.

A missing person’s report filed with Palm Beach County Sheriff’s Office on March 3 indicated there was a concern that Kennedy, who had a history of drug use and mental health issues, might have relapsed on drugs, according to WPTV.

Police said it not appear any crime was committed during the ordeal and that they are still investigating.

Hahn said Thursday that Kennedy has been through a “very traumatic situation” and needs time to recover.

“The family is so thankful for everyone’s concerns but needs some time to heal,” Hahn said. “At this point, the family is asking for complete privacy.”

He said Kennedy didn’t eat anything while she was trapped in the drain and drank only the ginger ale she found. Hahn said Kennedy remains weak from the experience and is recovering with her mother.

“The family is so thankful for everyone’s concerns but needs some time to heal,” Hahn said, according to WPTV. “At this point, the family is asking for complete privacy.”

Hahn pushed back against police skepticism.

“The only thing I would say is what’s been reported already is pretty accurate as to what occurred, and that’s all I can say,” Hahn said.