Home Daily News Paranoid AOC: I Feared Members of Congress Might Help Kidnappers Get Me 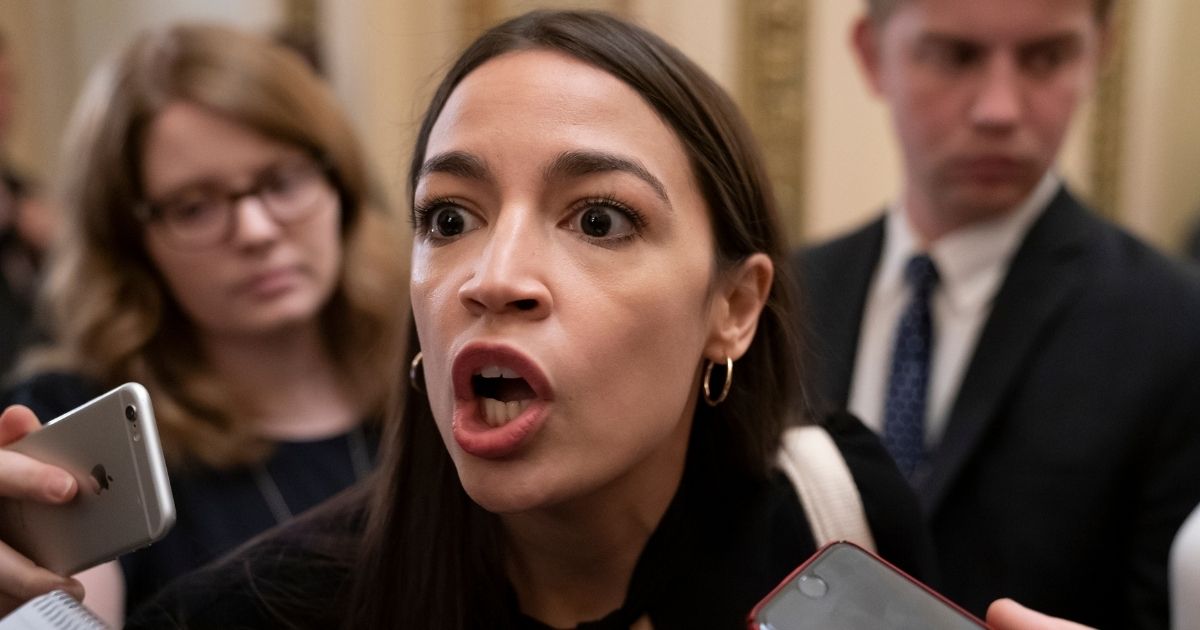 If Rep. Alexandria Ocasio-Cortez feels unsafe in the Capitol, she doesn’t have to show up.

At this point, it seems like that might be the only viable option for the New York Democrat. She skipped the inauguration of newly elected President Joe Biden because she said she was afraid of members of Congress. Then, on several widely-covered Instagram Live feeds, she claimed that she thought she was “going to die” during the Capitol incursion.

It turns out she wasn’t even in a building breached by the rioters.

We’ll get to that in a bit, but I think we need to examine her Instagram Live streams, because some of the claims she’s made border on farcical — and yet, they’ve been accepted at face value by the establishment media.

First, let’s get this out of the way: Ocasio-Cortez said she was a victim of sexual assault during a Monday live stream. To say that before a huge Instagram audience — up to 150,000 people, according to NBC News — is both difficult and brave. No one should minimize her pain and trauma.

TRENDING: Mike Huckabee: The Inevitable Backlash Against the Dems Has Started Already, And Here’s Even More Good News

That said, it doesn’t objectively change what happened at the Capitol on Jan. 6. Past pain and trauma don’t entitle her to a separate set of facts. If you haven’t seen the live streams or her reports of what happened that day, you may not know how wild some of Ocasio-Cortez’s claims are.

In her Jan. 12 live stream, for instance, she said she believed she was in danger from Republican lawmakers who might kidnap her.

As she described the events that transpired during the riot, she talked about going to the protected “extraction point,” where lawmakers would be safely removed from the Capitol. Even though it was only her colleagues, she said she still didn’t feel safe.

“[T]here were QAnon and white supremacist sympathizers and, frankly, white supremacist members of Congress in that extraction point who I know and who I have felt would disclose my location and would create opportunities to allow me to be hurt, kidnapped, et cetera,” she said, according to Elle.

Do you believe AOC was threatened by GOP legislators?

“So I didn’t even feel safe around other members of Congress.”

Which members of Congress? No names are proffered, although the allusion to Georgia GOP Rep. Marjorie Taylor Greene (rather infamous at the moment for her outlandish social media digressions on QAnon and Rothschild-funded space lasers, among other things) wasn’t lost on anyone.

Later, she also claimed Republican Sen. Ted Cruz of Texas tried to have her killed, so maybe he was lumped into that group:

I am happy to work with Republicans on this issue where there’s common ground, but you almost had me murdered 3 weeks ago so you can sit this one out.

Happy to work w/ almost any other GOP that aren’t trying to get me killed.

In the meantime if you want to help, you can resign. https://t.co/4mVREbaqqm

RELATED: Mike Rowe Just Gave the Biden Administration a Lesson on the Truth About Fossil Fuels

No members of Congress apparently tried to have her kidnapped or killed, so thank heaven for that small mercy.

Ocasio-Cortez originally said that “I can tell you that I had a very close encounter where I thought I was going to die.” What was this close encounter? In a Monday live stream, she said an intruder entered her office, which led her legislative director to tell her to “hide, hide, run and hide.”

“And so I run back into my office,” Ocasio-Cortez said, according to Newsweek. “I slam my door. There’s another kind of like back area to my office, and I open it, and there’s a closet and a bathroom. And I jump into my bathroom.”

She was reportedly hiding behind the door “and then I just start to hear these yells of, ‘Where is she?’”

Ocasio-Cortez said, “this was the moment where I thought everything was over.”

Who was it? Some bloodthirsty Proud Boy with zip-tie handcuffs? Um, try a Capitol policeman.

But a problematic member of the Capitol Police! AOC said that it “didn’t feel right because he was looking at me with a tremendous amount of anger and hostility.” She also claimed the Capitol policeman didn’t identify himself.

“We couldn’t read if this was like a good situation or a bad situation,” Ocasio-Cortez said, “and it was like so many other communities in this country like just that presence doesn’t necessarily give you a clear signal if you’re safe or not.”

Well, the Capitol Police may not be AOC’s thing, but it’s a whole lot better than the alternative.

Nevertheless, this was covered breathlessly by the media, and not always accurately. Newsweek, for instance, originally said that rioters had breached Ocasio-Cortez’s office:

.@AOC made clear she didn’t know who was at her door. Breathless attempts by media to fan fictitious news flames are dangerous.

My office is 2 doors down. Insurrectionists never stormed our hallway. Egregious doesn’t even begin to cover it. Is there nothing MSM won’t politicize? pic.twitter.com/Tl1GiPSOft

As swings and misses go, that’s a pretty big one.

Ocasio-Cortez’s live streams are emotionally charged and usually fact-free. The problem is that her words are covered like gospel in the media. The events of Jan. 6 were undoubtedly traumatic for everyone in the halls of Congress, but this doesn’t give those individuals license to make patently absurd claims about “white supremacist” GOP legislators having them kidnapped.

Matt Walsh of The Daily Wire may have put it best:

The real story is that AOC was in her office and then a cop came and told her to evacuate. The end. That was her entire involvement in that day’s events. She managed to turn that into a harrowing tale of narrowly avoiding death at the hands of assassins sent by Ted Cruz.

“The real story is that AOC was in her office and then a cop came and told her to evacuate. The end,” he tweeted Wednesday. “That was her entire involvement in that day’s events. She managed to turn that into a harrowing tale of narrowly avoiding death at the hands of assassins sent by Ted Cruz.”

The incursion into the Capitol was a hideous day in our country’s history, but that doesn’t mean AOC’s wild-eyed, Tom Clancy-esque claims of secret white supremacist Republicans who might try to have her kidnapped should be accepted at face value.

Extraordinary claims require extraordinary evidence. Ocasio-Cortez has none. All she has are emotionally charged Instagram Live chats. In her case, the media considers that an acceptable substitute for facts.