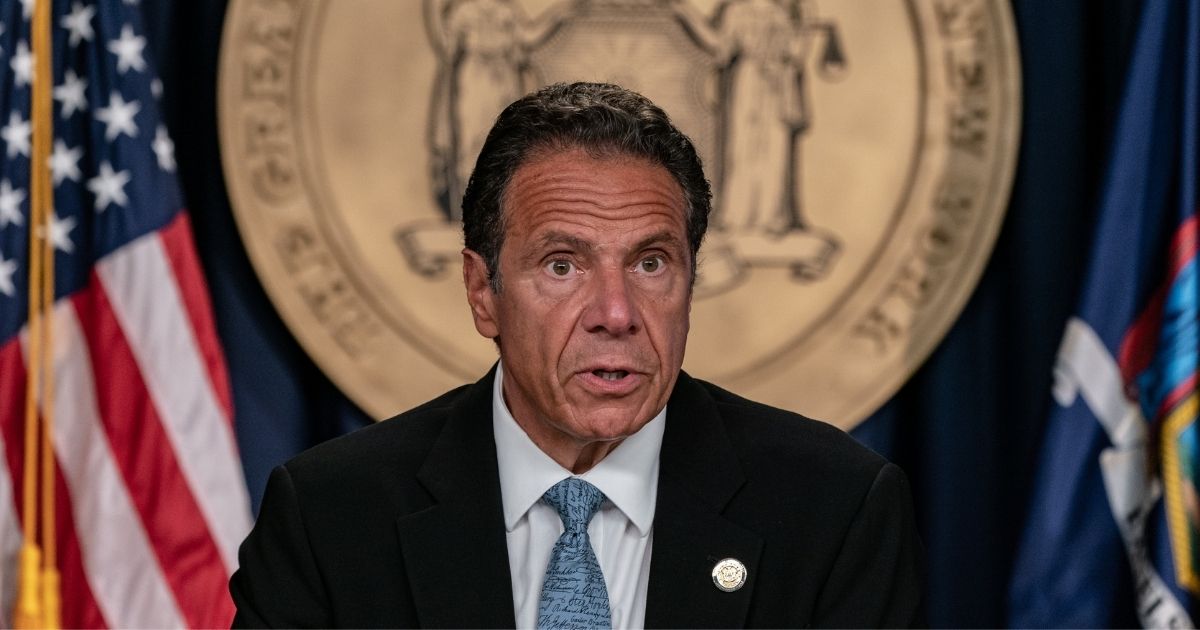 It’s been a football season tainted by divisive politics, thanks to the NFL’s very loud leftist social justice activism. But fans of one of New York’s football teams are now making their voices heard, and they’re using them to ask their team to ban Democratic New York Gov. Andrew Cuomo from a game this Saturday.

Fans of the 13-3 Buffalo Bills are gearing up for this weekend’s playoff game against the 11-5 Indianapolis Colts. The Bills are reportedly favored by 6.5 points in a game Cuomo has announced he will attend, but some fans find the governor so insufferable that they are asking he stay away from Bills Stadium.

New York football fans began circulating a petition on the matter, which picked up steam during the final week of the NFL regular season. A fan named Jeffrey Dorenzo started a Change.org petition last week, seeking 25,000 signatures to ban Cuomo from the game. As of Tuesday afternoon, the petition has collected over 26,000 signatures and counting.

The Bills football stadium remained closed to fans throughout the season, due to the draconian lockdown measures imposed by Cuomo as a result of the coronavirus pandemic. The upcoming match will be the Bills’ first home playoff game since 1996 — an event fans have awaited for decades.

“So Cuomo is going to attend our playoff game after telling us that we can only attend at less than 10% capacity? If he thinks he has more right to a seat in that stadium over people who have waited over 20 years for this opportunity, then people better be there to protest his entry,” wrote Dorenzo. “This is OUR team! This is OUR home. We don’t want you here.”

WKBW-TV reported that Cuomo announced last Wednesday he would only allow a limited number of fans to attend the game. The governor simultaneously said he would be among those fans present in Orchard Park, New York on game day.

Thanks to the Giants and the Jets both missing the playoffs, Cuomo only has the Bills fan base to target with more ridiculous rules. The governor’s decision to be among them at the game serves as a visual reminder of his oppression.

“I’m going to take my [COVID test], I’m going to be out there to watch the game with you, and we look forward to it,” Cuomo said to Bills owners, Kim and Terry Pegula.

Cuomo also tweeted about the playoff match, asking Bills fans to “be smart.”

NYS, @NFL and @BuffaloBills have come to an agreement to allow ~6,700 fans to attend the first home playoff game.

The stadium is outdoors. Every fan must test negative before game, wear a mask & social distance.

It will be a big game for the Bills, but one where only a select number of fans will be permitted to cheer on the team.

“Officials say 6,700 fans will be allowed inside the stadium. All fans must take a COVID-19 test and have proof of a negative test result within 72 hours of entering the stadium. Contact tracing will be done after the game,” WKBW-TV reported.

The state health department will “monitor testing and contact tracing,” the outlet confirmed.

“Masks and social distancing will be required at all times. Fans who refuse to comply will be removed from the stadium. Tailgating and mass gatherings will not be allowed,” it added.

Do you think Andew Cuomo is the worst governor in the country?

This game sure doesn’t sound like a lot of fun. But Bills fans are passionate, and the baggage of testing, contact tracing and wearing masks is a hassle many are glad to undertake to be there in person. They also apparently don’t mind the extra fees associated with all of the madness.

“Fans will be required to pay for their testing as part of their ticket purchase to cover all associated costs. BioReference Laboratories is providing each test for fans at a reduced cost of $63. There will also be an additional cost of $11 for parking,” the team announced in a news release.

But Cuomo is just too much baggage for some die-hards among the Bills Mafia, at least according to the petition — which, by the way, hasn’t led Cuomo to signal he intends to return his ticket yet.

Fans, and indeed all New Yorkers, should chalk this one up to yet another “rules for thee, but not for me” activity the governor is endorsing for himself, while putting average folks and loyal football fans out to pasture.

In case anyone was wondering, Cuomo and other New York officials haven’t canceled their paychecks amid the state’s absurd lockdowns on businesses and day-to-day activities since last March, when the pandemic began. In fact, Cuomo recently received a $25,000 pay raise, making him the nation’s highest paid governor.

He will now enjoy a seat to a game where roughly 65,000 seats will remain empty — costing the team revenue and robbing fans of an experience they would likely have never forgotten.

Bills fans have waited 25 years for their team to host a playoff game. With bars and restaurants under the gun in the Empire State, there will likely be very few watch parties. Most fans will have to watch from home — assuming Cuomo doesn’t ban television between now and Saturday.